For well over a decade and half Western Star’s custom show winning 4900FX’s dominated major Australian truck shows, inspiring dreams and driving sales to an enviable market share. These prestigious rigs were the inspiration of, the marketing head at the time, Pat Cook. We sent Howard Shanks to find out the story behind one of ‘Cookie’s Monsters’ … known as “The Gangster”. 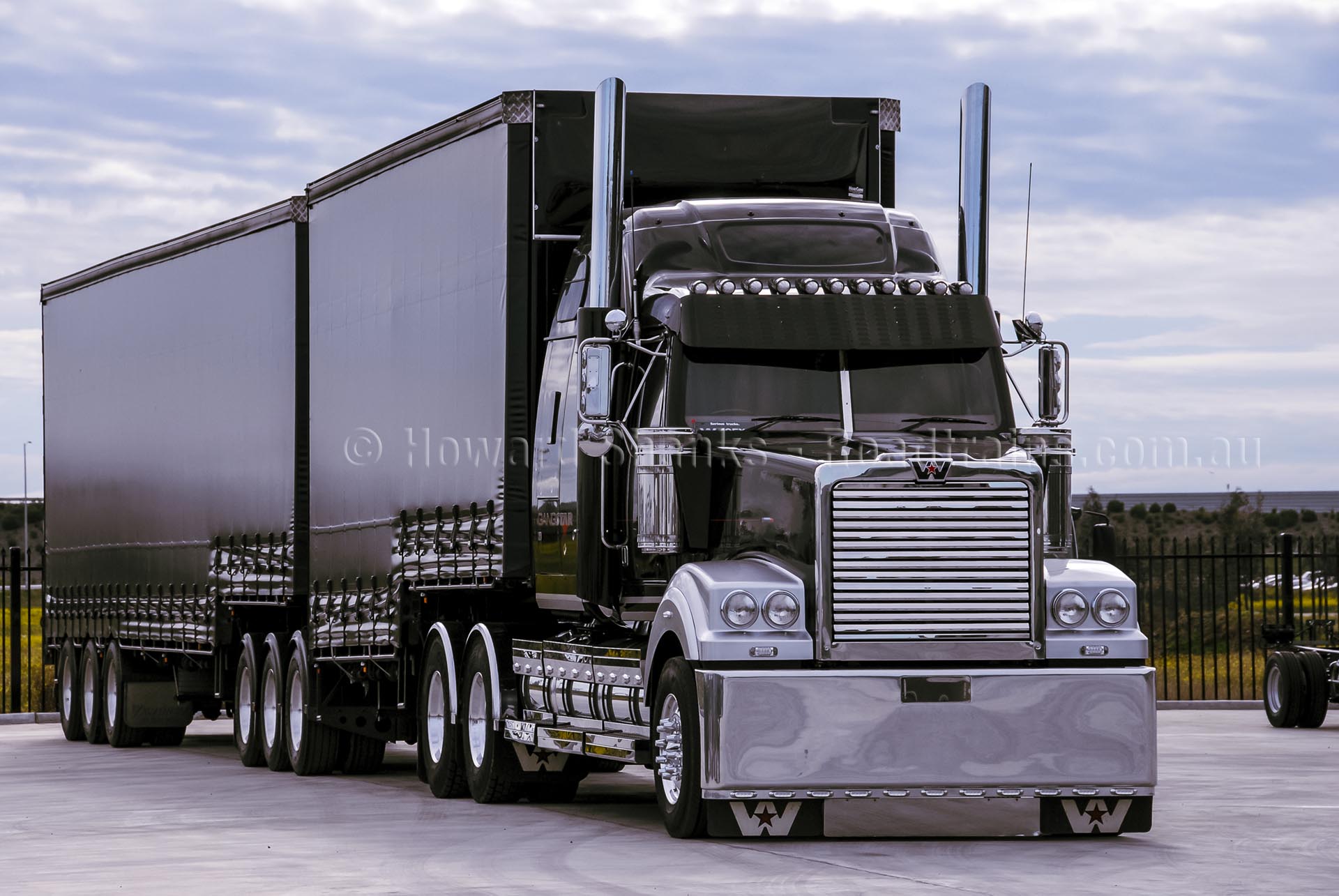 When you’re passionate about your truck it generally shows in the way you dress, walk and talk. Talk to Pat Cook for a few moments and its quickly apparent he is very passionate about trucks especially his Western Star stable.

While Pat concedes that each is work of art in its own right, the project also showcases new products available from their parts network and highlights the skills and talents of their suppliers.

“We start with clean sheet of paper and begin to build the truck from the ground up, traditionally with heavy-duty components that would suit a variety of applications, the we add some extra features to make it a special vehicle, Pat explained.

“We have a number of suppliers all around the country and for this unit we sent the truck to Melbourne based custom truck builder Leon Thorpe and his mate Daryl Maud of TransArt, Bendigo. Both have been around trucks and the industry for more years than they care to remember and when it comes to tricking out cool custom rigs they’d undoubtedly be at the top of most lists. 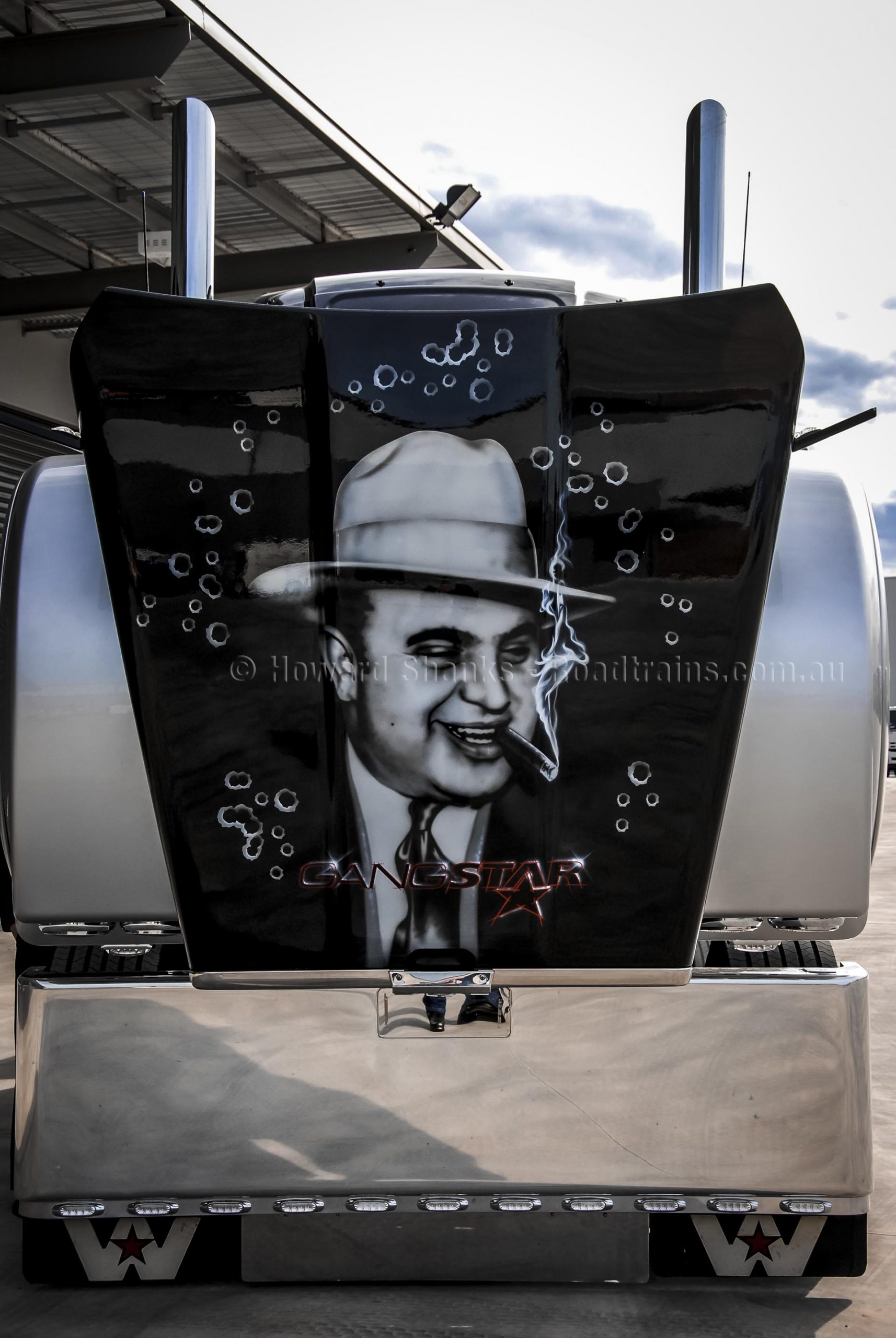 The canvas was blank, but instructions clear, Western Star (Australia) decided to tackle some truck shows with gusto with the primary goal of instilling confidence back into the industry still waning from effects of the global finance crisis.

“The idea at the time was to showcase their full product line-up and highlight the pride Western Star owners have in their rigs,” Pat recalled. “So the concept to fully customize a 4900FX was hatched.”

The chosen truck for the transformation was indeed a true Western Star heavy-duty unit, rated at 120-tonne, capable of hauling a triple road train. It boasts a Cummins Signature engine rated at 600hp punching out 2050 lb-ft torque coupled to an Eaton Fuller RTLO 22918B transmission. The rear suspension is Hendrickson Primax with Merritor RT50-160 final drives.

The luxurious cabin not only provides plenty of room for the lucky owner to spread out on the long hauls but it gave the custom builders a large piece of real estate to work their magic around the Constellation Cab that is coupled to a generous 68-inch Stratosphere Sleeper.

Tony Elkins, Westar-Melbourne’s, Sales Manager arranged for the stock 4900FX to be taken to Thorpe Custom Trucks where most of the custom fabrication would take place. 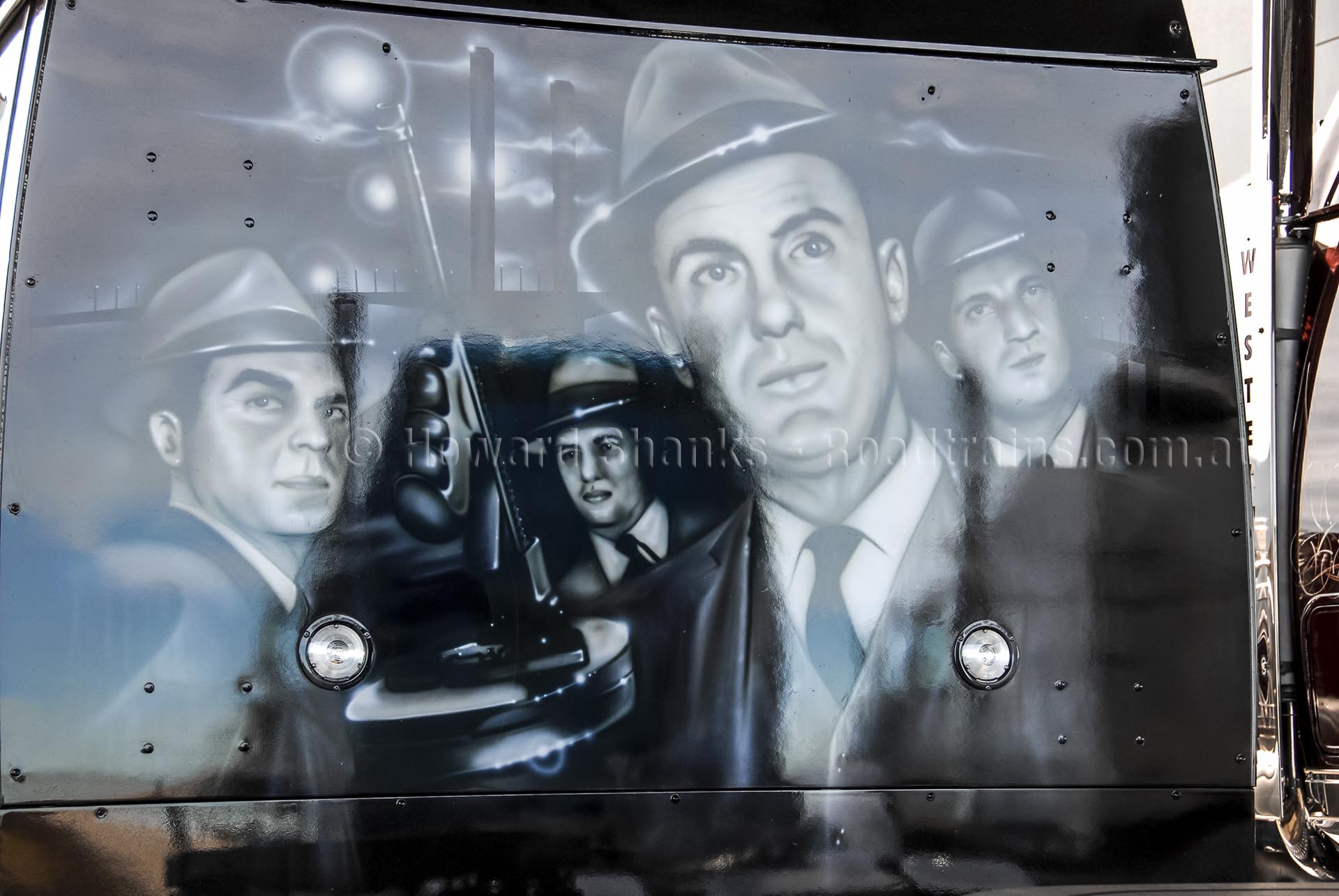 This scene depicts the legendary American Prohibition Agent, Eliot Ness, and his team dubbed “The Untouchables” who were responsible for bringing down Capone and his gang

“When we dropped it off at Leon’s (Thorpe Custom Trucks) we knew we wanted to end up with a cool rig,” Tony Elkins recalled. “But we didn’t really know how it would all come together, however Leon reassured us not worry as he had an idea.”

Leon Thorpe has a long history in road transport and was one of the original pioneers of truck customising in Australia. He cut his teeth on local cartage, with a Bedford tray truck before moving into the concrete cartage with International ACCO, a popular agitator truck of the day, and that’s where he reckons the customizing began. He replaced the original grill with one from a 3070, added Kenworth bullet lights, twin stacks and plenty of chrome…

When an opportunity came up to do an express run for Jetsroad, Leon jumped at the opportunity. He purchased a second hand truck, striped it down to the chassis and rebuilt it adding his personal touch to the refurbishment.

Ten years later he started a truck detailing business which including the fitting of Perspex parts along with chrome accessories, the first to commercially add “Bling” to trucks in Melbourne. After tricking up a number of show winning trucks the start of Thorpe Custom Trucks provided other owners a means of personalising their rigs. Meantime, Leon’s passion for the road saw him retain his original company Thorpe Interstate Transport Services (affectionately known as TITS), which now boasts over a dozen trucks hauling freight each night up and down the highways, even his stunning personal show trucks work for a living. 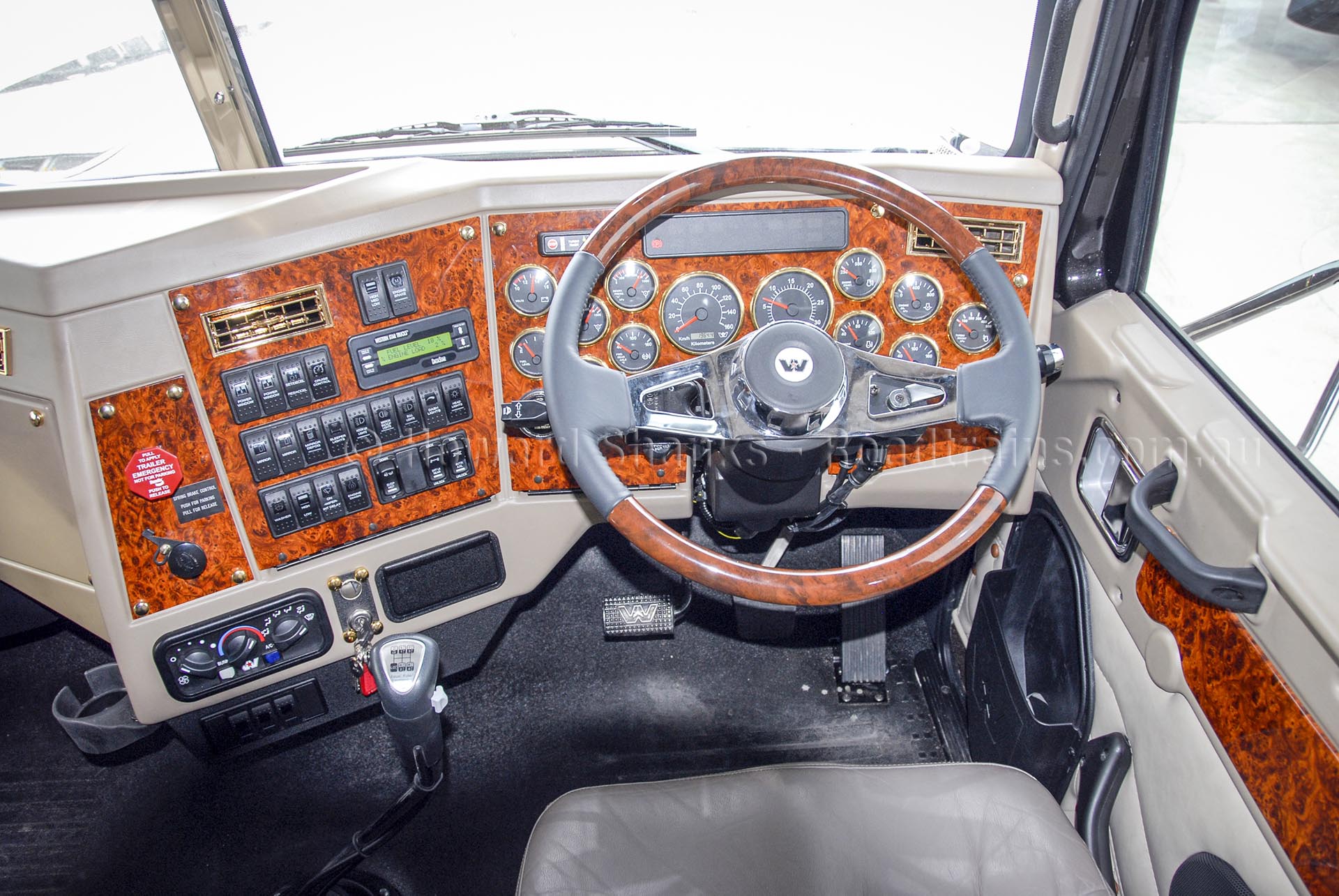 The second key member of the custom build team and man responsible for the fine artwork was award winning designer Daryl Maud of TransArt. Transart is a custom paint, airburshing and signwriting business that was established in Bendigo, Victoria in 1997 by proprietor Darryl Maud. Darryl has over 20 years experience in the customised spray-painting industry. The Transart custom paint team also consists of Haiden Oswald and John Latimer who each have five years experience and Trevor Monte who has 22 years experience.

“We almost started up with a Star-trek theme,” Daryl Maud began. “Leon and I were tossing ideas around that went with stars and the constellation before we conceived the Gangstar theme. The criterion set by Western Star was that this truck had to be a showstopper, famous so to speak. There is a certain mystic that surrounds the myth and legends of the gangsters which is why we went down that road.”

Once the theme had been finalized the truck was virtually stripped back to a bare chassis. The chassis was then plated, smoothed and detailed and everything refitted with custom made mounts and fitting.

Starting at the rear, you find the solid rear ‘W’ bumper with star tail-lights then the pole-less rear guards that blends with the smooth look walk-plate. The exhaust tips are chrome 7-inch with Thorpe’s own cab extensions. Meantime mirror LEDs line the tank trims and Texas bumper. Extra traditional style bullet cab lights have been fitted along the roof. Finally up in the front there is a cool custom “old-school” shutter style grill.

The interior of the cabin didn’t miss out either, for starters the driver and rider’s seats are National 2000 Premium seats finished in beige leather. The dash accents are premium Burl Elm woodgrain with gold bezel gauges complete with the leather and wood steering wheel. Thorpe’s also added diamond stud roof trims with contrasting buttons and gold dashboard accents including air vent outlets.

Incidentally, did we mention the train horn hidden under the bunk? 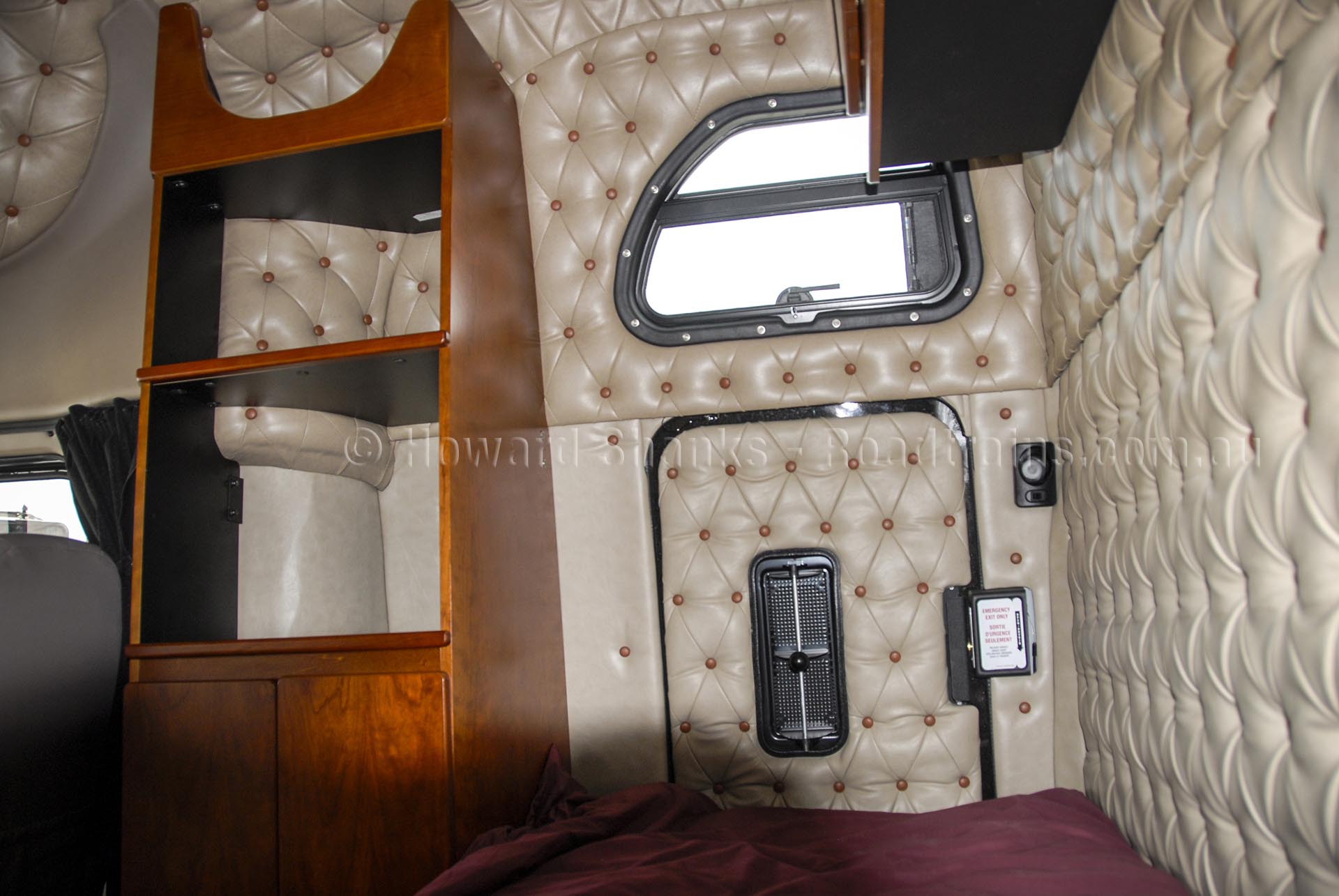 The award wining paintwork requires more than a mere glance to fully appreciate all the hidden details such as the inlayed stars along the chassis and guards. Much like the gangsters of the prohibition era whose stories have secret hidden tales, so to does the impressive artwork on this Western Star.

For Daryl and Leon there was only one choice to headline this rig. Al Capone! He is after all America’s best-known gangster and considered the single greatest symbol of the collapse of law and order in the United States during the 1920s Prohibition era.

The Capone story goes that at a young age Capone learned from Johnny Torrio, the importance of leading an outwardly respectable life. To segregate his career from his home life, as if maintaining a peaceful, conventional domestic setting somehow excused or legitimised the venality of working in the rackets.

With this in mind, Daryl chose to keep the sides of “The Gangstar” clean to reflect the outward respectable life Capone led. Meanwhile the top of the bonnet formed a perfect canvas for the magnificent airbrushed image of Capone himself, segregated from the main lines of the truck… subtle and clever.

The back of the bunk also formed another large canvas for Daryl and his team to work their magic. This scene depicts the legendary American Prohibition Agent, Eliot Ness, and his team dubbed “The Untouchables” who were responsible for bringing down Capone and his gang.

The end result is this stunning black Western Star delivered more than its creators set out too. Firstly it has taken out many sought after “Truck of the Show” awards. Secondly it got operators talking and excited again and they still talk about it to this day. More importantly it got many operators looking more closely at Western Star’s products, and judging by their increase in market share at the time, the gamble with “The Gangstar” well and truly paid off. 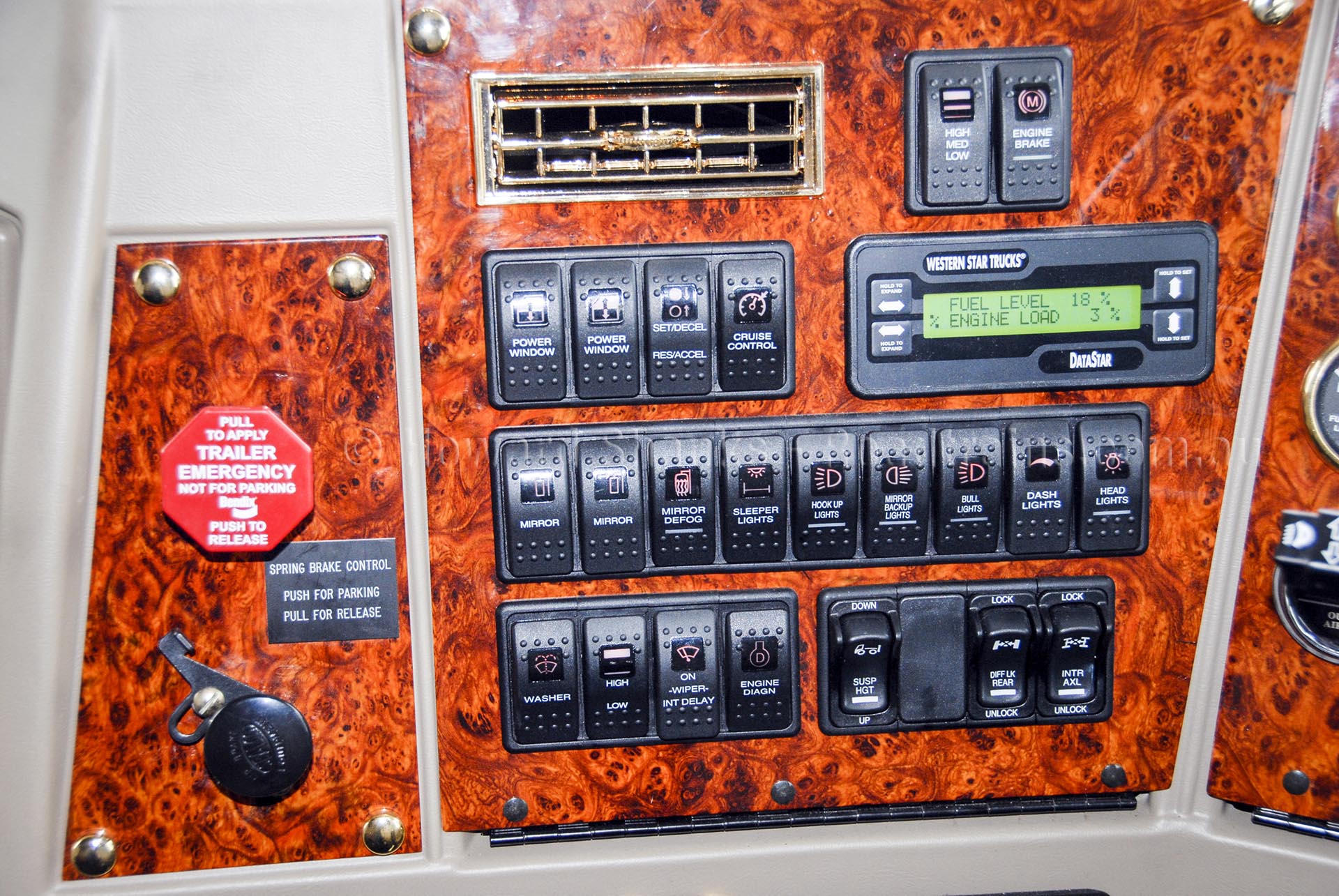