At the coal face to review the heavy haulage custom built Kenworth C510 in action. 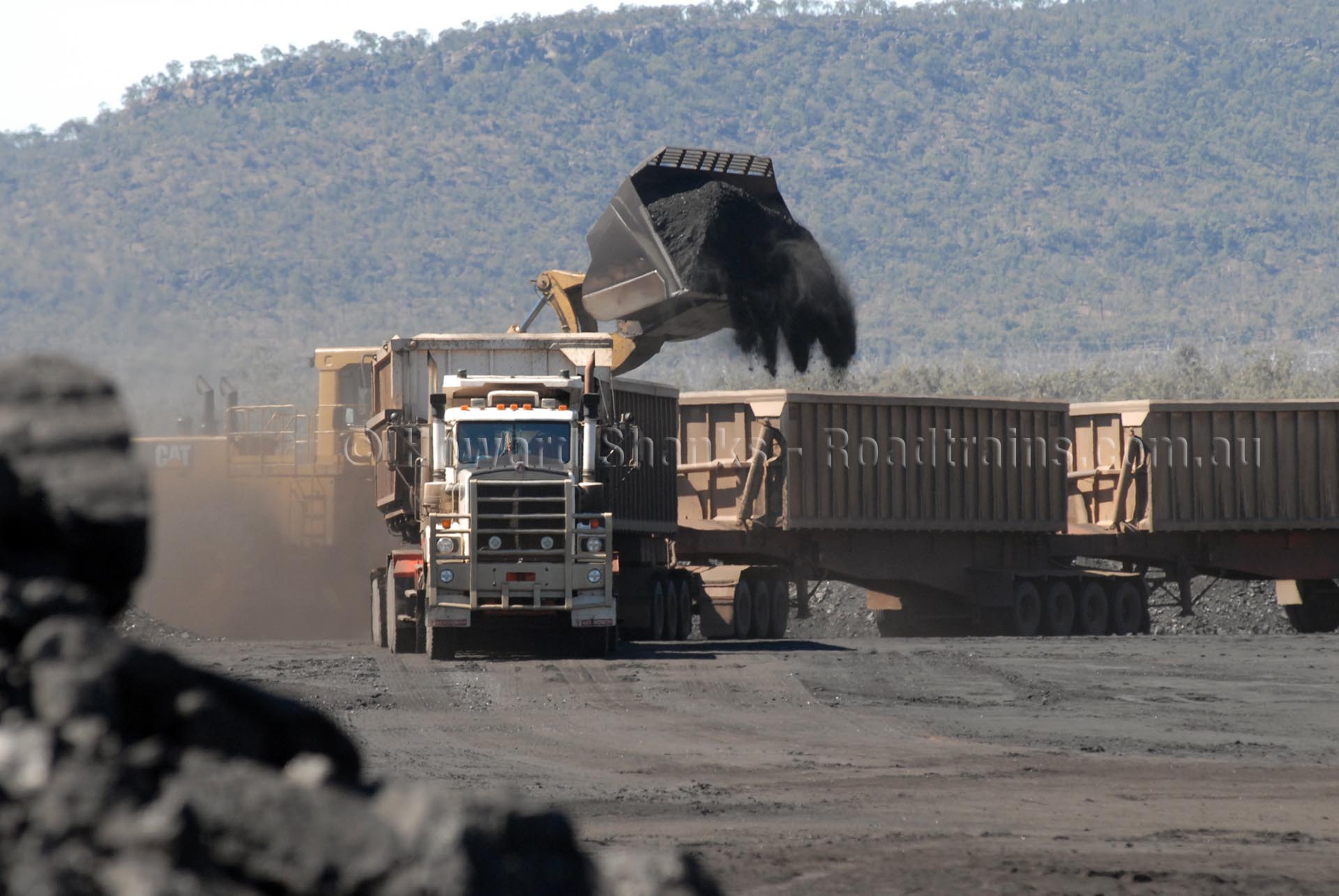 Kenworth C510 being loaded with coal at Burton Downs coal mine.

Like most coal mines in the north of the country it is hot, damn hot, and dusty. The work is hard and loads heavy, heavy enough to test any man’s metal or machine’s for that matter, in other words it is what truck makers call extreme duty.

Mining is big business, and at the moment it is real big business all over the world and has been for some time. Not only is there a big shortage of man power, there is also a big shortage of mining machines and none more so than a scarcity of tyres these machines use. To compound the problem haulage leads (that’s the distance from the coal pit to the processing plant) are forever increasing. On top of that too, the massive dedicated heavy duty dumpers are only efficient on short leads, up to 20 kilometres and even then it is pushing their limits, not to mention construction and maintenance of their haul roads is approximately double that for a conventional roadtrain.

How to get around this problem is one that has evolved over the past few years through much perseverance by operators, mining companies and some inventive Australian trucking manufactures. 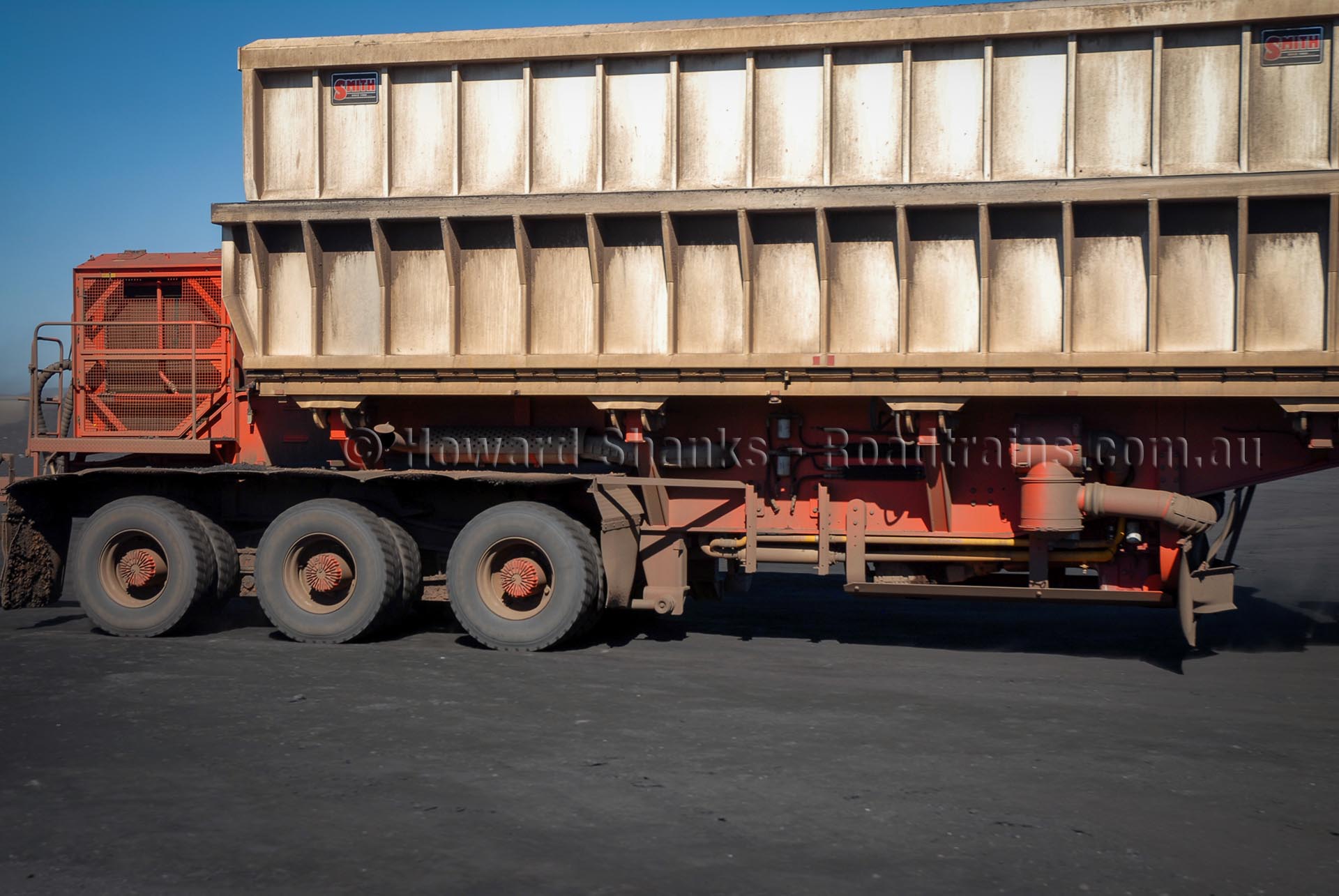 The Kenworth C510 gets a little help from the power trailer

The concept is simple enough, get the biggest toughest Kenworth truck and connect it to a string of trailers and load them up with say around 300 tonne of coal. There is the age old Australian adage “That’ll work!” And, while it sounds okay in theory a hell`va lot of design work went into getting the concept to fruition.

Today many mining operations, including gold and mineral ore operations are utilising Kenworth’s C510 coupled to power-trailer sets and they have quickly gained an enviable reputation for reliability, productivity and economy. That is vitally important in the mining game where production costs are measured in cents per grams of saleable product.

Kenworth set a new benchmark in ‘extreme duty’ workhorses with the release of the C510 some years back and since then the evolution of this model now includes a twin steer variant with options for on and off-highway applications.

Kenworth’s Chief Engineer, Gary Hartley, says the C510s provide the customers with enhanced durability compared to other models as well as a new level of flexibility, allowing fleets to use higher GCM trucks when and where they are needed. 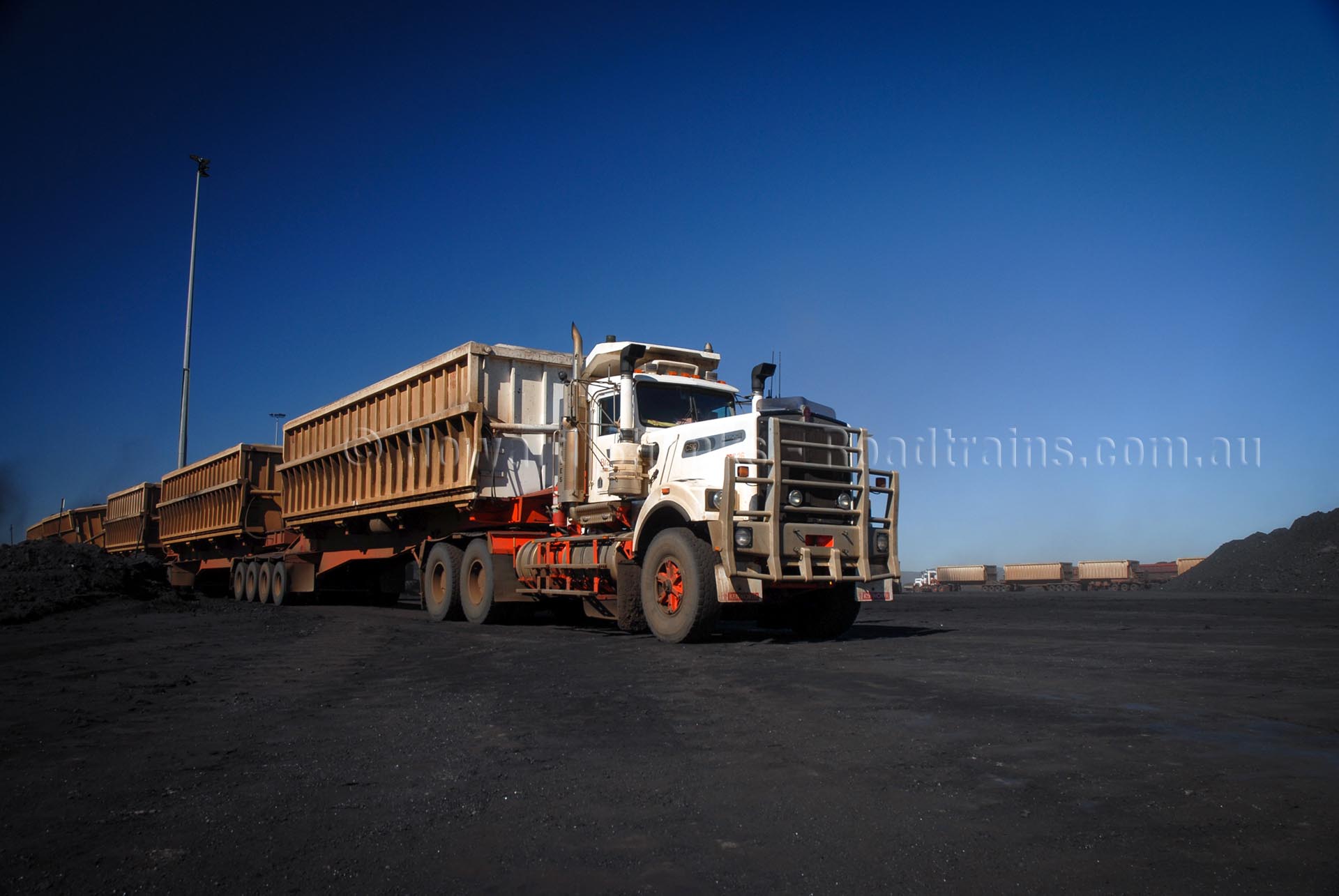 “These days, with just-in-time processes and tight schedules especially in mining applications, operators literally cannot afford to operate trucks that are unreliable or not up to the extreme-duty tasks. This is where the C510 will shine. It has been built without compromises on productivity, reliability or longevity.”

At the heart of the C510 is the new Cummins engine. Gary Hartley says it has passed rigorous ‘real world’ testing, proving its ability to deliver improved engine performance and life while operating in the harshest environments.

“One of our customers has been putting the QSK19 through its paces in Northern Territory’s Tanami Desert, hauling gold-bearing ore in 400-tonne, six-trailer road trains with powered trailer. Despite being continually under heavy load, there have been no overheating problems or performance issues They haven’t missed a beat – which is just what extreme-duty operators need and get with the C510,” Mr Hartley added.

Like many coal mines in central Queensland, the Burton Downs mine operate seven of these Kenworth C510s coupled to the five trailer power-trailer sets. They carry a massive 300 tonne payload and have a gross combination mass around the 450 tonne mark and travel at 75 kph

These Kenworth C510s at Burton Downs Mine are specifically designed for off-highway use and rated up to 250 tonne. They’re powered by Cummins’ 19-litre QSK-19 engine which meets the European Euro 3 emission standards and complies with Australian on-highway emission requirements (ADR80). Designed primarily for high-end road train applications, the big-bore Cummins engine provides superior levels of durability and reliability than is currently available from smaller cubic capacity engines.

“We are very pleased with the operational experience to date that shows the engine’s life-to-overhaul exceeding 20,000 hours. That’s a significant improvement on smaller 14 to 16-litre engines which can begin to peter out at 6000 to 8000 hours, as engine load factors reach a critical point,” says Ross McDonald, general manager of truck engine business for Cummins South Pacific. 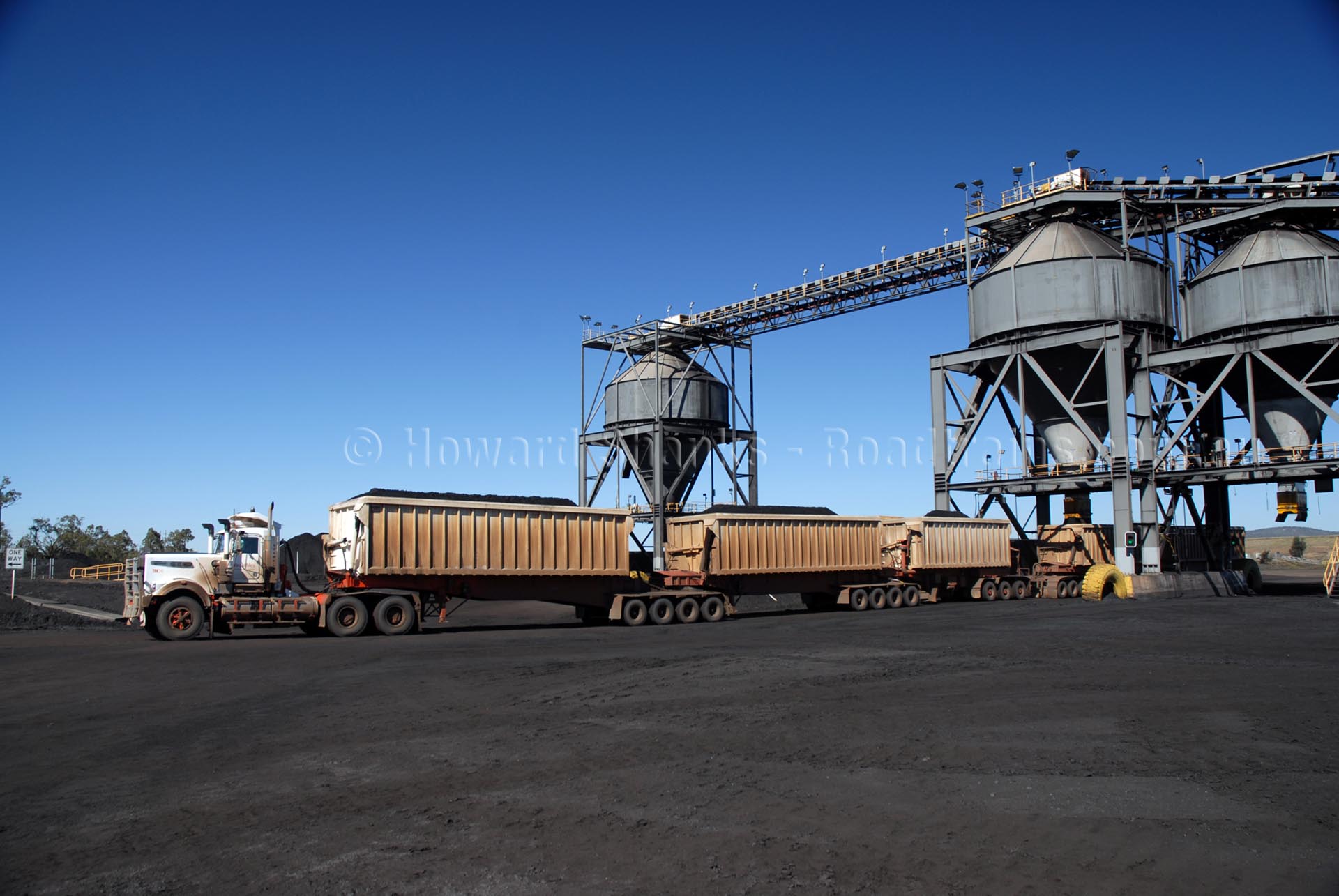 These C510s also feature twin steering boxes, which reduces the load on the hydraulic side of the power steering system in low speed steering situations.

Apart from fitting the enormous engine into the chassis, the most significant challenge for the engineering team was providing sufficient cooling for the power plant. The project involved a significant re-design of Kenworth’s regular model, The cooling package consists of a massive 1900 in2 radiator and a special charge air cooler, which meant a significant increase in frontal bonnet area to allow the vehicle to operate under ambient conditions in excess of 50˚C experienced in the expected operating terrain.

“We are the only Australian manufacturer that has the design capacity, technical expertise and resources to custom engineer trucks to meet the challenging needs of specialist niche markets, with high quality and quick turnaround,” Mr Rizzo said.

“No one else has that design and engineering capability, and that’s why truck operators who cannot afford to compromise, choose Kenworth,” he added. 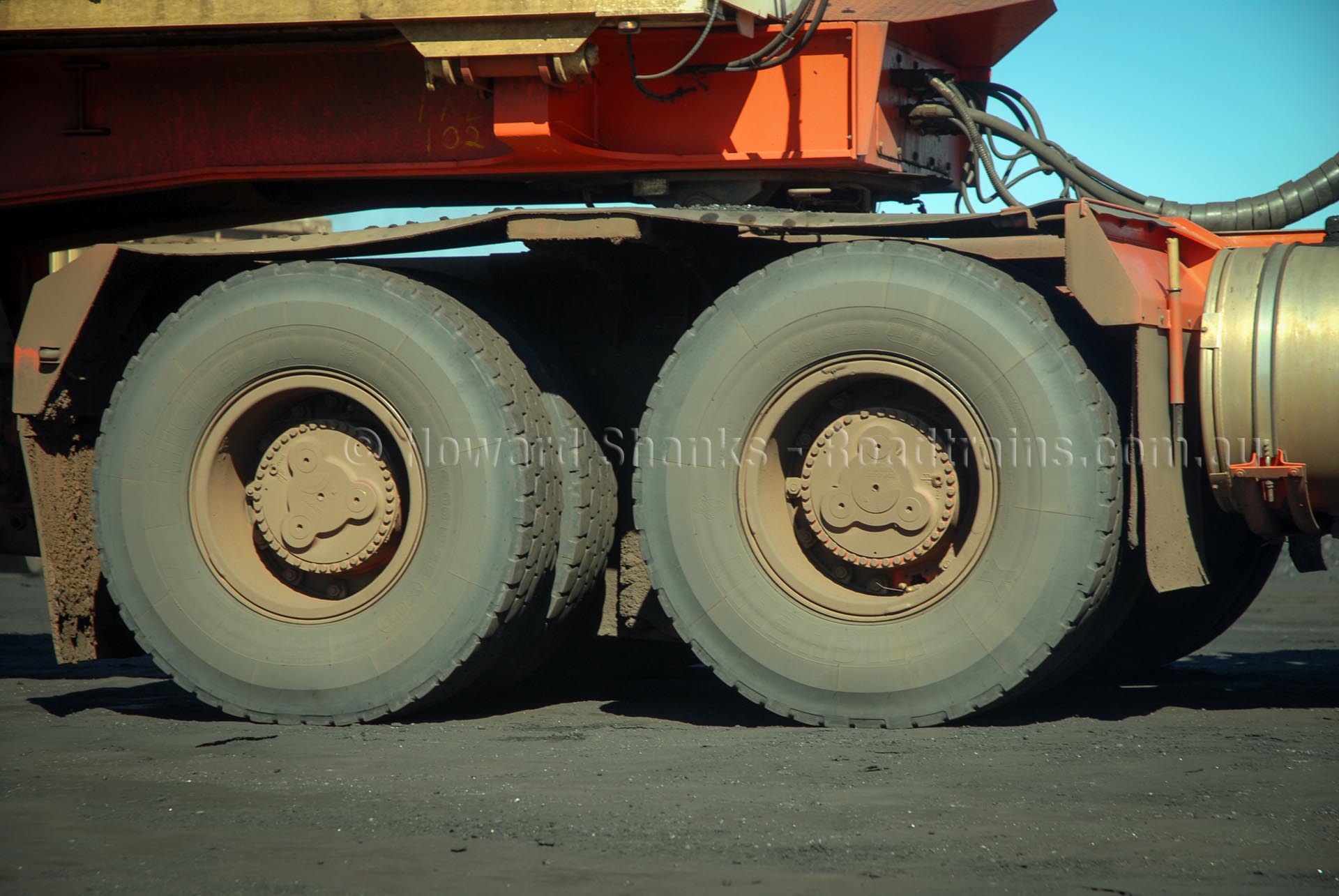 Meantime back to that tyre shortage we mentioned earlier. The Kenworth C510 is shod with 385/95-R25 tyres fitted on ten-inch rims which are essentially a mining tyre. However, the trailers use standard on-highway 295/80R 22.5 tubeless tyres which are not only in vast supply but considerably cheaper to purchase.

The trailers are manufactured by Smith Trailers in Gympie, who specialise in the heavy duty mining applications. With the exception of the power trailer unit all the trailers run on heavy-duty 3.2 meter wide BPW axles.

These power trailer units have a Smith built body on the power-trans chassis (they’re the company who built the power trailer unit) and they’re fitted with either Cummins ISX or Signature engines rated at 450 and 500 horsepower. They are coupled to an Allison automatic transmission and tri-drive SISU hub reduction axles. 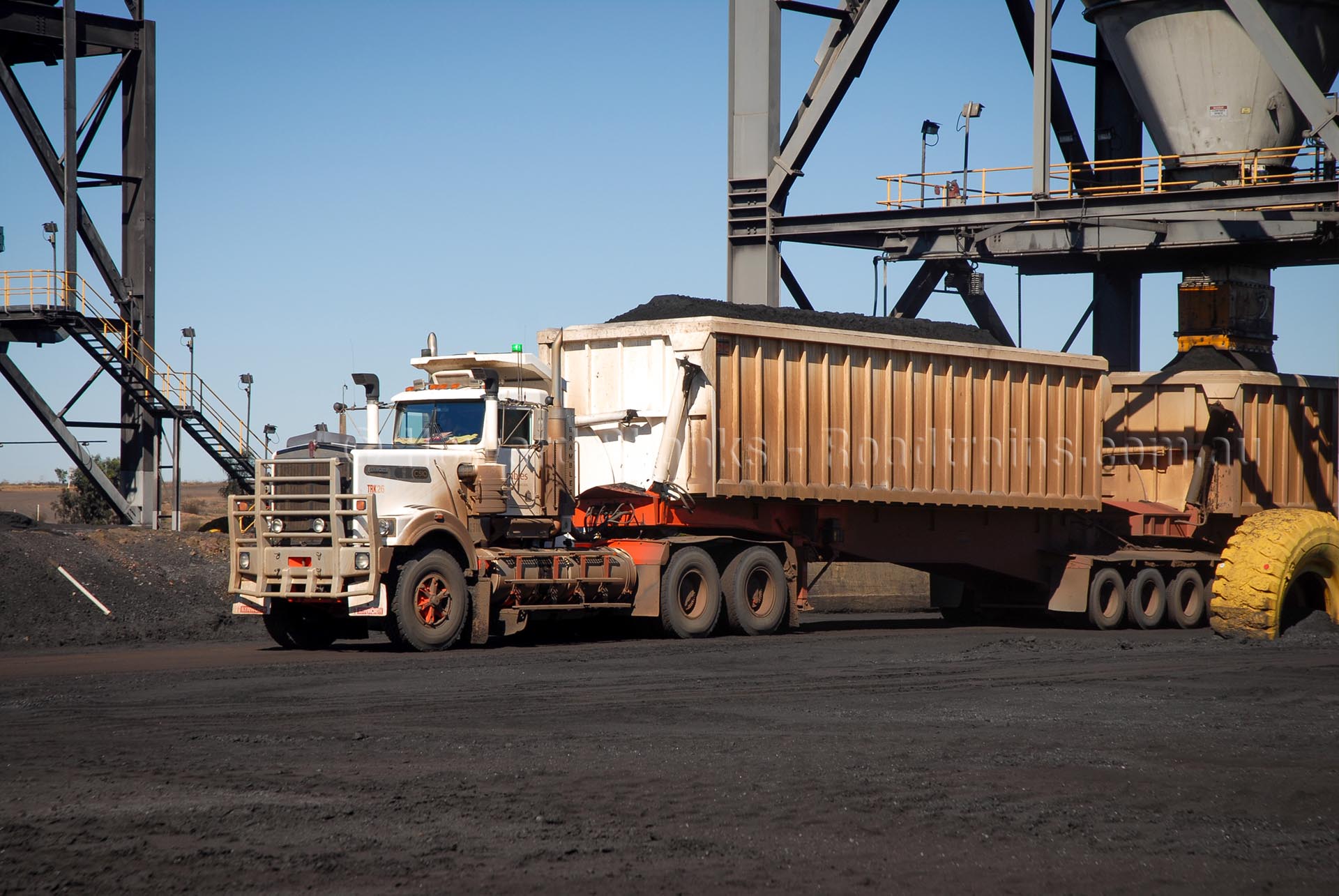 The control of these trailers is via both a cab mounted hand throttle and married to the accelerator pedal. The advantage of this for instance is when the unit is climbing a hill the trailer can be set at full throttle and when the driver changes gear in the Kenworth C510 there is minimal road speed loss as the trailer is still pushing the unit.

The power-trailers have a rating of 200 tonne which when added to the rating of the Kenworth C510’s 250 tonne give a rough combined rating of 450 tonne.

An impressive sight is to see 300 tonne of processed coal loaded into these units in three minutes as the slowly roll under the massive storage towers. This processed coal is taken to the mine’s rail-siding which is then loaded for the final leg to the port for export. On the return run the units bring back raw coal ore from the pits, which is loaded by massive Cat wheel loaders a couple of scoops per trailer and in under ten minutes the unit is fully loaded again.

As the big Cummins engines roared and the C510 with its 300 tonne payload of raw coal slowly roll out of the pit it signalled the end of our tour at Burton Downs Coal mine. 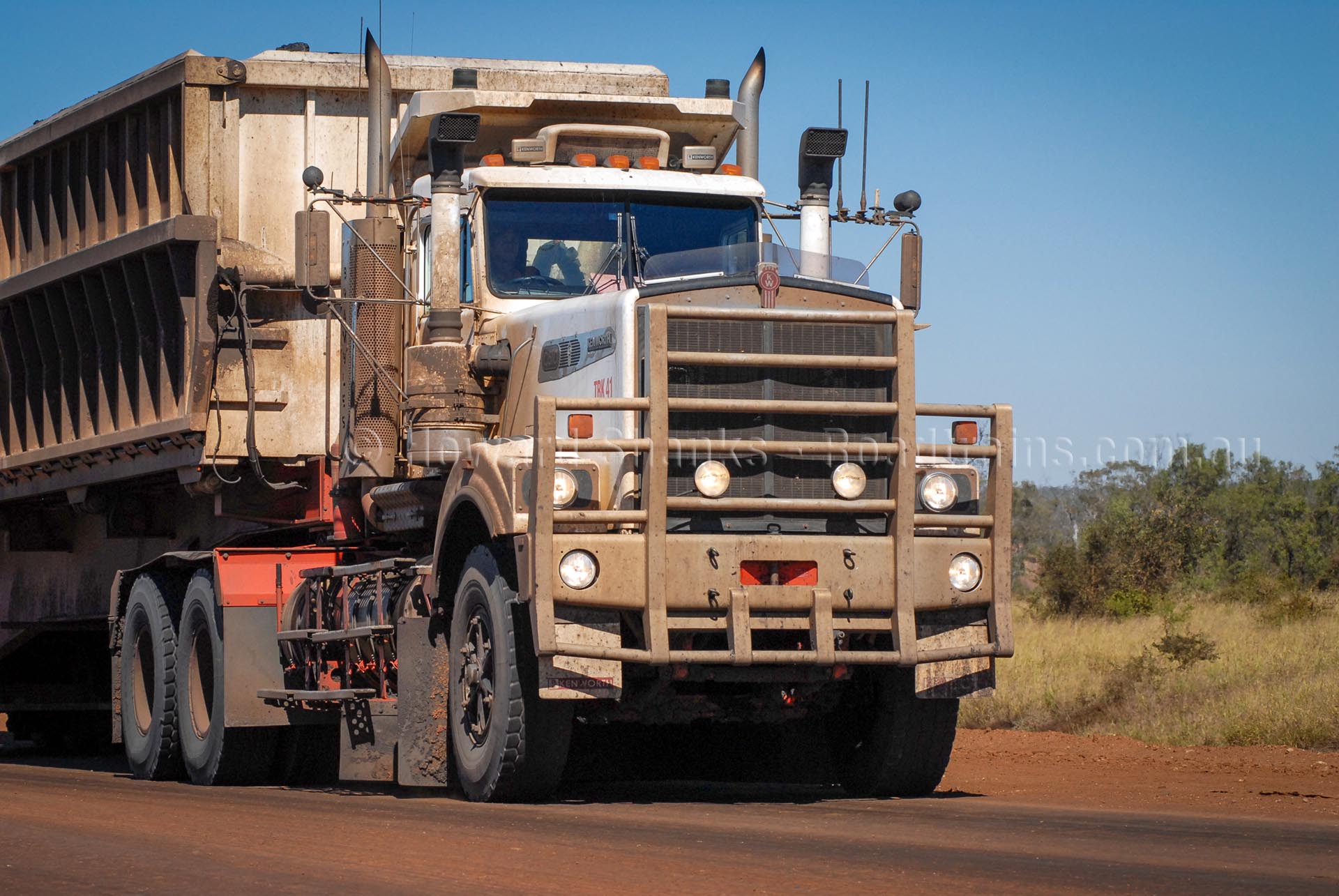