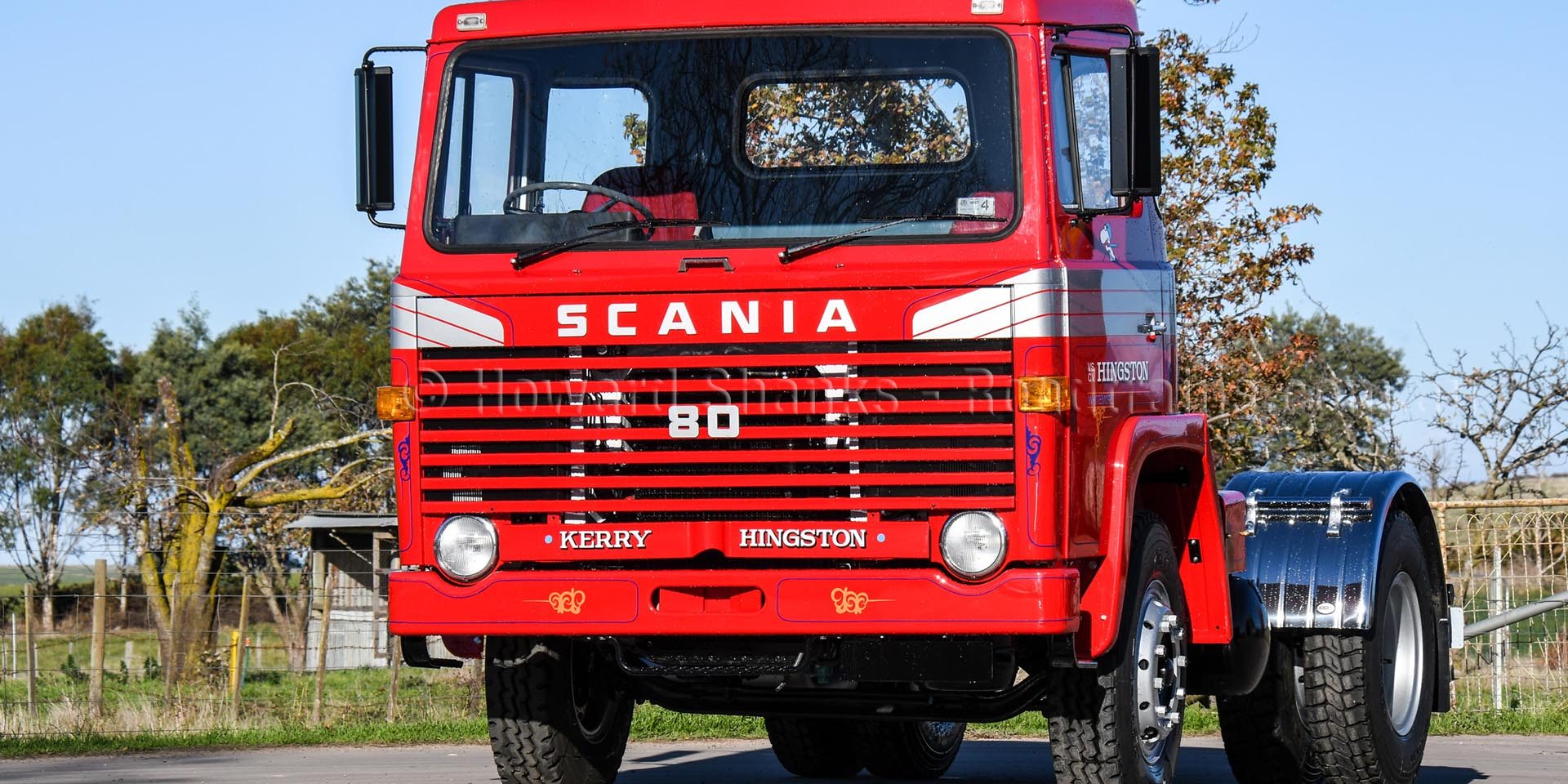 The Scania LB80 4×2 introduced a new way of trucking with greater efficiencies, reliability and comfort in the early seventies. Four decades ago, Tasmanian based livestock transport operator Kerry Hingston purchased a 1973 LB80 that formed the back bone of his operation and it toiled reliably in his business for over a quarter of century. Today, after a meticulous restoration that same truck is still the pride of the fleet. 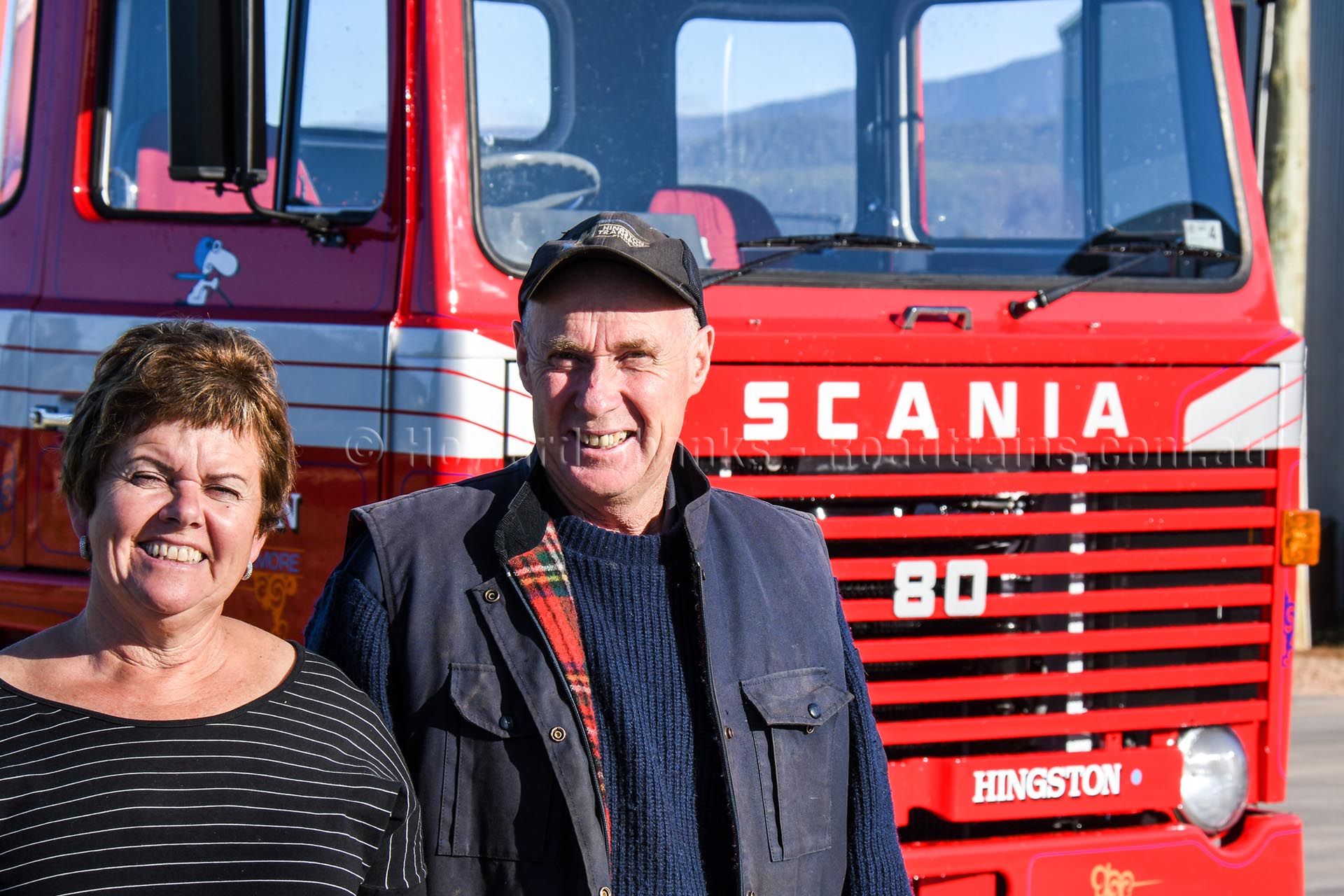 Kerry Hingston was working on an old tractor in his workshop. He had just turned off the oxy acetylene torch and placed it on the bench. How are you? he asked with a smile then added “it a great day to take photos …

A few weeks before at Kerry’s sixtieth birthday his family had presented him with his original truck, a 1973 Scania LB80, that they had spent the past 12 months secretly restoring for the occasion.

Kerry and wife Louise’s two sons, Marcus and Nicholas help run their livestock and milk haulage business in northern Tasmania. The two boys, together with their staff and key suppliers they had painstaking dismantled the old Scania that was as much a founding member of the Hingston Livestock business as it’s owners, and transformed it back to its former glory.

Although according to Kerry’s wife, Lousie, keeping the restoration project a secret from Kerry at times did present a few challenges. “The boys dismantled the truck last year while Kerry and I were on holidays,” Louise recalled. “However, after we returned from holidays, every couple of weeks Kerry would ask where the old truck was and the boys came up with all sorts of excuses that revolved around needing more room in the workshop. 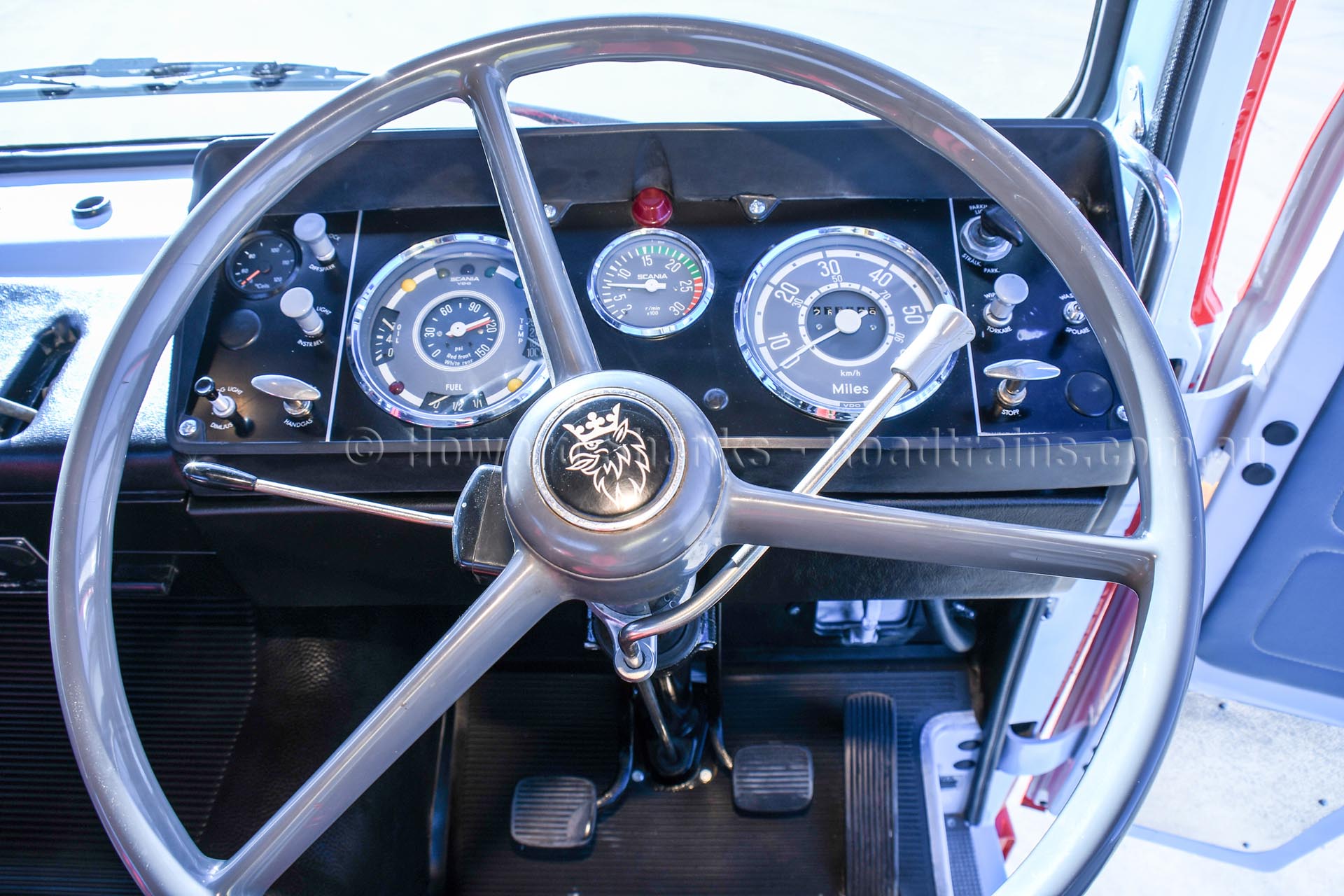 Although Kerry nearly caught us one time, while he was out running a few errands he mentioned he was going to drop in on the painter who paints our trucks because he thought he might know where the old truck was. I quickly rang the boys to tell them Kerry was on the way to the painters and between them all they invented a story.”

“When Kerry finally arrived at the painters, they’d managed to cover the cabin up which was there being painted,” Louise said. “Kerry asked the painter if he’d seen or heard of the old truck’s whereabouts and the painter replied that thought he’d seen one like it advertised on ‘Gumtree’ a week or so before. Kerry wasn’t happy and all the boys could do was laugh. Nevertheless, in the end we managed to keep the secret and he was really surprised and a little emotional when we finally presented it to him.” 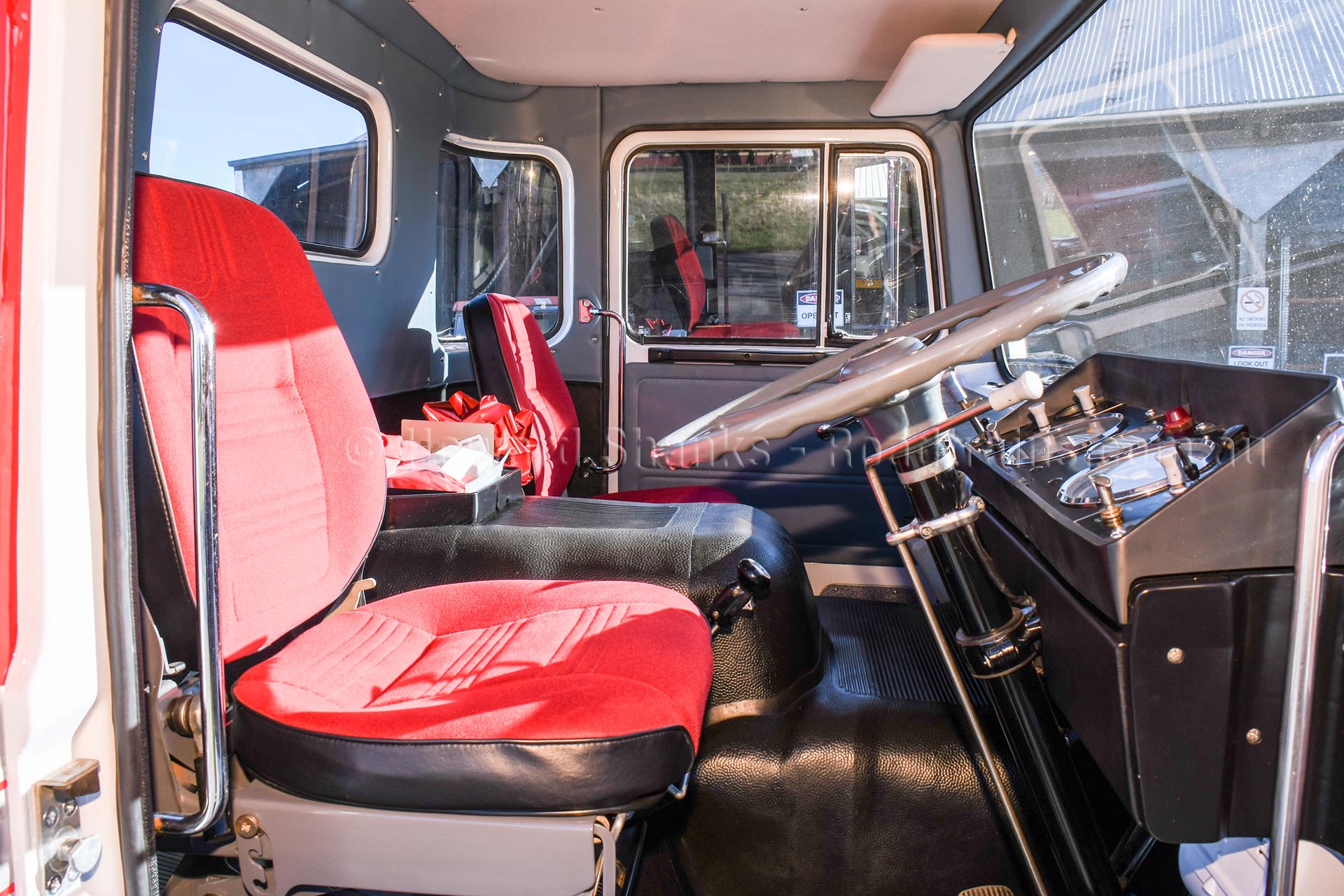 Wind the clock back to 1975, a young Kerry Hingston had made one of the biggest investments in his life, purchasing a second hand 1973 Scania LB80 with 29325 miles on the clock, to tow a single deck cattle trailer that converted into a two-deck sheep crate.

For the young 17-year-old that second hand Scania represented a huge investment, and while there was no missing the smile on the young man’s face as he eased out the clutch and pointed his newly acquired LB80 Scania down the narrow road to collect his first load of cattle. However, deep inside he suppressed his trepidation about the risk of the investment he’d made in an enterprise with a precarious grip on certainty.

In the early seventies, Australian trucking was predominantly made up of Australian built petrol-powered Internationals, Dodges, and the lethargic imported Leyland’s. 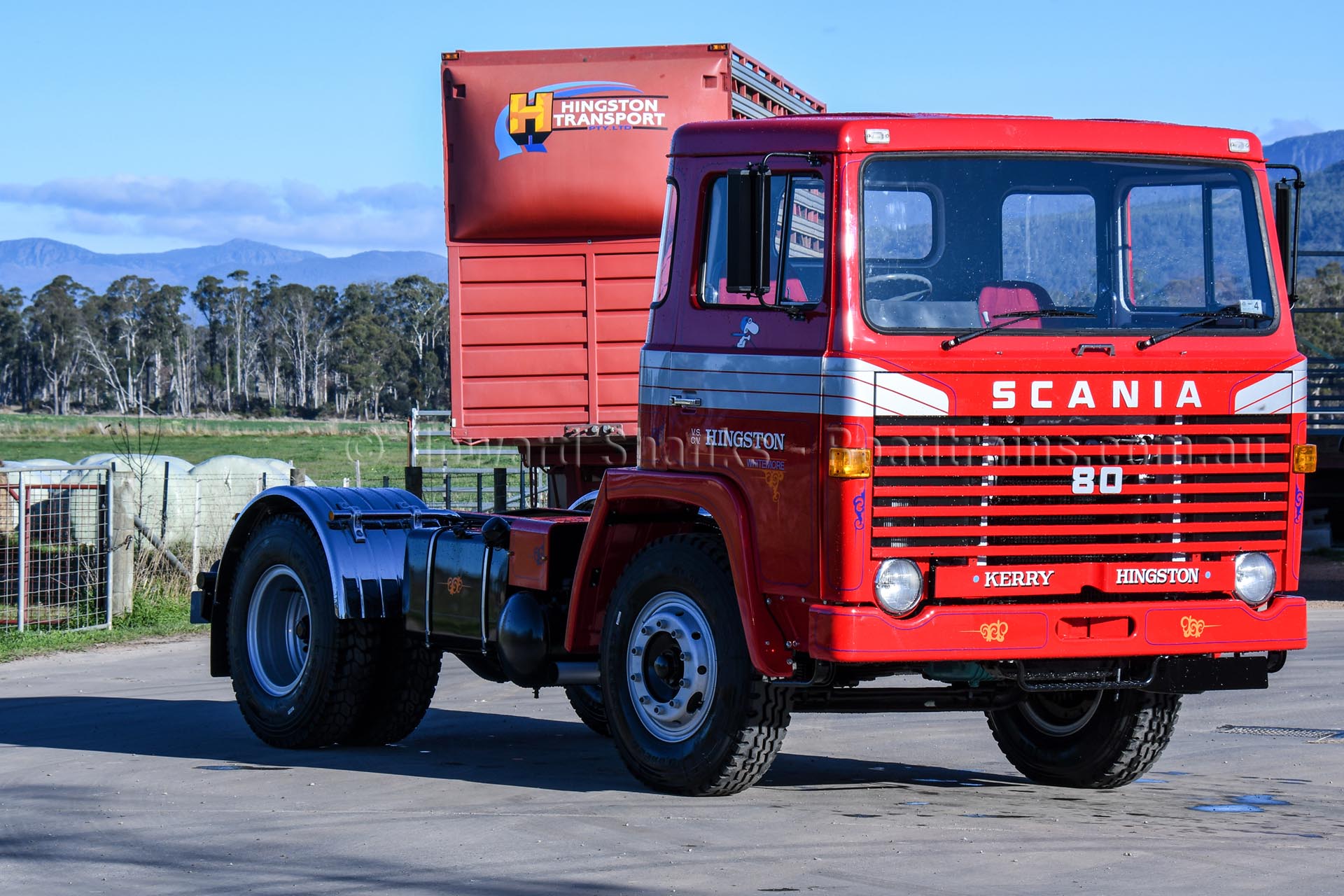 “By the early seventies the 1418 Mercedes-Benz was gaining popularity and I’ve got to admit I did look at them, after all, price wise there was no difference compared to the Scania LB80,” Kerry recalled. “But the features of Scania LB80 really set this truck in a class of its own. At the time, it was a very advanced truck. The LB80 had a little more power than the Benz too, it had 210 horsepower 30HP more than the Benz. It had a full synchromesh transmission and hydraulic tilting cabin which made it a much easier vehicle to service.”

There is no lack of theories about why so many imported heavy trucks from Europe were bought by local operators in those early days of Australian trucking. Because today many truck historians still argue that the Scania LB80 and LB110 did more to advance truck driving and operating standards than any other type before or since. 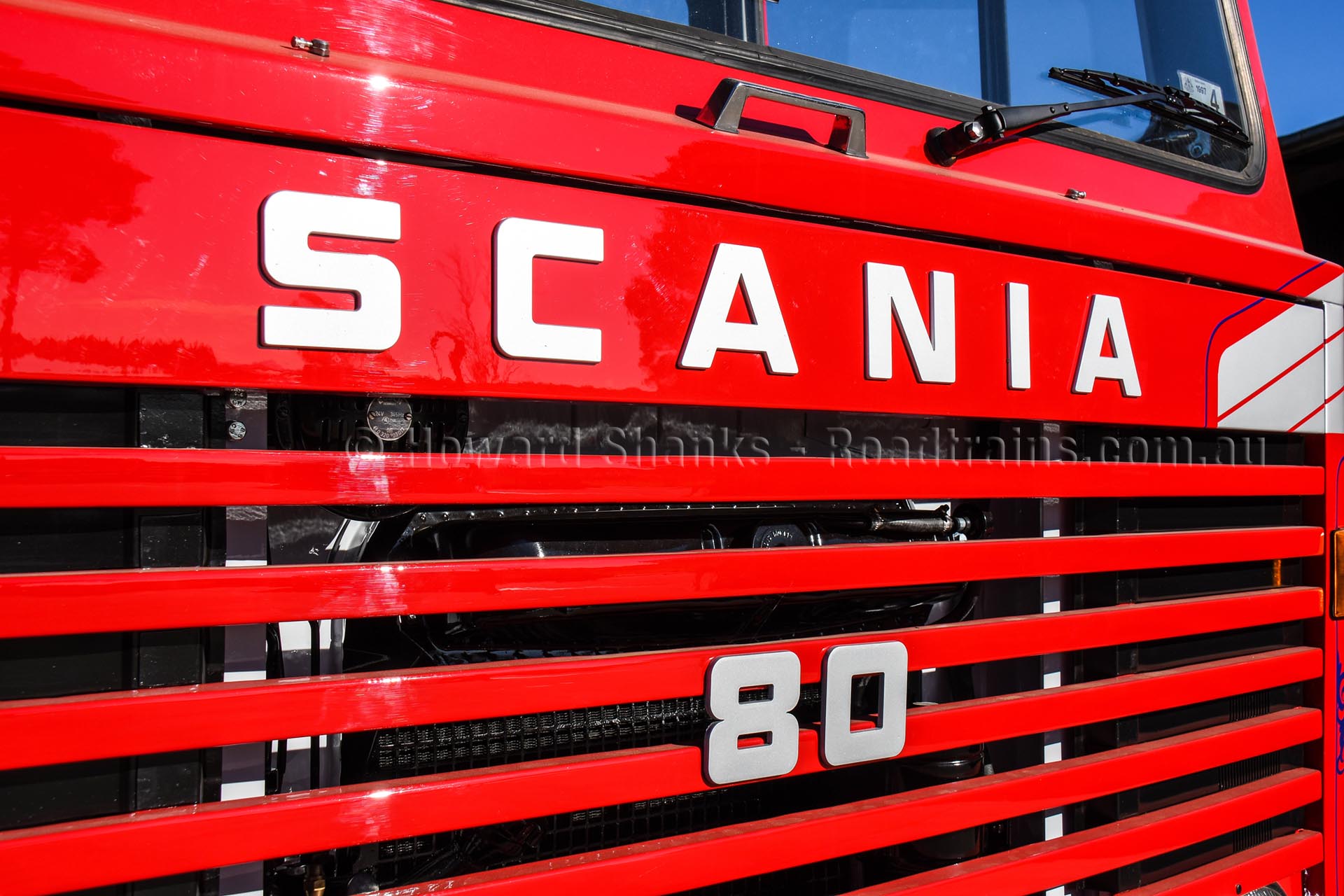 Nevertheless, Kerry Hingston is one man who can shed some light on the why?

It came as no big surprise when he answered with a very strong confirmation that a search for reliability and good spares back-up was the main motivation in the first place – and an undisputed opinion his choice had been justified in this respect over the years, along with a conviction he would continue to buy the same in future.

“Back then in the formative years of our business Laurie Kelly was the Scania dealer in Tasmania,” Kerry recalled. “He did a terrific job, he really backed the Scania product and had a good range of spare parts in stock. Having that good back up service really makes a difference when it comes delivering reliable service to our customers.” 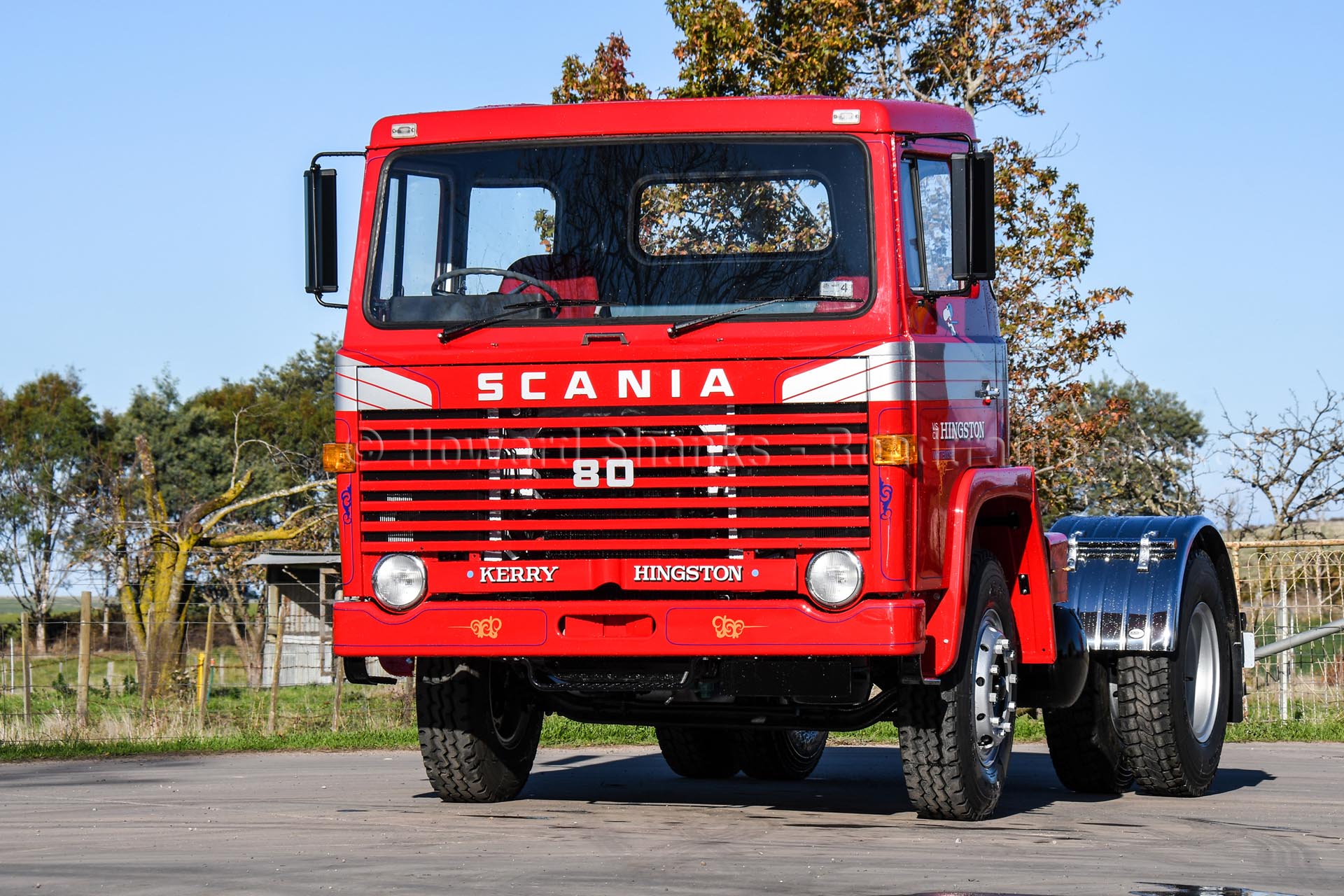 “When I purchased the LB80 Scania, reliability was one of the key features I was looking for,” Kerry explained. “Over the years it proved to be a very reliable truck, in fact we kept it registered up until 1997, so 24 years’ service is a pretty good run by anyone’s measure.”

“It had a top speed of 60 miles per hour,” Kerry recalled. “And you knew you were doing it too,” He added with a smile. “In its life, its clocked over 1,236,000 miles and had engine rebuilt three times.

The original power setting of the DS8 turbocharged engine was 210HP, however Kerry had the power bumped up to 230HP along the way. The transmission is the original Scania GS760 10-speed synchromesh splitter box with a first gear ratio of 9.74:1. The single reduction spiral bevel rear axle had the 4.86:1 ratio option.

The braking system on the LB80 was advanced for time with a dual-circuit air-pressure system, separate circuits to the front and rear axles, and the fitment of spring brakes at both axles to meet secondary and parking brake requirements. Brake drum diameters are 41.27 cm (16.25-inch) diameter with 8.9cm (3.5-inch). shoes at the front axle and 7.8 cm (7-inch). at the rear.

For truck those enthusiasts who appreciate the nomenclature of truck models, the ‘L’ indicated Lastbil which indicated a truck, ‘B’ indicated Bulldog which indicated it was cab-over-engine (COE). The ‘8’ indicated the cylinder displacement of 8-litres and ‘0’ was the first model in the series. 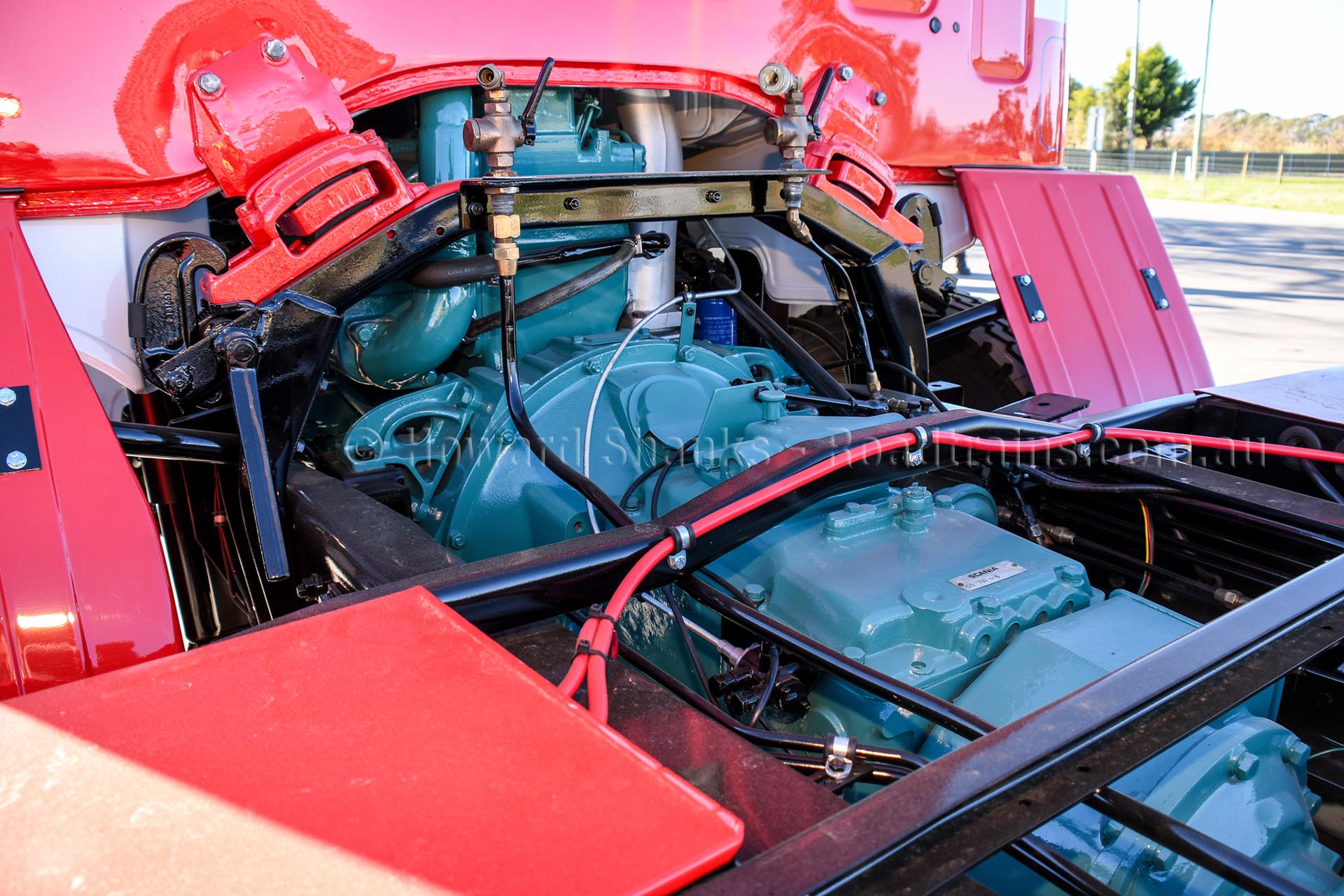 “When the boys were doing the restoration, I was adamant that they did not put a turntable back on the old Scania otherwise Kerry would start using it for work again,” Louise revealed. “I’d spent enough time travelling in that old truck, when we were courting, the only way I’d get to see him back then was to ride in the old Scania,” Louise added.

“It certainly was a very comfortable truck to ride in, in fact I’d often fall asleep in the cabin on the trips. When they were doing the signwriting for the restoration, Kevin Brown, from Spectrum Signs, one of Tasmania’s last remaining free hand sign writers, painted the little ‘Snoopy’ character on the passenger side with his eyes shut because I was well known for falling asleep in it. The picture on Kerry’s side has ‘Snoopy’ with his eyes open.”

In the early days Kerry found the fuel consumption of the Scania LB80 very favourable along with the reliability of the unit. It was factors like these which led Kerry to repeat the order for more Scania trucks as the company expanded and recently they took delivery of their 25th new Scania truck, a G480. 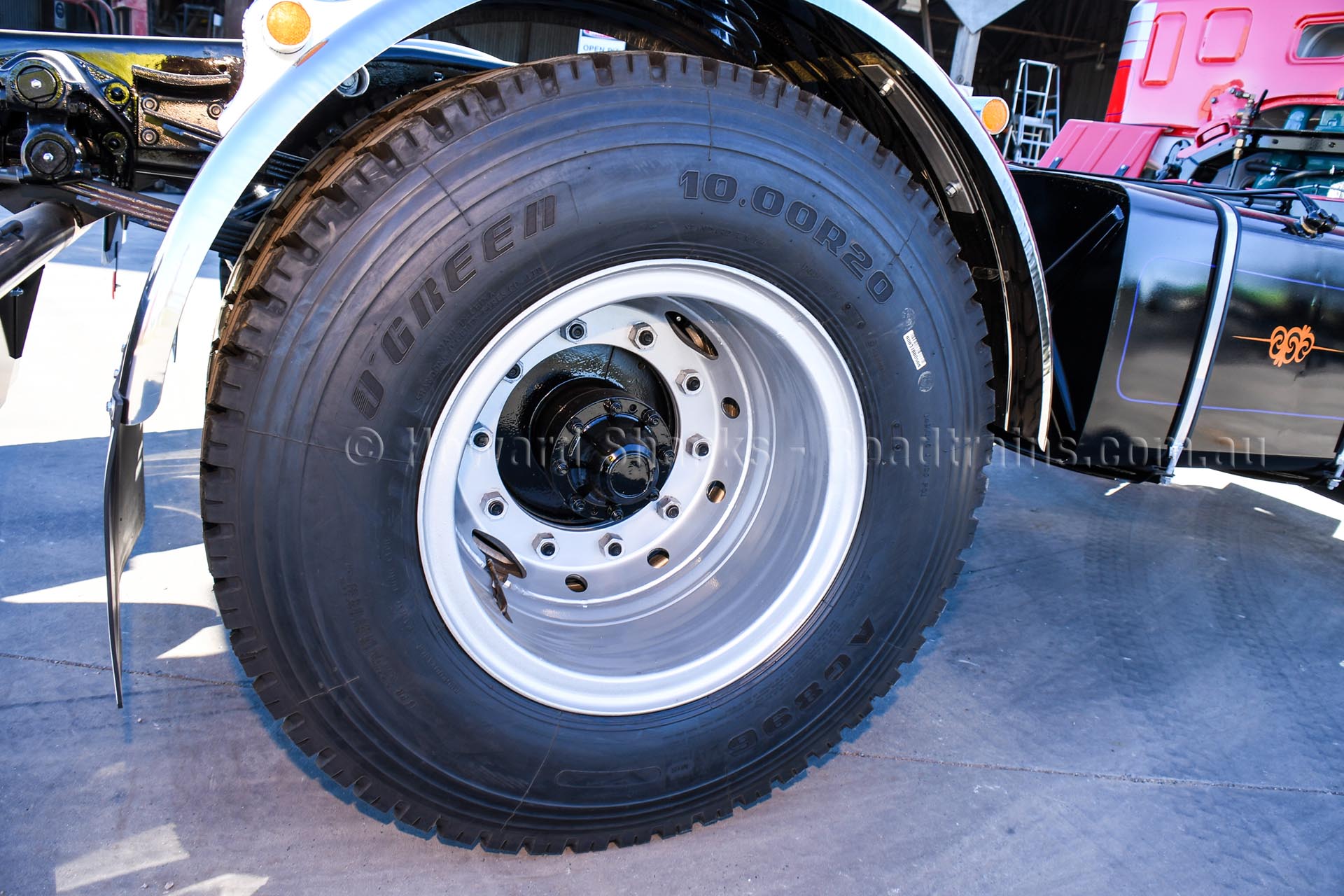 “I was really surprised when they drove the old LB80 in on the day,” Kerry said. “Even our daughter Katie surprised me by flying home from Canada for the occasion and never let anything slip about the truck. I’d always intended to restore the old LB80, but finding the time always proved a bit of a challenge. Everyone involved did a magnificent job on the restoration especially with all the detail, right down to the polished brass brake fittings, I certainly couldn’t have done such a magnificent job on my own. I did find out that my good friend Laurie Kelly, his son James and mate Ross did all the hard work on the restoration, so I’d really like to say a huge thanks to those guys for the terrific job they did.”

“Sure, I have some fond memories of this old truck,” Kerry added. “It was a damn robust, reliable machine that certainly made us a lot of money in its time.” 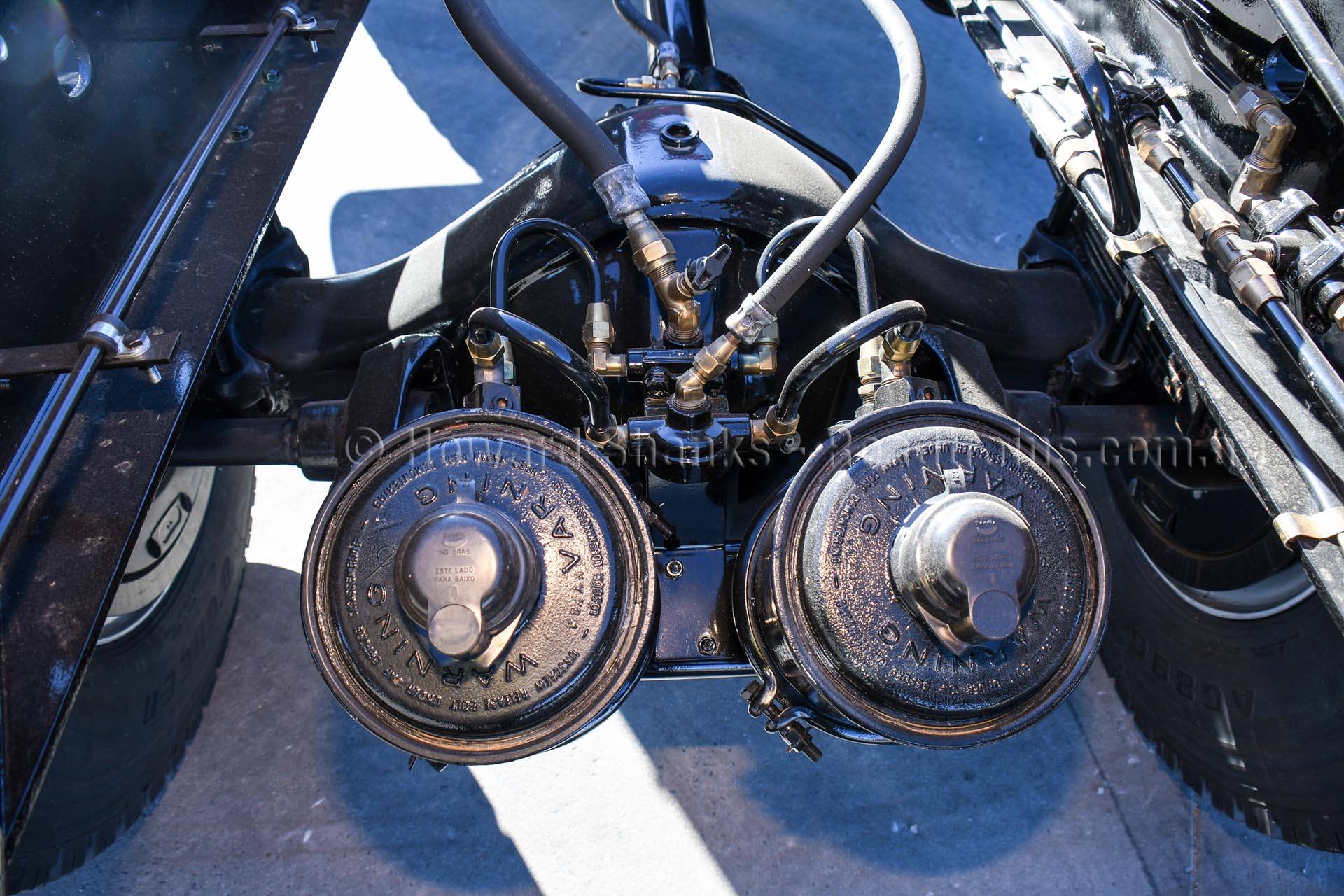