Our journey in the Vähälä Actros 2663 Road Train begins in the Oulu, Northern Finland, in the dead of winter, where temperatures plummet to minus 40°Celcius. Here winter presents both the trucks and their drivers with a particular challenge, short days, icy roads and poor visibility.

Finnish transport company Vähälä Group was founded in 1937 and has offered domestic land transport services in central and northern Finland as a partner of the DB Schenker network. This cooperation dates back to 1956. From October 2021, the company became an independent subsidiary of Schenker Oy in domestic land transport of DB Schenker in Finland. The company has 265 employees and is a pioneer in eco-friendly transportation using gas-powered trucks and electric vans, including long HCT trailers. 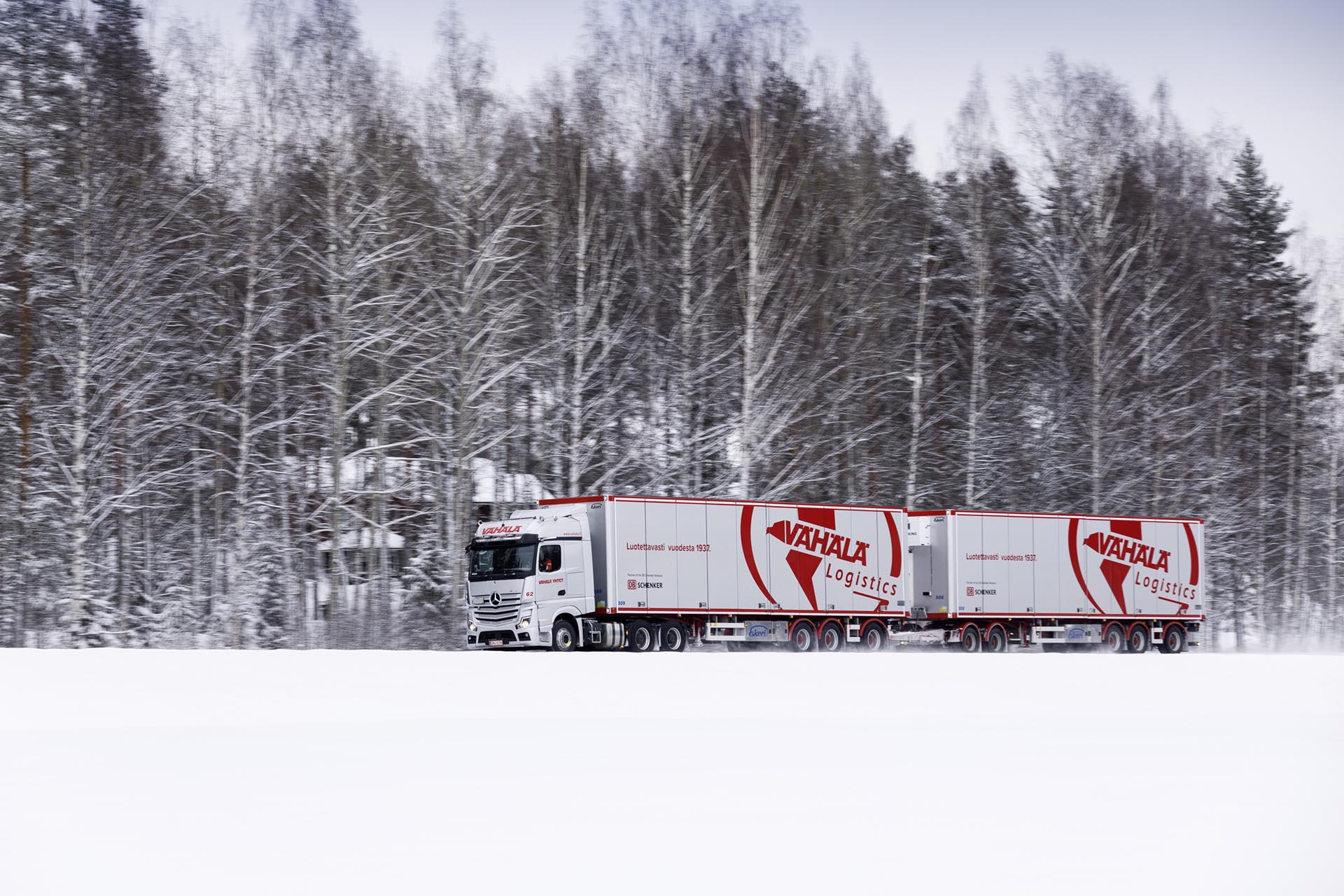 Vähälä Logistics can rely on the new Actros, even as temperatures reach minus 40 degrees.

Their current fleet consists of 65 trucks. They are putting their trust in the new high tech Actros models for their daily routines in the extreme conditions of Finland, which are unmatched across the rest of the continent. The Finnish winter has days that start with temperatures slightly above freezing, which will then reach minus 40 by the time drivers arrive at the northern provincial capital of Rovaniemi in the evening, having travelled a good 900 kilometres from the south of the country to get there.

“We’re delighted with the new Actros,” says Ville Vähälä, third generation at the helm of the family business. The 42-year old was one of the first customers in Europe to have used the vehicle as part of long-distance road testing. The vehicle has since become an integral part of the company fleet. The 2663 Actros operates on a multi-shift basis, with an annual mileage is an impressive 250,000 to 300,000 kilometres. 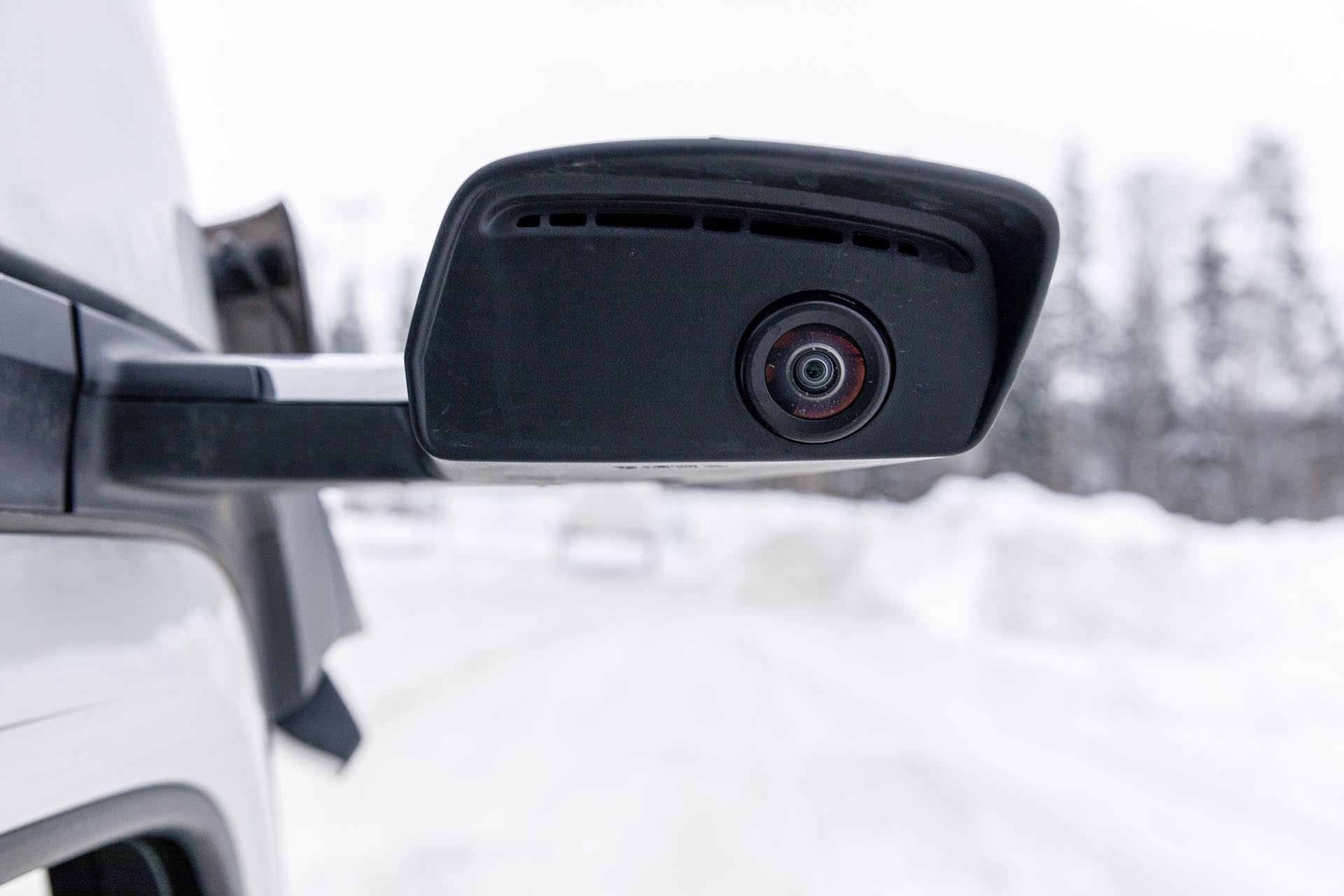 Clear view thanks to powerful camera and minimal soiling of the MirrorCam in the new Actros.

Vähälä uses the Actros 2663 as a “high-capacity truck” equivalent of an Australian Tyre-1 road train or A-Double. Trailer combinations like these, reaching up to 34.5 metres in length and weighing 76 tonnes in total, have only been permitted in Finland since early 2019. And the new Actros appear to have been perfectly designed for this role. Because Finnish law dictates that any towing vehicle with a train length of 28 metres or more must have a digital camera system – something the new Actros includes as standard with the MirrorCam.

The MirrorCam has replaced the primary and wide-angle mirrors on the outside of the truck with two compact, streamlined camera arms on the roof frame. The images captured are transmitted to displays on the A-pillars in the driver’s field of vision. The system thus assists when navigating bends, for example, whereby the image of the inner curve moves following the vehicle’s movement. The driver thus always has the end of the trailer in their sights. 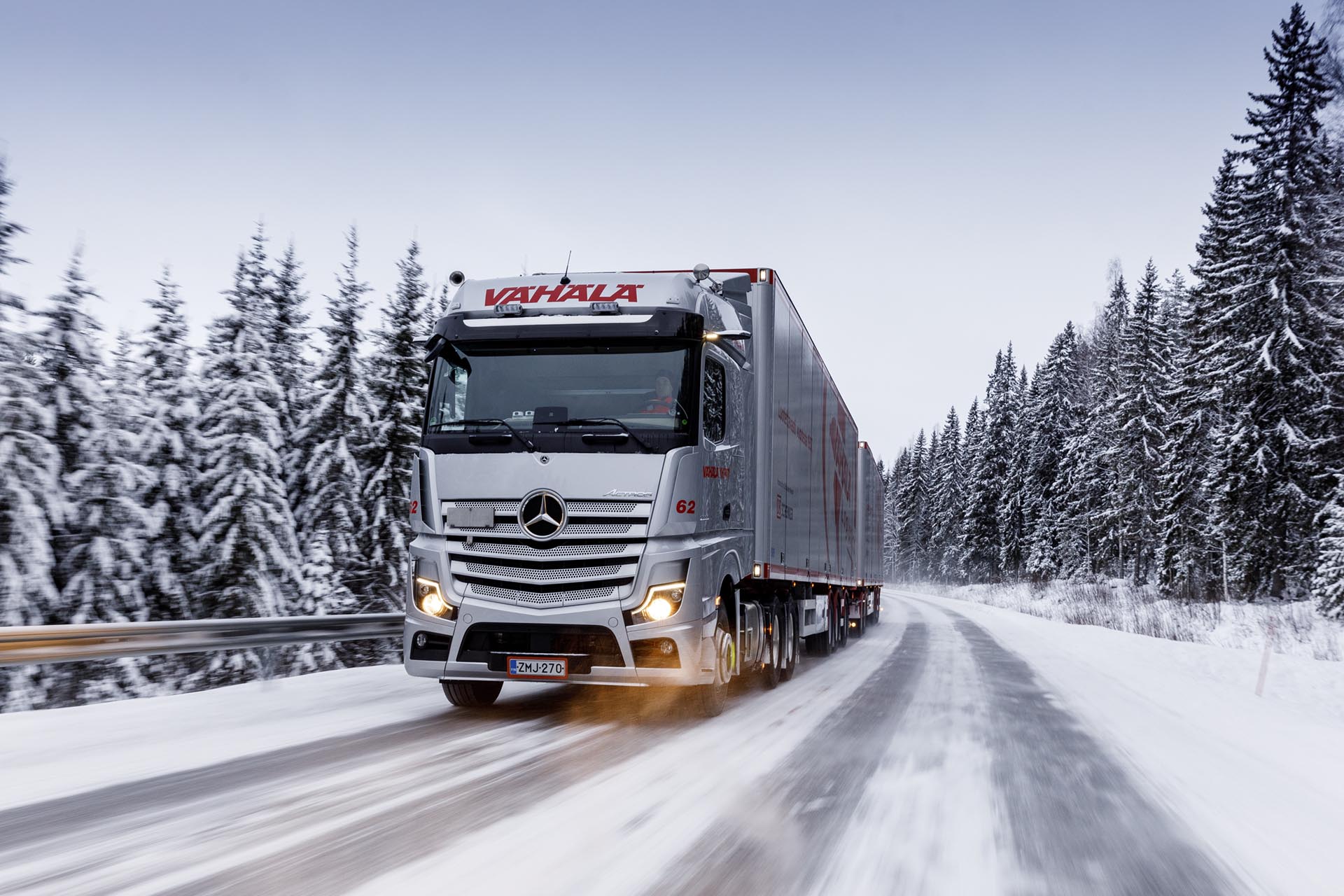 All truckers generally benefit from these features. However, those truckers looking to safely navigate the poor visibility of Finland’s dark and gloomy winter days, particularly with an extra-long truck, certainly appreciate this additional support.

The MirrorCam provides even more benefits, especially during the winter months. The system functions reliably in all weather conditions as the camera lenses are heated once temperatures drop below 15 degrees. Furthermore, the intensity of the light means the MirrorCam ensures good visibility even at night. And, the compact design of these cameras means they are far less prone to getting dirty, for example, from the slush. 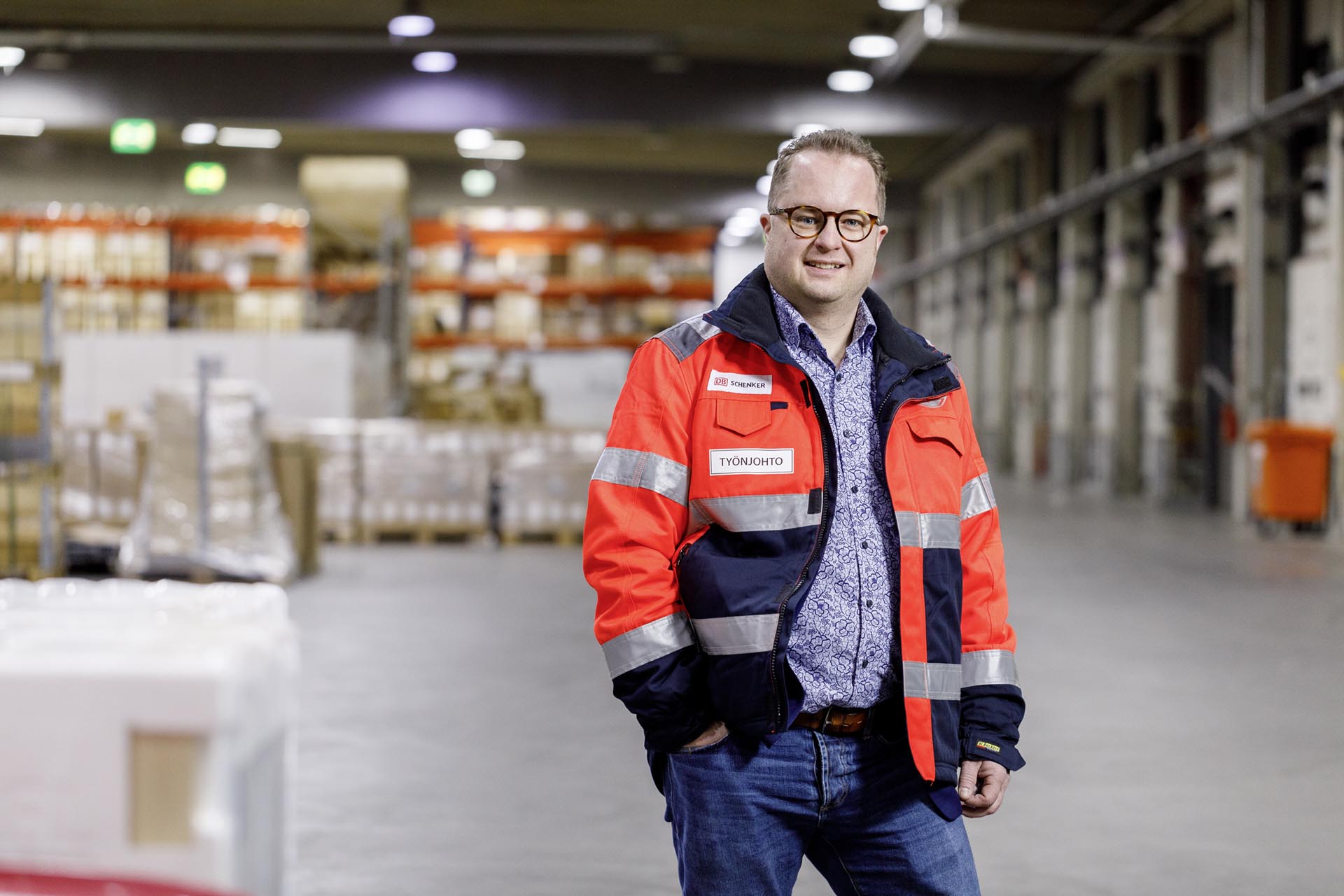 Support from Active Drive Assist in all speed ranges

In addition to the MirrorCam, the new Actros boasts several other innovative features – certainly a valuable asset when faced with challenging winter conditions. The new Active Drive Assist, for example, supports the driver when braking, accelerating and steering in all speed ranges. Or Active Brake Assist 5, the latest generation of emergency brake assistants.

An improved version of the Predictive Powertrain Control, the intelligent cruise and transmission control, has been included in the new Actros. With additional map material, it is also practical for inter-urban routes. A big plus for those navigating the sparsely populated regions of Finland, in particular, and not forgetting the new Multimedia Cockpit with its two new digital displays and convenient, intuitive operation. 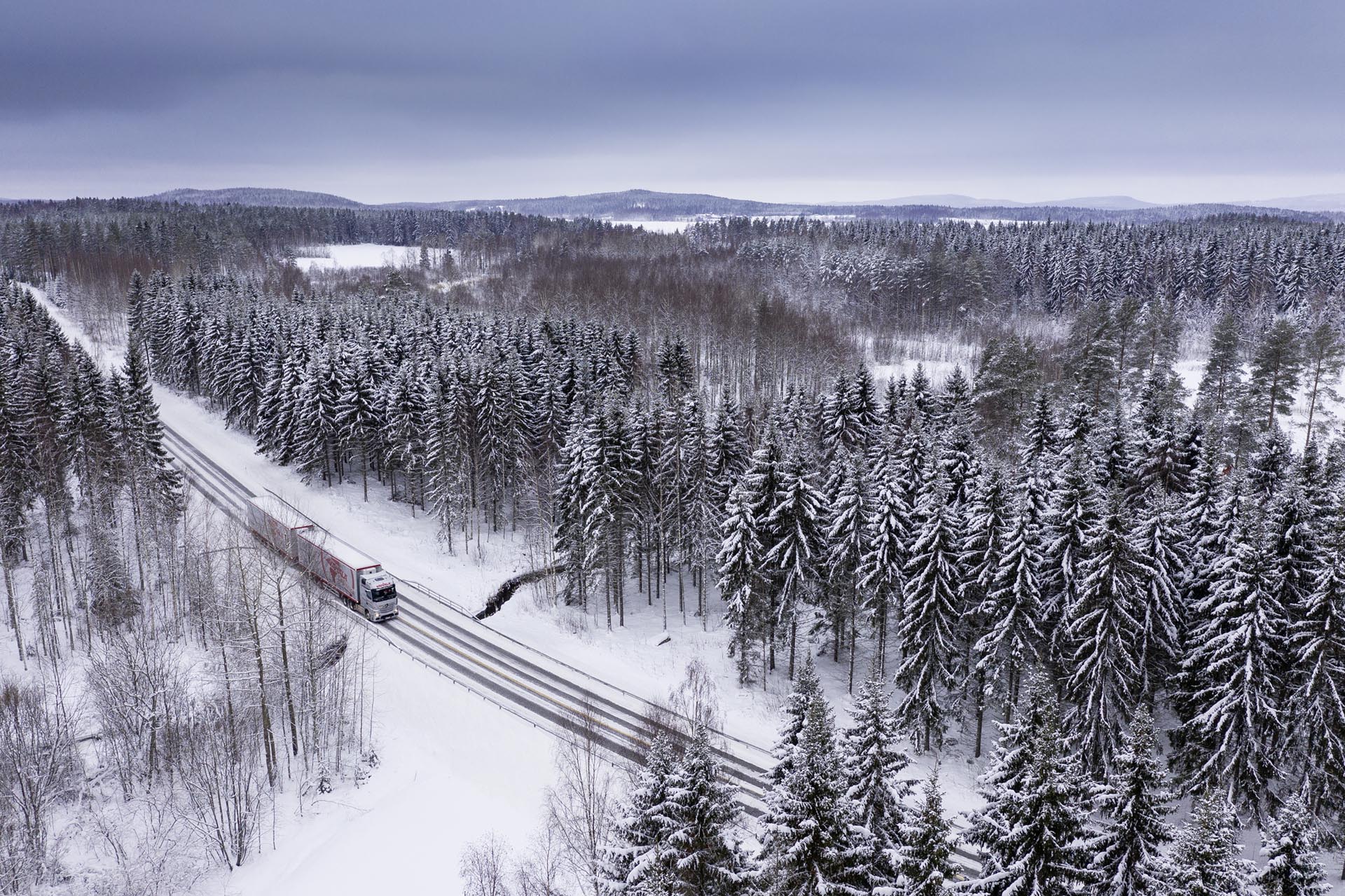 Predictive Powertrain Control increases not only safety but also fuel efficiency – an essential aspect for Ville Vähälä. “Mercedes has certainly reached new heights here with this feature.” Further leverage here includes the economic Euro VI engines, finely tuned drivetrain configurations and other improvements to the aerodynamics, thanks in part to the absence of outside mirrors. As a result, Vähälä’s 65 trucks travel eight to nine million kilometres every year. The reduced fuel consumption is thus noticeably reflected in diesel costs.

Long distances covered in often adverse weather conditions, through sparsely populated regions and with customers who can’t tolerate downtimes: circumstances that demand nothing less than maximum reliability. Since purchasing his first Actros in 2006, Ville Vähälä has only had positive experiences with Mercedes-Benz. “We can cover up to 150,000 kilometres between two service appointments – that’s extraordinary.” The new Actros boasts a particularly solid and durable design. It is supported by sophisticated axles, frame components, chassis and suspension components, and an operations-oriented braking system. Vähälä also makes the most of the comprehensive truck services offered by Mercedes-Benz. “All of our trucks are covered by Service Contracts and are fitted with Mercedes-Benz Uptime. As a result, we do not need our own workshop anymore,” he explains.

Vähälä Logistics, with its headquarters in the northern Finnish city of Oulu, has around 200 trucks in operation, including vehicles from subcontractors. Mercedes make up two-thirds of the company’s 65-strong fleet of trucks. Their freight ranges from pulp for paper manufacture to medical products, not to mention foodstuffs for supermarkets. Another important pillar is the transport of cargo on behalf of DB Schenker. Vähälä functions as a national network partner of the German logistics giant.

Finland’s transport market is undoubtedly a challenging environment. For a country almost as big as Germany, it only has 5.5 million inhabitants, most of whom live in the southern and western regions. Nevertheless, goods need to be regularly transported to the most remote parts – regardless of the weather! 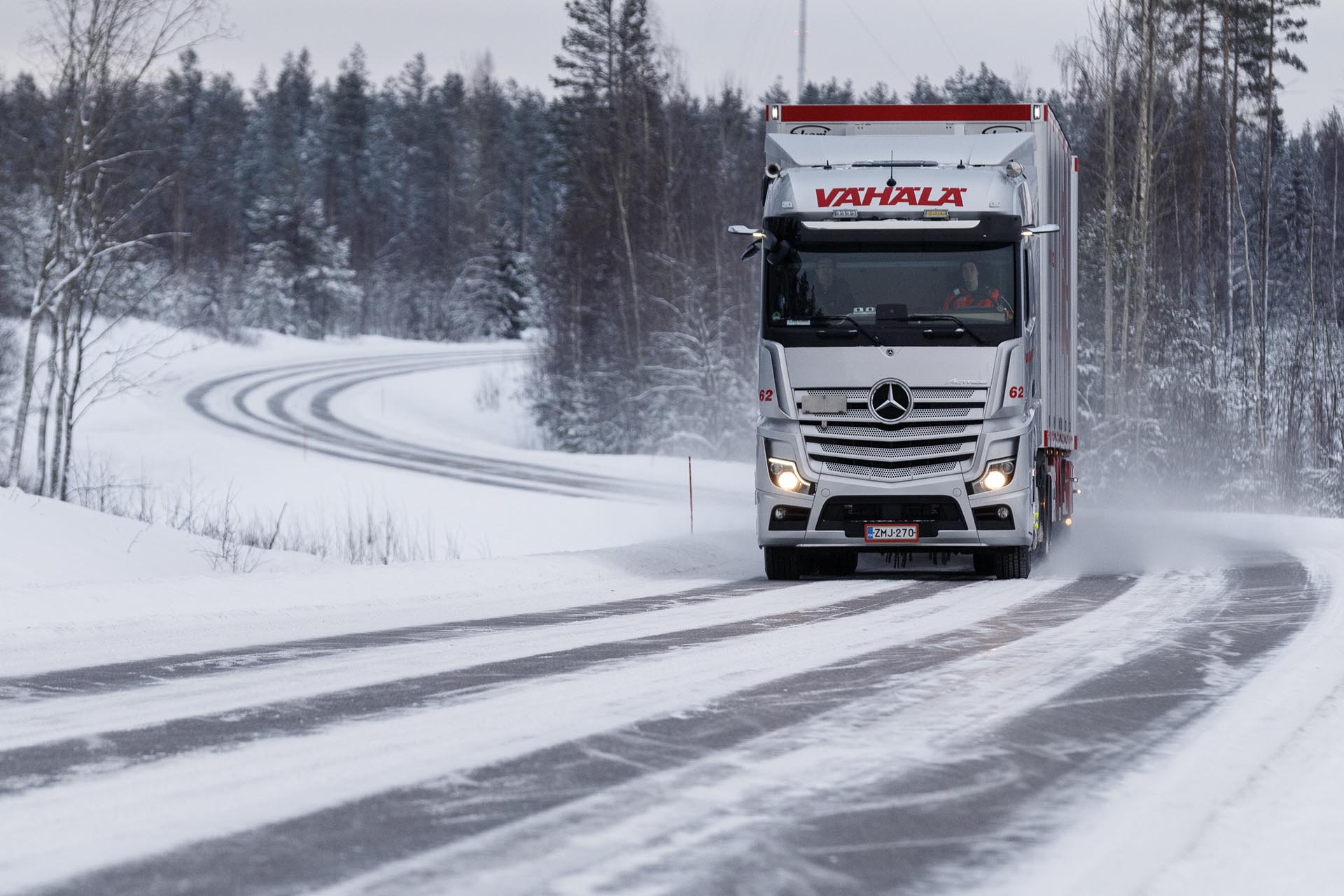