Tasmania mid-winter, and it is still just as cold as when the state was little more than a penal colony. There is one exception however, it is considerably warmer in the cabin of a Kenworth T6… Seriously though, we’re here to checkout a new concept that increases log truck stability and payload. 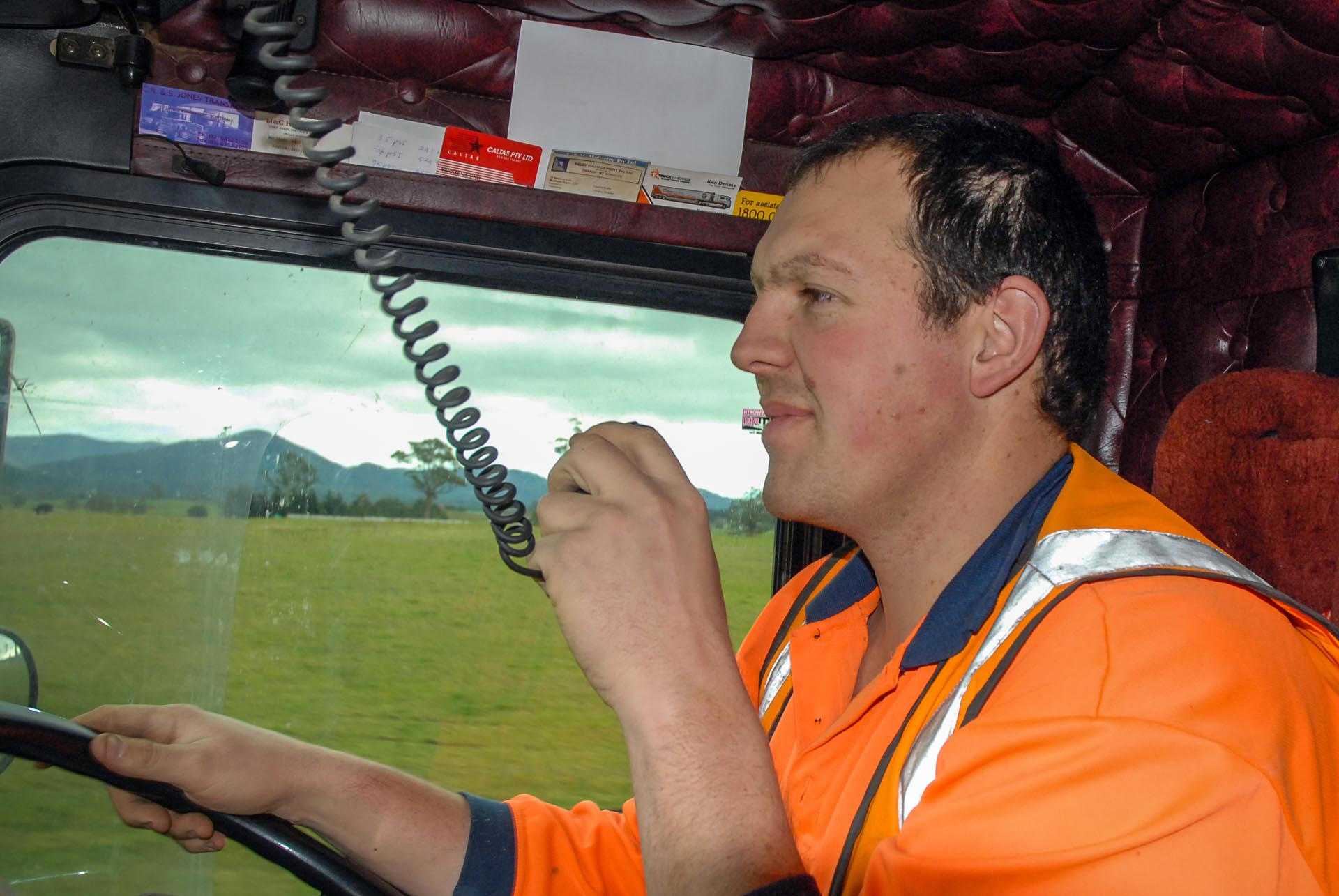 Damien Cassidy answers a call on the UHF radio.

It was a little before three in the morning when the alarm on the bedside dresser broke the stillness. Damien Cassidy reached out and quickly turned it off, quietly slid out of bed as he did every morning then peered in on his newborn daughter as he headed to the kitchen to make a coffee. While the kettle boiled he gently placed a few pieces of wood in the heater.

Moments later Damien stepped outside and headed towards the Kenworth T6 parked beside the nearby shed. The wind was ice cold and the rain undecided as to whether or not it would turn to snow, but that is how it is most Julys in Tasmania.

This morning was like most others, Damien would take the Kenworth T6 he’d loaded the day before to the port at Bell Bay an hour or so to the North West. It was just on daybreak when he arrived and luckily enough there were only a few trucks ahead of him. By the time Damien had taken off the chains a huge loader had appeared to lift off his logs. 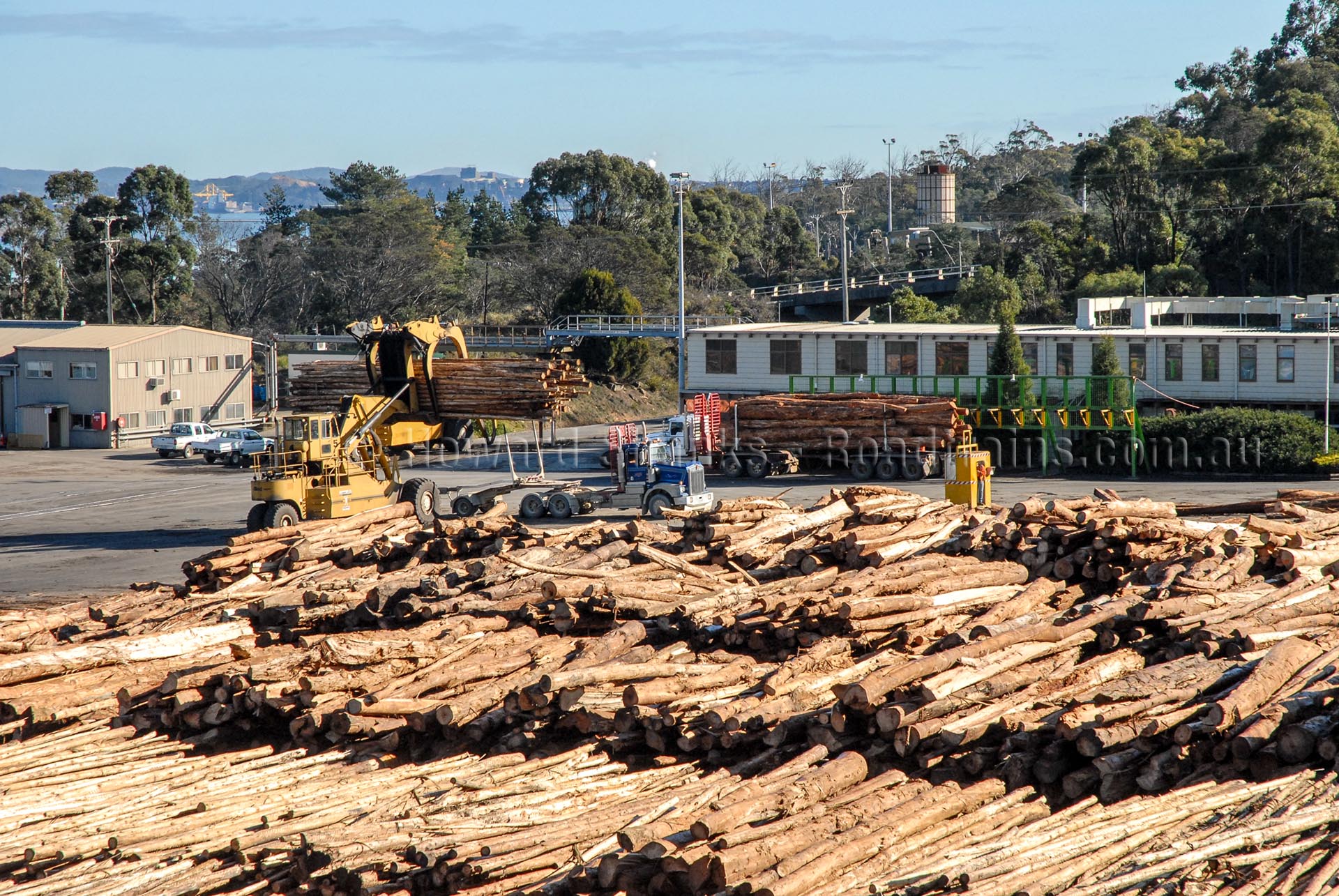 Unloading at Bell Bay early in the morning.

Once the logs were off the trailer it became pretty obvious there is something different about this Kenworth T6 and its jinker, and that is what we were here to see.

Some time back Tasmanian based logging equipment builder Graeme Elphinstone quietly unveiled another of his industry leading firsts. It’s called a ‘Dolly-Logger’ however some folks down here also refer to them as the ‘Elph-Link’ after it’s inventor. Apart from the fact it gives an average increase of nine and half tonne payload over a conventional jinker, vehicle stability is also increased.

The mainstream press in Tasmania like all the other states on the mainland, rate any truck related incident with the same importance as world-war-three. Needless to say, that some weeks, truck rollovers can make up the bulk of the news headlines in Tassie. The next thing there’s a conference, followed by the knee jerk reckon where politicians vying for a few quick votes basically want to reduce payloads.

“Not so”, says Graeme Elphinstone.

Graeme’s had a lot of experience in the logging industry and he and his company has been at the forefront of some innovative concepts that are now embraced in similar industries as well. 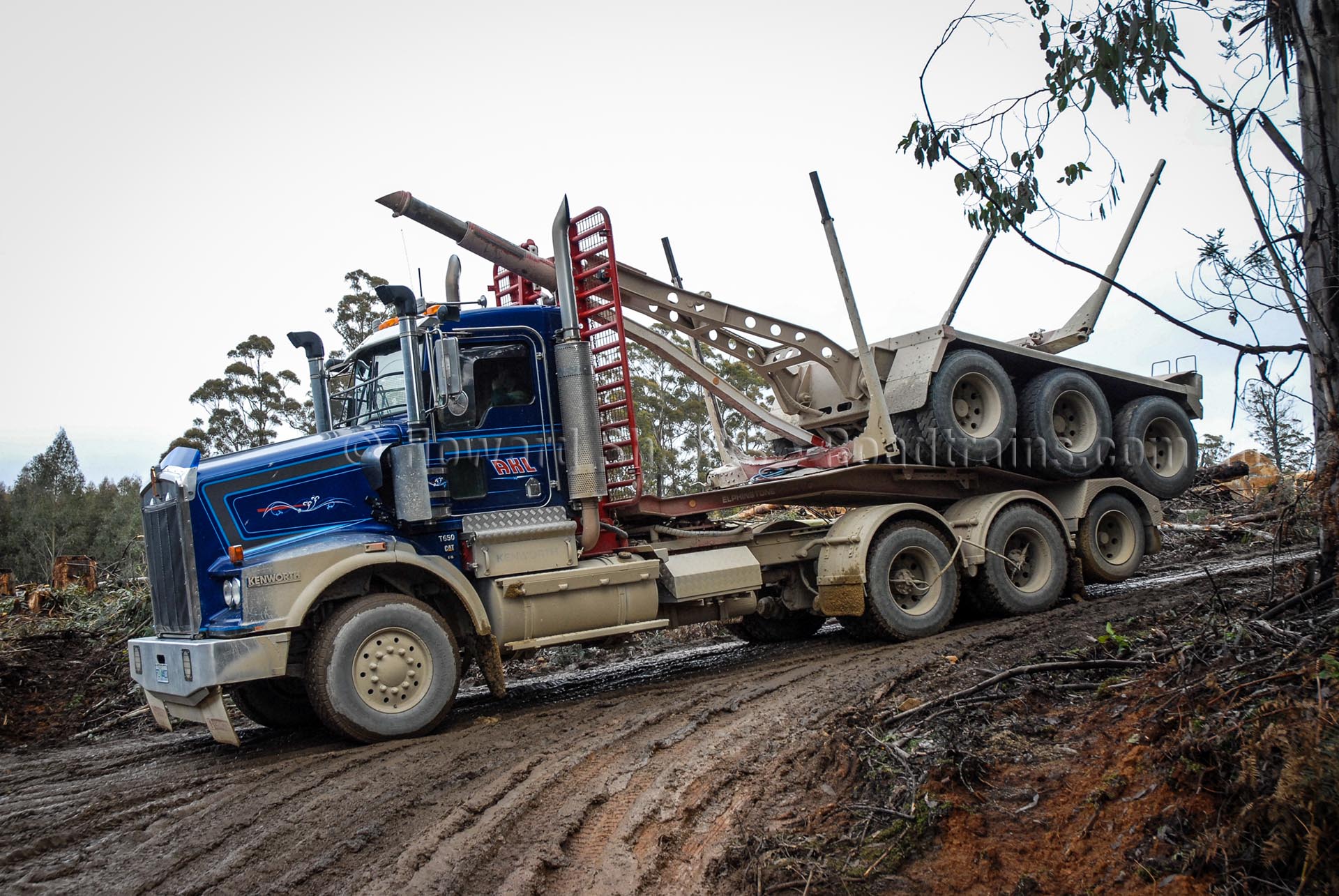 “The ‘Dolly-Logger’ is a concept we experimented with some time ago to reduce the overall height of the load of logs which in turn lowers the centre of gravity of the vehicle,” Graeme explained. “We were able to adapt some of the technology from our ‘Easyloader’ self-loading trailers which enabled us to make the ‘Dolly-Logger’ and jinker fold up into a compact unit for the empty run back to the bush block.

To better understand how the ‘Dolly-Logger’ works Graeme gave us a quick run down the driving force behind its evolution. “For some time log truck rollovers have been on the increase here in Australia, similarly as they were in New Zealand some years ago, Graeme recalled. “Something had to be done to reduce this and there are still several proposals currently up for discussion. However, the most common thread, if you like, that all the proposals contain was a reduction in the overall centre of gravity of a log truck.” 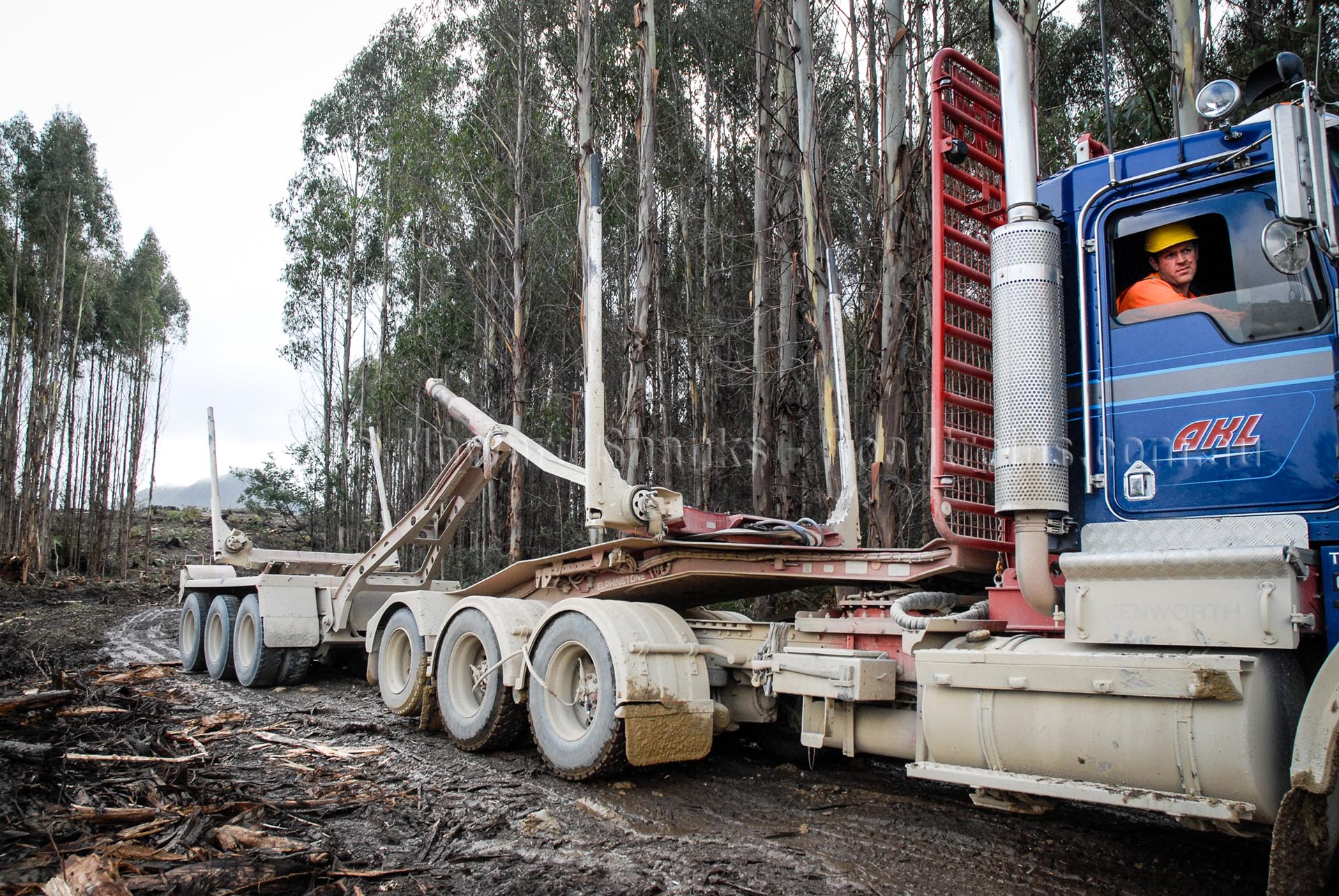 Damien unloads the Dolly Logger at the landing

“We’d done some research on how trucks roll over and there is a lot of data readily available on the subject as well,” Graeme explained. “One thing we discovered was that in a lot of cases it is the trailer that rolls over first and in most instances the driver is unaware that the trailer has passed the threshold of no return before it was too late. Subsequently, to us it became logical to make the trailer more stable, basically to reduce its rearward amplification.”

“What we ended up achieving along with enhanced vehicle stability is productivity gains through payload increases,” Graham added.

“Loading of the unit when empty is simply done by using a standard loading ramp or bank of earth,” Graeme explained. “No hydraulics or winches are required. The rear trailer is folded onto the ElphLink trailer then the slider on the truck is unlocked. By simply reversing, the ElphLink slides up onto the chassis of the truck and the slider locks it in place for the empty run back to the bush.” 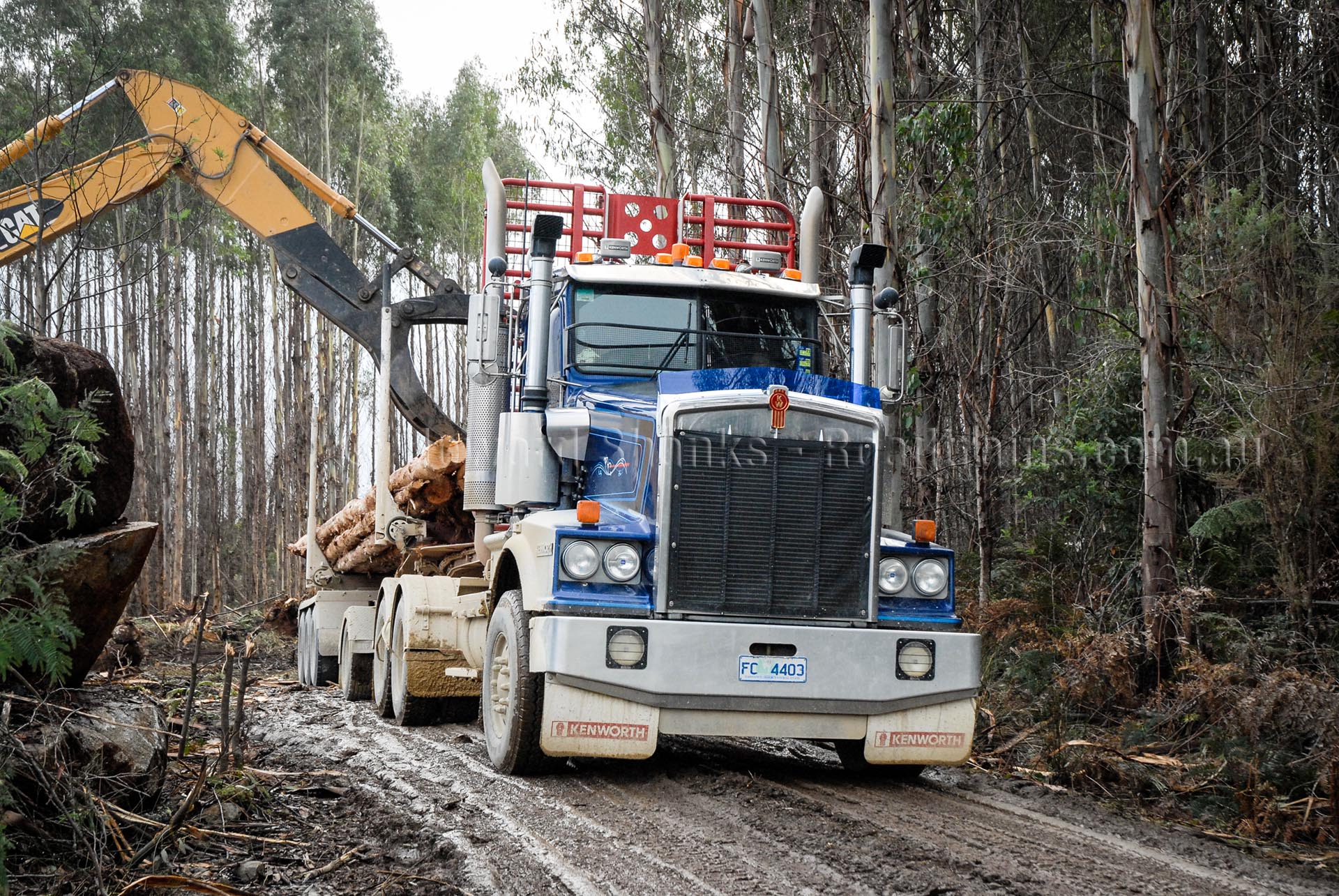 “Unloading is basically the same as a normal jinker,” Graeme continued. “Apply the trailer brakes, unlock the slide, move the truck forward and the ElphLink slides off and is ready to be loaded with logs, it’s that simple.”

Damien drives for Springfield based Andrew Lette who runs one of the tidiest logging operations in the north east of the state. Along with this T6 Andrew also has two other T6s, one similar to Damien’s with the ‘Dolly Logger’ and the other with a traditional jinker. Then there are two Kenworth T9s.

Andrew’s been logging since he was teenager and started out on his own about ten years ago. He is the first to admit that logging is a hard way to make a quid, but insists that it has its own rewards. And, a quick glance around at Andrew’s equipment reveals a man who is meticulous and organised, all the machines even down to the chainsaws are impeccably clean and that is no small achievement considering the muddy conditions they are operating in.

Andrew cites the Kenworth trucks as the back bone of his operation and adds that the service he gets from the local Kenworth dealer in Launceston is first class. 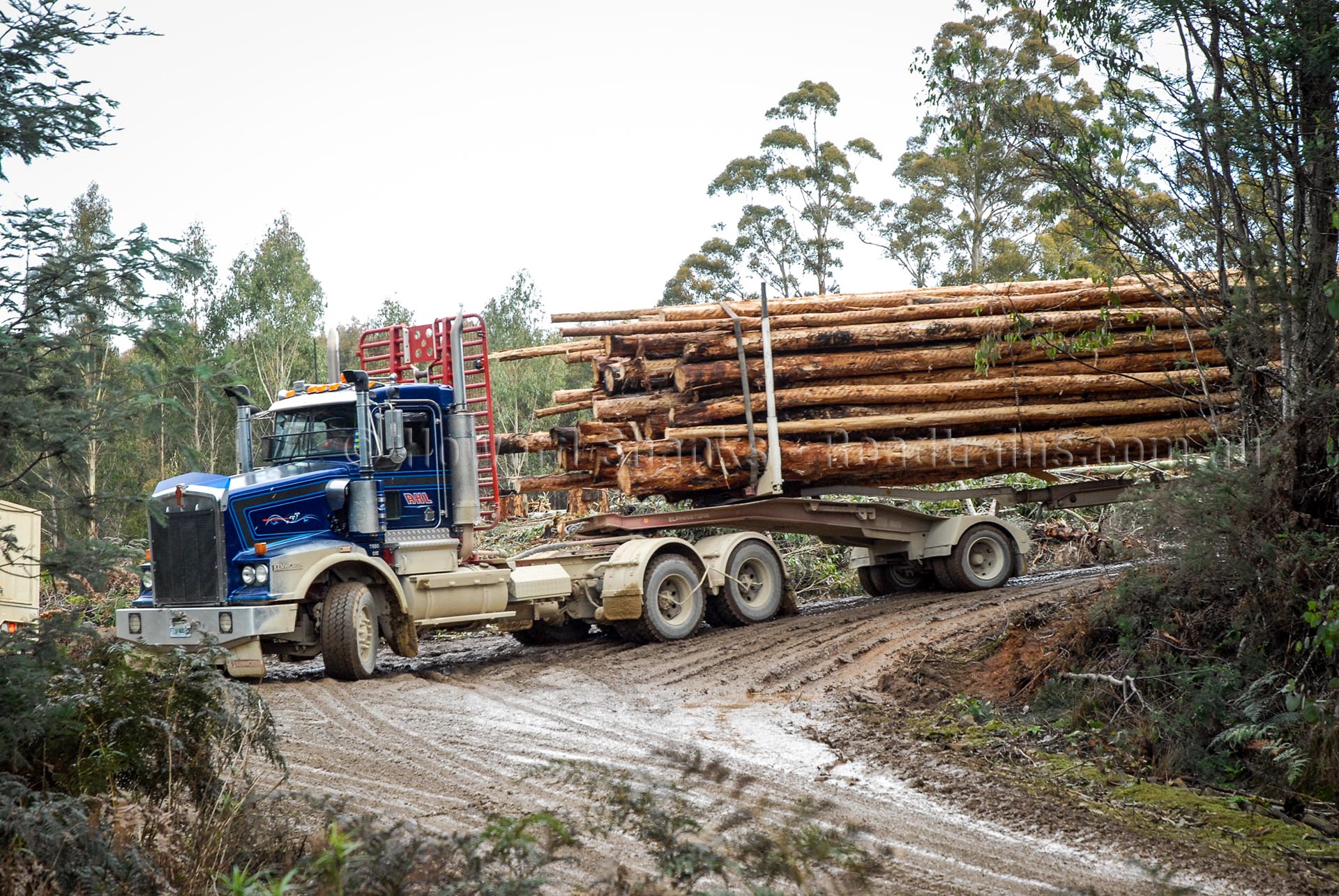 “The gear that Graeme Elphinstone builds is equally as impressive as the Kenworths that haul them,” Andrew volunteered.  However, it is when you see where these trucks and trailers operate that it really instils Kenworth’s slogan, Australian Made World’s Best, we’re got some pretty rugged country down here.”

At the time of writing this Kenworth of Damien’s had clocked up 385,000 trouble free kilometres. A 550HP Cummins coupled to an Eaton RTLO20918B transmission is the driving force of this T6. Meantime the rear end is Kenworth’s Airglide with Arvin Meritor RT46-160GP rear axles with driver controlled diff locks (DCDL) at 4.56:1 ratio. Up front the steer axle is the heavy duty MFS-73.

By mid-morning Damien was well into the high country of the Mathinna Plains on his way to the log landing at Mt Albert. The sealed bitumen road of the low lands had long given way to a muddy track. Every now and then the trailer on the back rattled a little as the Kenworth T6 lurched through each pothole.

“They’re (pot holes) hard to spot when it is so muddy,” Damien mused as he pulled the steering wheel to the left to dodge another pothole. 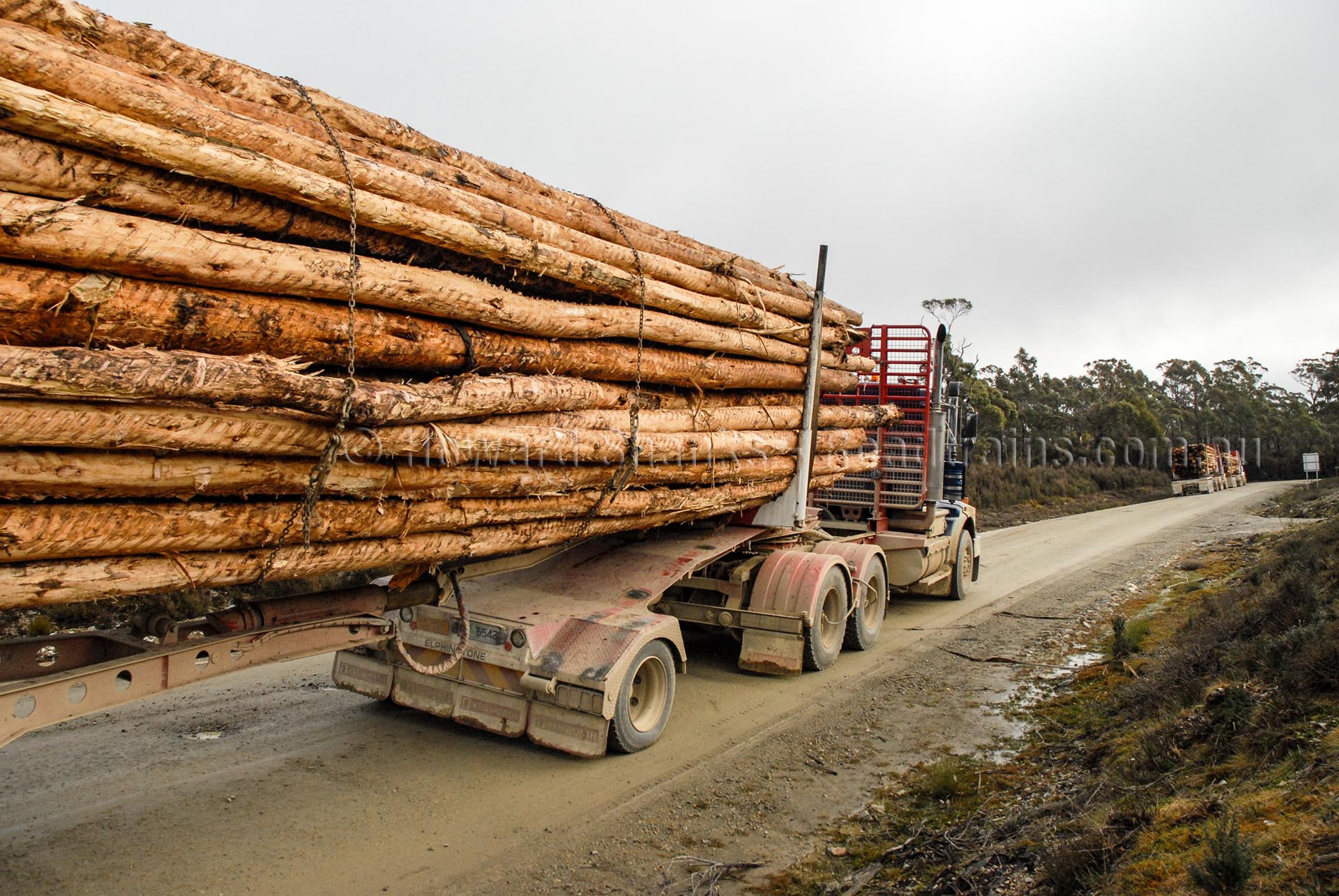 Incidentally, we’ve seen these trucks in the summer months and they are truly a credit to their drivers as they glisten each day.

Damien cites the increased vehicle stability as a reassuring feature along with the fact there is only one bunk of logs, which means there is also productivity gains loading and unloading the unit.

“This is one of the longer coupes we cart from and I average my two and half loads each day,” Damien added.

From a traction point, Damien told us that once he lets the AIR-CTI (Central Tyre Inflation) down he can virtually go anywhere. “These trailers are surprisingly easy to tow and very manoeuvrable,” Damien said. “They don’t cut in any more than a normal jinker, if fact if anything with the two turntables they track better.

“We cut our logs to 14.5 meters that puts the combination at 19.5 meters long,” Damien explained.  “We are permitted an all up gross of 54 tonne (total payload – 37.5 tonne) and you can see the overall height of the load is still below the top of the pegs which, is very low compared to a traditional jinker or quad dog configuration.”

By late afternoon Damien was on his way home with a load ready for the early hours of the next morning. On top of the plains, the dark clouds peeled aside and the sun for only a moment gleaned through providing one of those rare but brilliant photo opportunities, there were a few nervous moments however when the camera’s lens flogged up adjusting to the near artic conditions outside the Kenworth’s cabin.

Back inside the warmth of the cabin once more, Damien guided the Kenworth T6 down the mountain with ease and to the observer there was no indication there was any additional weight or that the ‘Dolly-Logger’ was fitted.

And, according to Graeme Elphinstone that’s how it should be too. 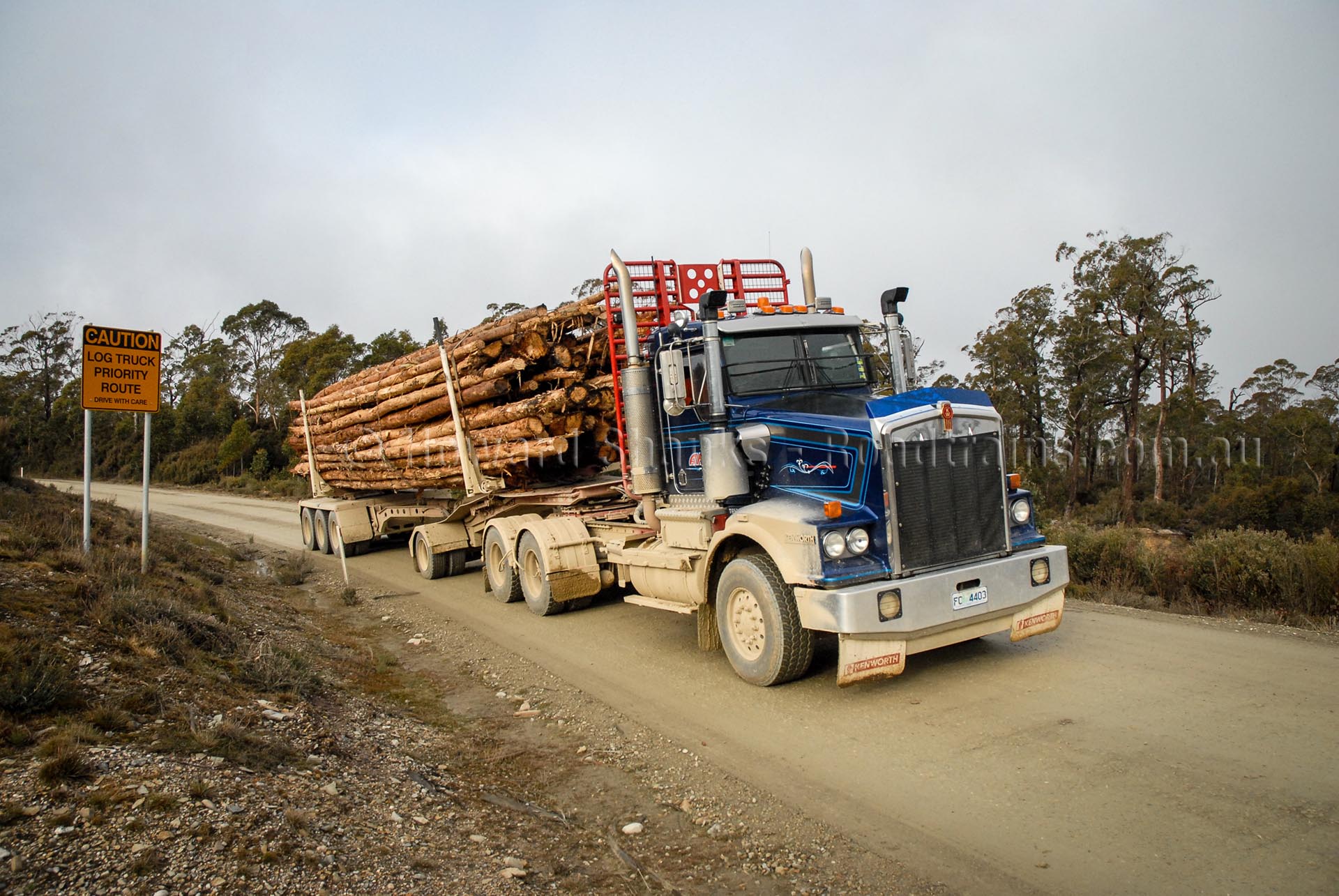