Fuel economy is one of the more pleasing attributes that many operators report from their DD15 engines and that’s closely followed by reliability. They are the primary reasons why Hawkins Road Transport specified a Detroit DD15 to power their new 4900 Western Star for their long haul operations. 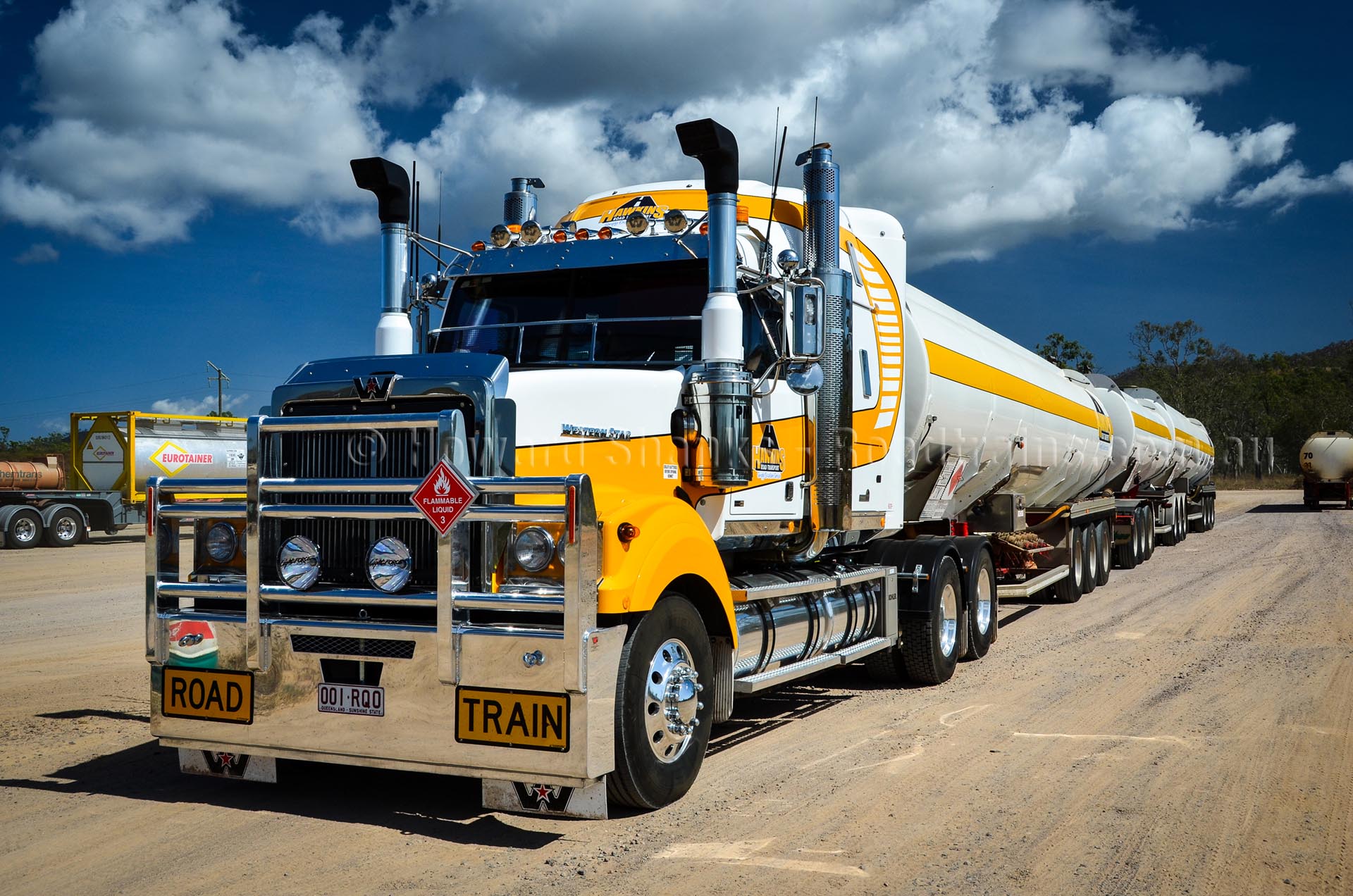 A few days before the departure date, a short succinct message read, “meet our driver Pinky at the Stuart road train assembly hook-up area on Tuesday at 7am”.

The plan was to hitch a ride in the new Detroit powered Western Star 4900 on its maiden run from Townsville along the lengthy straight road that is the Flinders Highway as it traverses west to deliver vital fuel to mining communities dotted around western Queensland.

It’s not only a demanding race against the tyranny of distance, but also a constant battle with the tribulations that mother nature unleashes in the vast hostile outback that is the biggest challenge these operators face to ensure their supplies arrive on time. 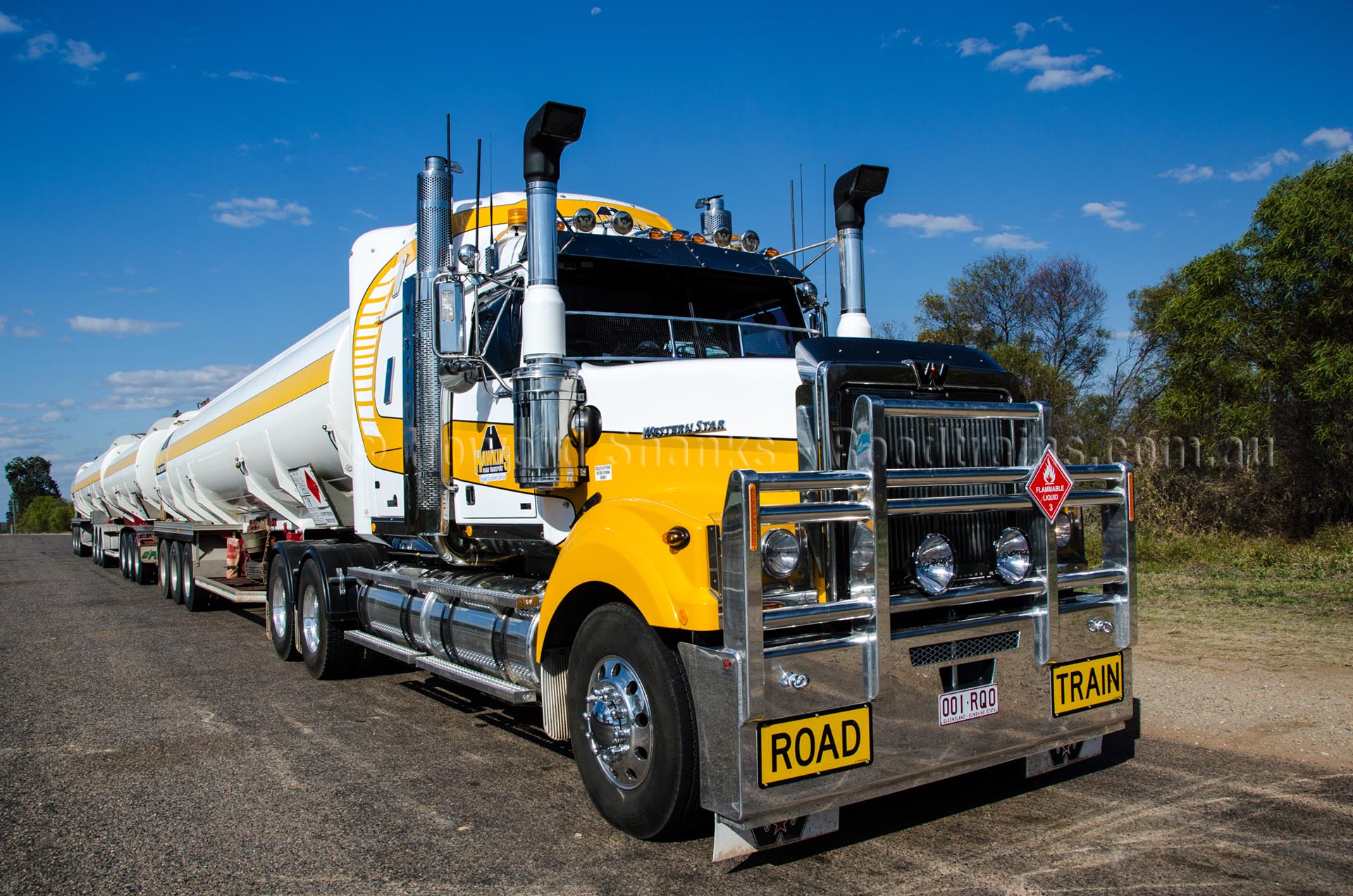 Mining thoughtout Western Queensland is big business where profits are measured in cents per grams and when the machinery that mines the minerals stop… for even a moment… it can cost tens of thousand of dollars.

Needless to say the demand on trucking companies like Hawkins Road Transport to deliver goods to these remote mines is high. Much higher than you’d expect. For instance, at some of these mines that operate large fleets of dump trucks, loaders and diggers, they can consume a road train load of diesel in a just a few days.

A little before seven on Tuesday morning the North Queensland sun was already scorching. I spotted the lead trailer and dolly parked in the middle of the yard, but there was no sign of Pinky or his 4900 Western Star.

An hour or so later a bright flash of the sun reflecting from the polished grill off in the distance signaled Pinky  Pink’s impending arrival. 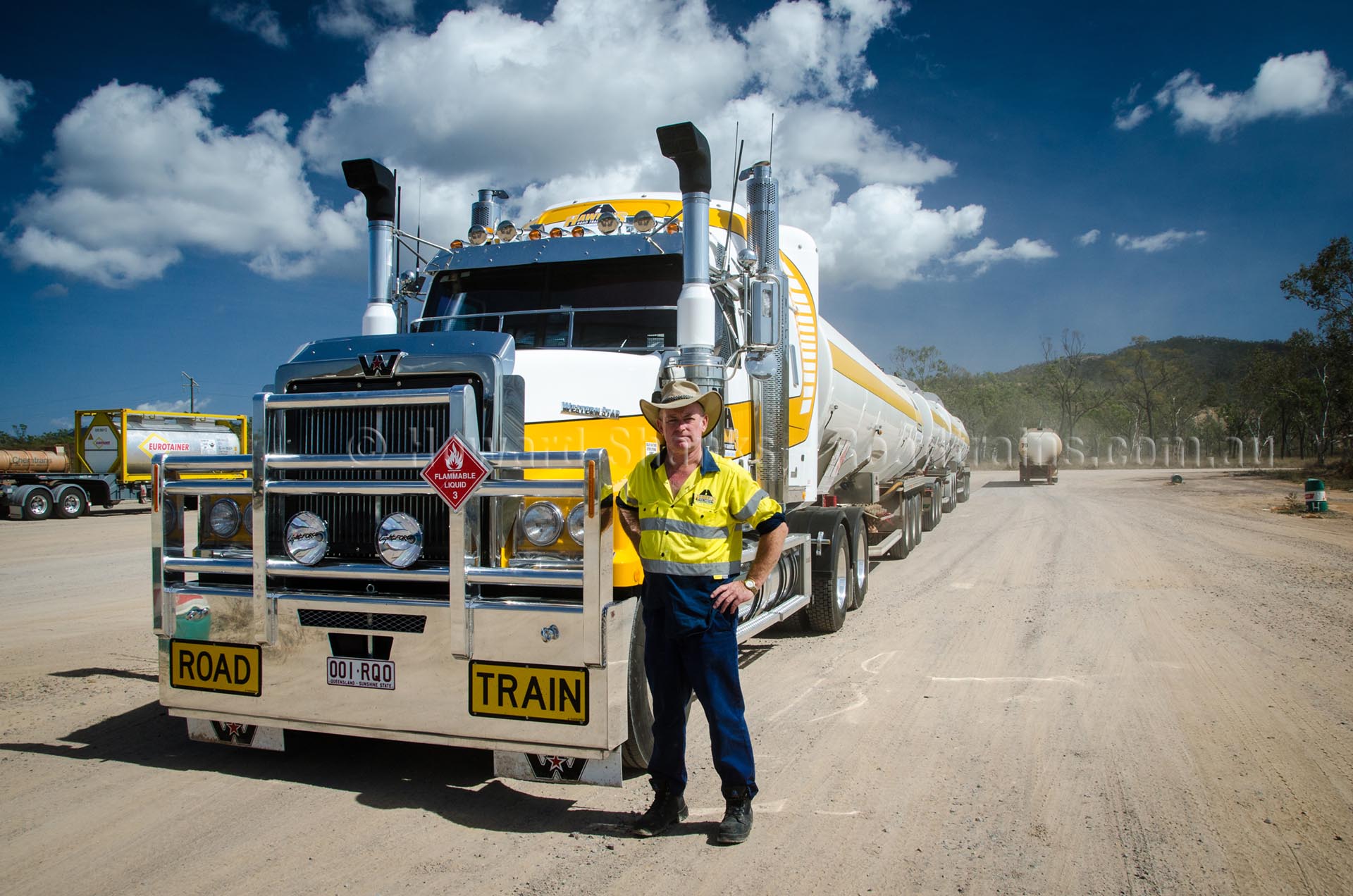 Pinky  wasted little time as he guided the 4900 Western Star through the maze of parked trailers and pulled his dog trailer combination in behind his lead trailer and unhooked it before heading around to the front of the lead trailer to couple the road train together.

He climbed out of the cabin and apologized for being late adding, “that’s how trucking is some days”, as he wound the legs up on the lead trailer.

After walking around the combination for one final check and the customary turning of the road train signs, he paused in front of the unit and pulled his phone from his top pocket and took a quick photo. “It’s a good looking rig,” he mentioned. Then asked if I was right to go.

With the commemorative photo taken it was time to hit the road at long last. 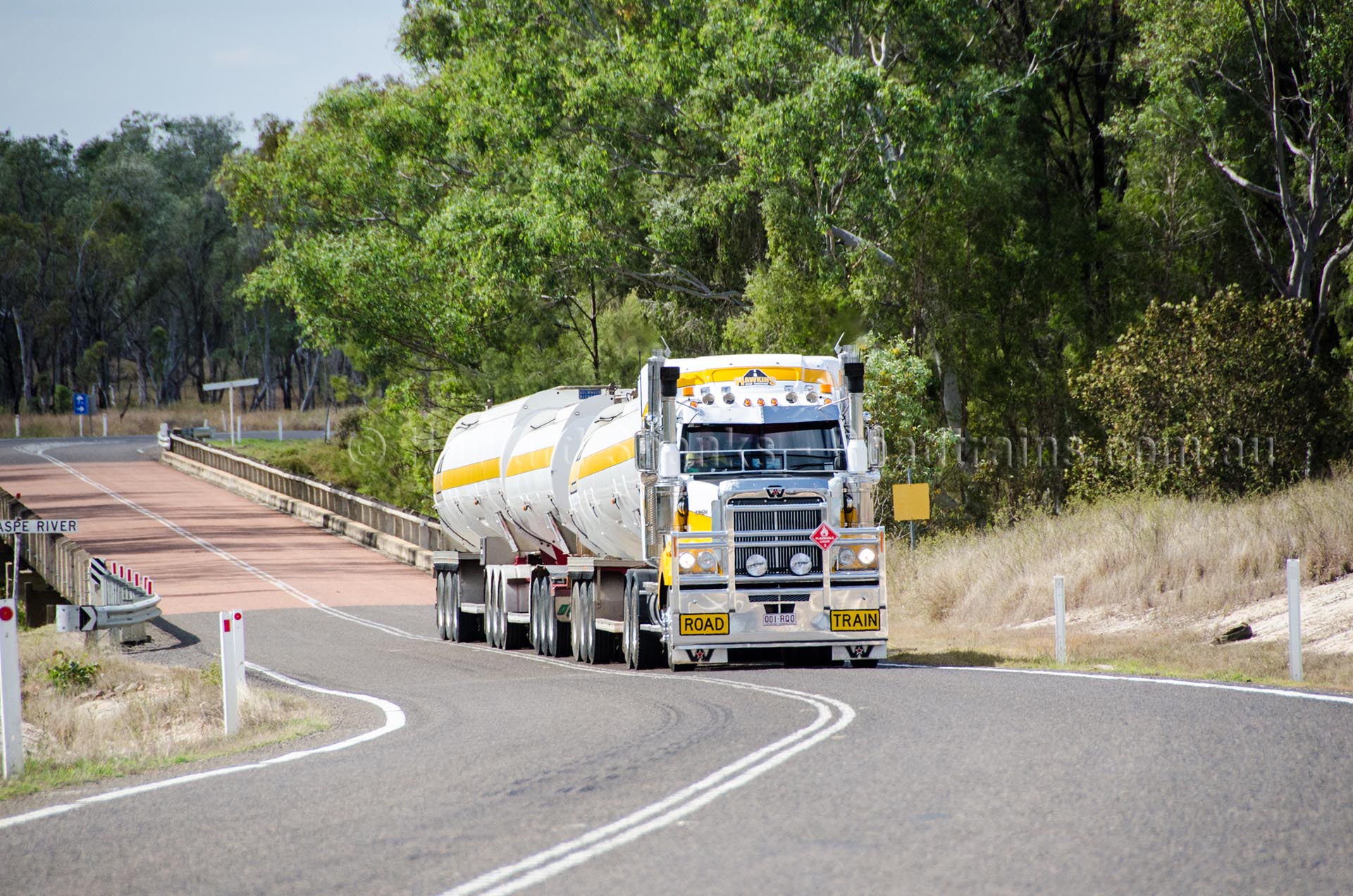 Pinky stowed his hat on the seat and filled out his logbook before depressing the clutch then slipping the gear stick into the low slot.

The DD15 under the hood bit hard as the clutch was eased out, and the 4900 Western Star eased the trailers forwards.

The DD15 is a 14.8-litre, in-line-six with four valves per cylinder and two overhead camshafts. It’s built on a stiff, strong cast iron alloy block designed to dramatically reduce noise and vibration. It has a rear gear train, and forged steel, counter-weighted crankshaft with huge main and rod-bearing journals for long life and high load-bearing capacity.

Interestingly the camshafts are hollow, not solid as is typically the case. This, Detroit Diesel says, lowers the weight and inertia of the camshaft, improving throttle response. Each camshaft is dedicated: one for the intake valves, the other controls the exhaust valves and the integrated Jacobs engine brake

Inside the DD15 there is a lot happening, however two particular features give the DD15 its personality and performance characteristics: the Amplified Common Rail System (ACRS) fuel injection system, and turbo-compounding.

ACRS develops injection pressures up to 32,000 psi in a two-stage process. A gear-driven high-pressure fuel pump produces pressures in the common rail of 13,000 psi, while the final pressure boost is achieved hydraulically within the injector itself. The system is capable of up to five injection events per cycle, optimizing combustion efficiency while reducing engine noise dramatically. 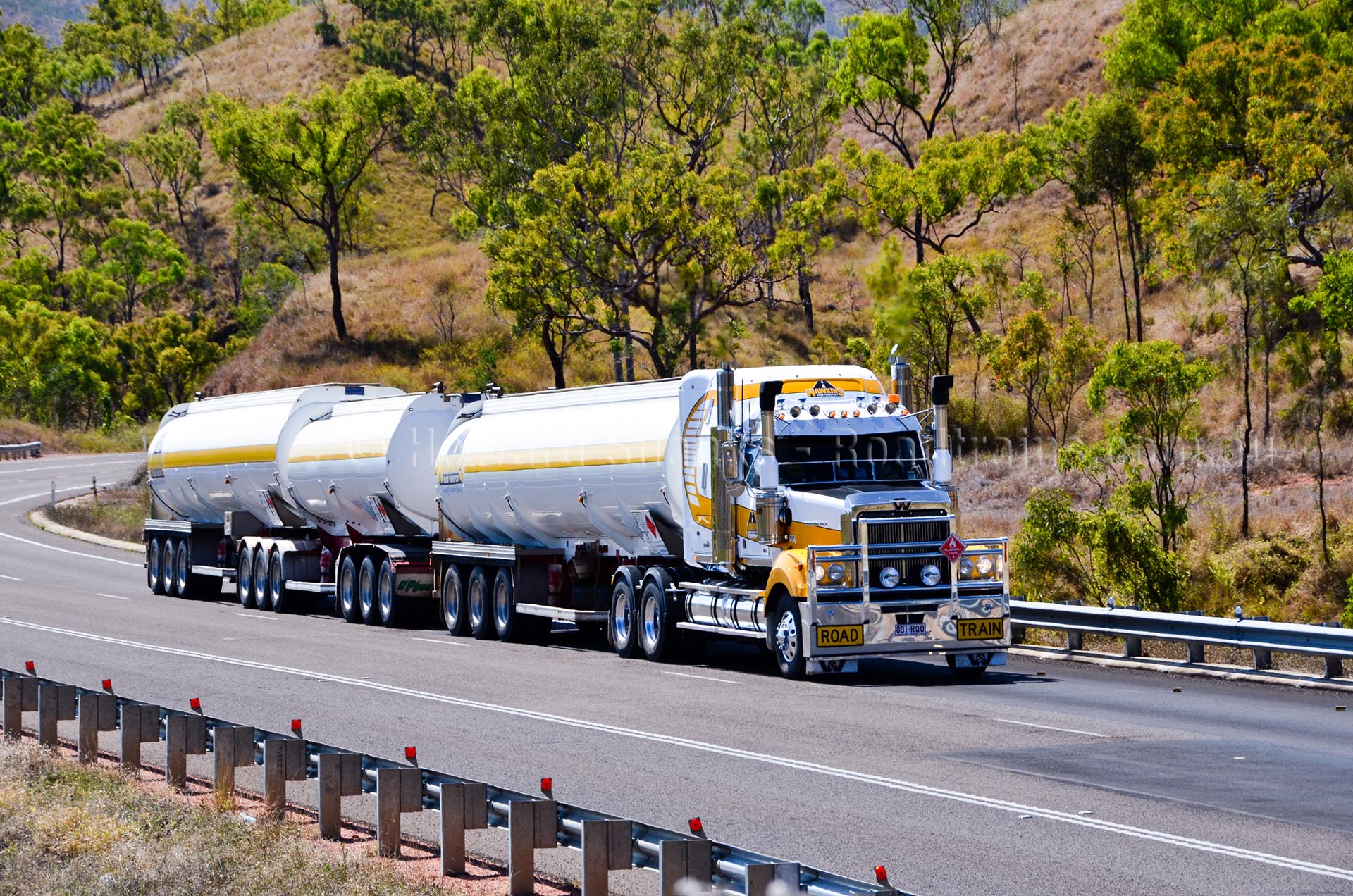 All this enables better combustion management at any rpm or engine load, and the next-generation DDEC VI electronic controller manages it all. Of course, injection pressures of that magnitude require extreme fuel filtration, so there’s an easy-to-service two-stage fuel filter and water separator mounted on the left side of the engine. Both use cartridge filters, so replacement is accomplished without filter wrenches.

Then there are the turbochargers. There are indeed two of them, but they’re not series-turbos as we are use to seeing on Caterpillar Acert engines. The DD15 uses a simple primary turbo to boost manifold pressure for intake air management. I say simple, because it’s similar to the proven pre-1999 designs with none of the complex waste-gating or variable-geometry vanes we’ve seen on many engines in recent years.

The second turbocharger is the interesting one, in that it doesn’t play much of a role at all in intake air management. Rather, it creates the manifold pressure differential required for exhaust gas recirculation, and it pumps an extra 50 horsepower or so back into the engine’s rear drivetrain.

The combination of ACRS, turbo-compounding, and the rapid response of the primary turbocharger means that the DD15 exhibits up to 75 percent better torque response than most other big bore engines in the market today. What this means is it spools up very quickly to peak torque in 1.5 seconds as opposed to more than 4 seconds as is the case on many other engines

Pinky is first to admit the new DD15 has a unique personality, that he wasn’t accustomed to at first, and adds that other driver’s might mistake it’s wider power range for flat and unresponsive. “I can promise you, the DD15 is anything but flat and unresponsive,” Pinky, revealed enthusiastically.

“What’s missing is the turbo lag present on virtually every other North American engine I’ve driven lately,” Pinky explained. “On other engines, it takes a moment for the turbo to spool up and build boost pressure after an upshift. Typically on other engines when the turbo is up to speed and the manifold pressure reaches 20-30 psi, the driver hears the whine and feels a surge of power. Turbo lag is virtually non-existent on this DD15. It spools up to full boost in about one and half seconds, compared to three or four seconds on other engines.” 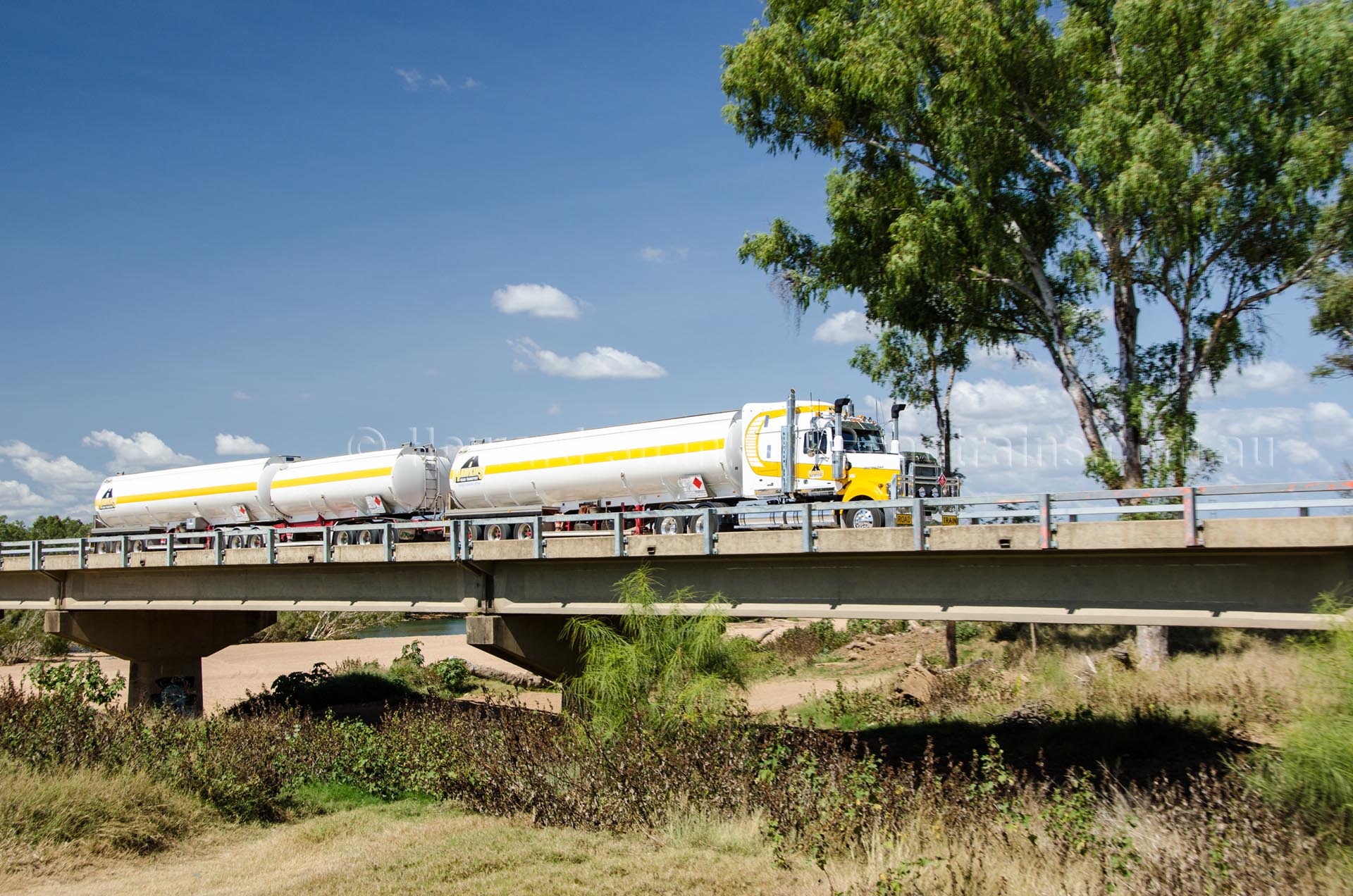 “There is no turbo whine, and I don’t feel any of the post-lag surge I’m used to in the older trucks, because the turbo comes up to speed almost immediately,” Pinky said.

“That means that after an upshift, with the rpm down around 1,000-1,100 rpm, the engine comes up to 90 percent of peak torque before the pedal is even halfway to the floor,” Pinky continued. “The pull is there immediately. It is very deceptive because while the power is obvious from the way it pulls, you don’t feel it coming on they way you do with other engines and there is a possible suspicion that the engine is unresponsive.

The climb up the Mingela Range certainly put the DD15’s turbo compound system to the test. At the base of the climb Pinky slipped the 4900 Western Star out of overdrive then let the Detroit lug right down through the torque range to 1000 RPM before changing down another gear.

I had to agree with Pinky too, when he explained that the theory of torque is widely misunderstood by many drivers, and that numerous drivers will miss the key element in the DD15’s low power profile. Pinky lugged the engine down below 1,000 rpm on a few occasions and the pull was still there.

“Unfortunately, many drivers will be tempted to downshift early, long before the engine has utilised its low torque down to 1,000 rpm,” Pinky advised.

“A bit of training would be useful to get the best out of these Detroit engines, because to get the full efficiency out of this engine, you’ve got to let it drift down to the lower rpm range but who will be willing to pay for the additional training,” he added. 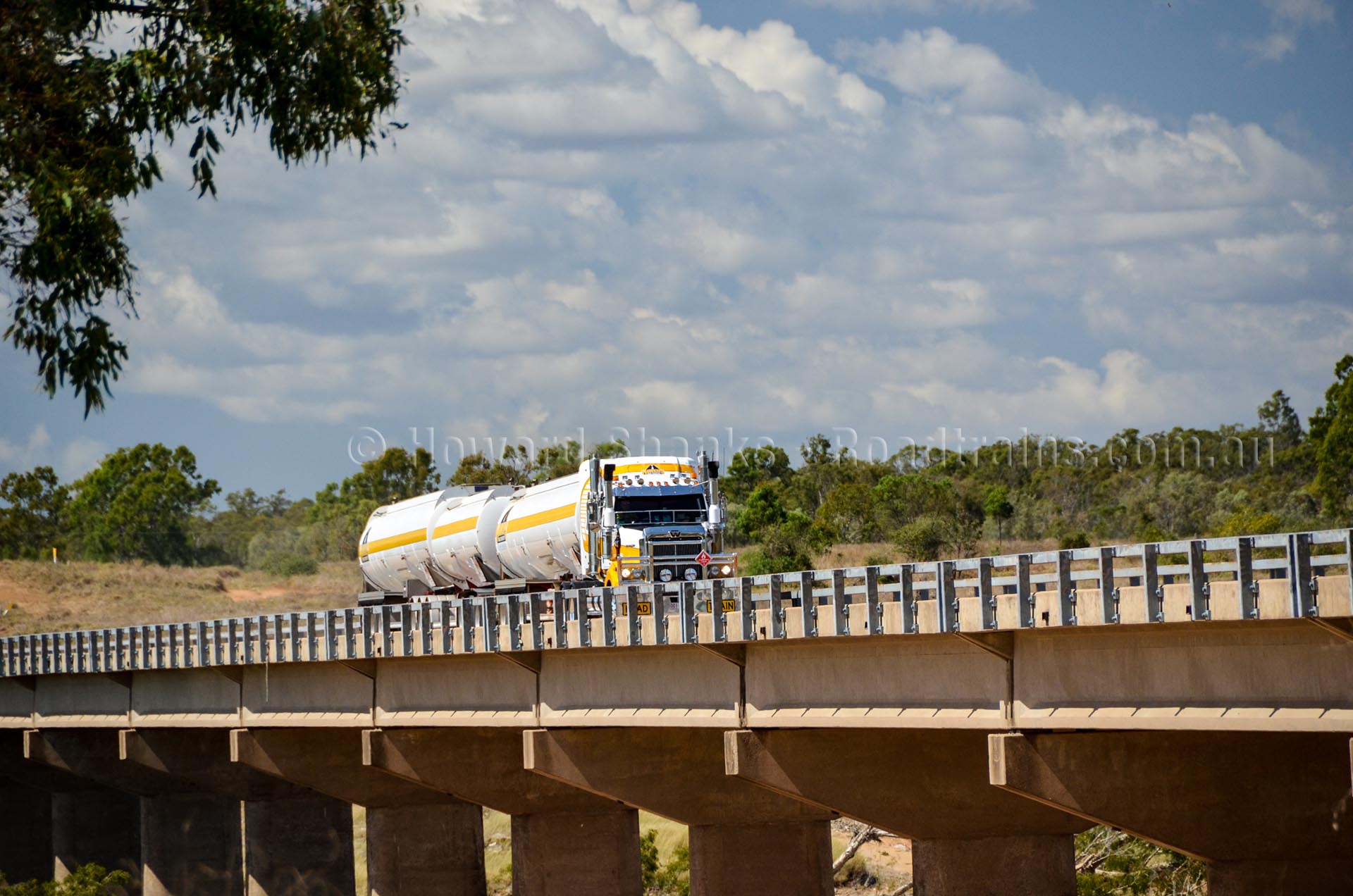 Pinky informed that cruising at highway speeds, the foot feed is very responsive at any point in the useable engine speed range which given the load is testament the DD15 is punching out the power. The turbo reacts almost instantly, giving the 4900 Western Star an almost automotive feel.

“There’s just power there all the time,” Pinky added.

Not far past the Mingela Range, Pinky  pulled into a parking bay to check over the new truck and tap his tyres. The heat from the bitumen radiated up through the work boots, it was like walking on a hot plate. Thankfully everything was okay, and Pinky quickly climbed back into that air-conditioned cabin and got the rig rolling again.

Up here in the top of the Australian continent where the average temperature is around 40 plus degrees, and with a gross combination mass around 120 ton, being able to maintain an average of 90 kph all day is testament enough that Western Star have really got the cooling right with this big beast of burden.

Pinky explained these tri-axle dollies have a few advantages over the more traditional bogie dollies, understandably they allow additional weight to be carried and secondly they keep the rear trailers a lot straighter because they don’t react to every bump in the road.

The big Statosphere sleeper bunk is also another feature Pinky reckons Western Star have done well. “There’s plenty of room to stretch out when you sleep and storage for all the gear you need to carry,” Pinky explained. 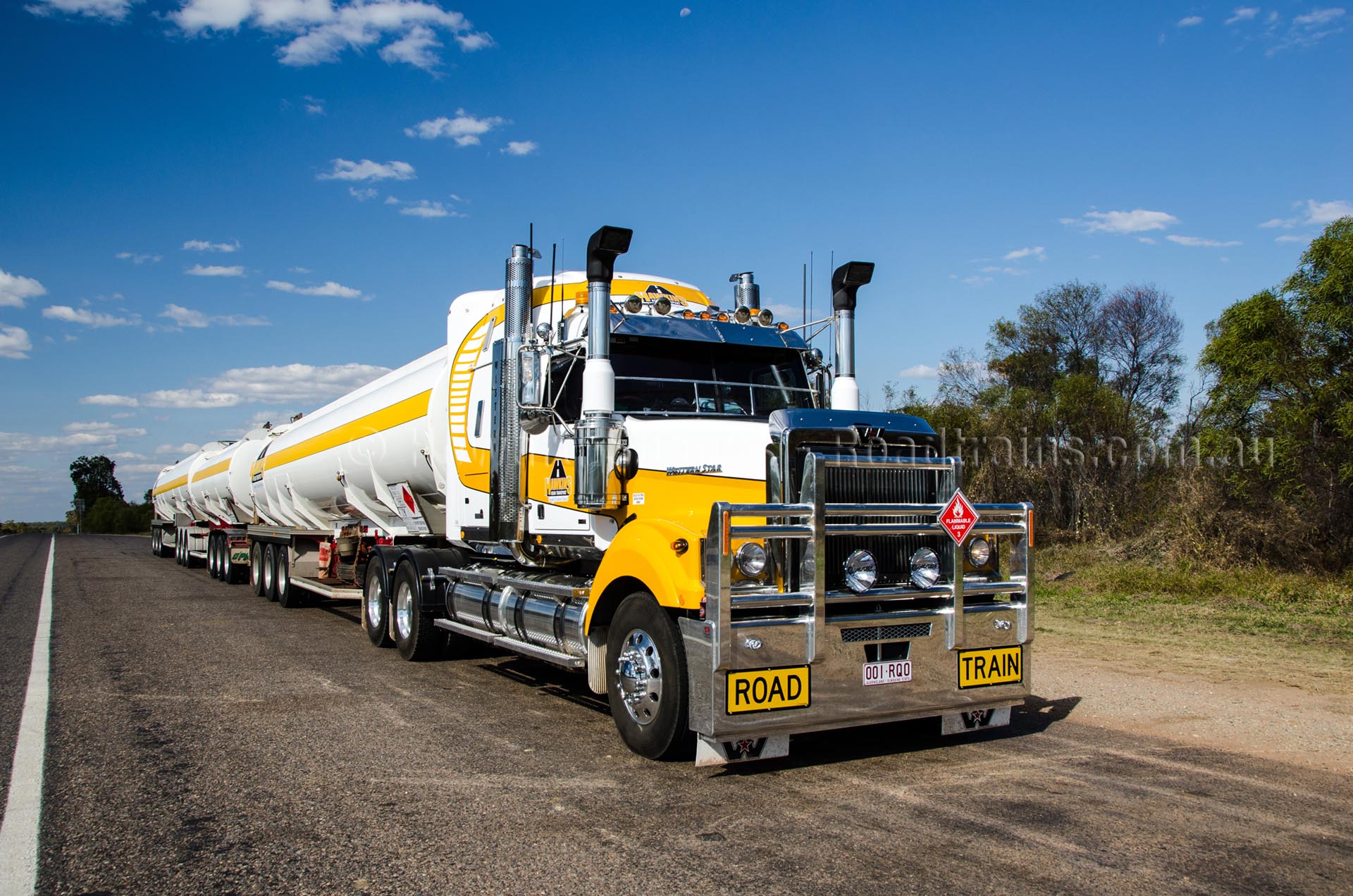 The ride inside the 4900 Western Star was exceptional. Pinky added the handling of this truck is by far the best he’s ever had. Observing his steady hand on the wheel from the rider’s seat and the seemingly effortless ease Pinky  guided the Constellation along the rugged track that is the Flinders Highway, it’s road manners were equally as impressive.

The popularity of Western Star trucks up in the remote country is clearly evident with the number of other operators that are using them too.

While the miles rolled by Pinky told us that Hawkins Road Transport was established in 1921, by Bartholomew and Rosina Hawkins and was the first transport company in Queensland to run in opposition to the railways in Brisbane.

At the time, the Hawkins’ operated a small services station in Ipswich and their transport business grew when they began carrying Mobil drums of fuel from the Brisbane fuel depot to their service station far more reliably than the railways did.

Because Hawkins is a family based company they understand family needs and that’s something that really appeals to Pinky. All their vehicles are company owned and all their drivers are fiercely loyal to the company as well.

It comes as no surprise that the growth of Hawkins business throughout the years has mostly been mostly through word of mouth. That is something that stems from their roots almost a century ago and is a testament to their most important goal – Complete Customer Service.

Its like Pinky says, “We always aim to deliver more than we promise in order to provide our customers with excellent service.”

However as the light ran out so to did our time with Pinky and his new Western Star, because we had to make a detour a not far up the track. 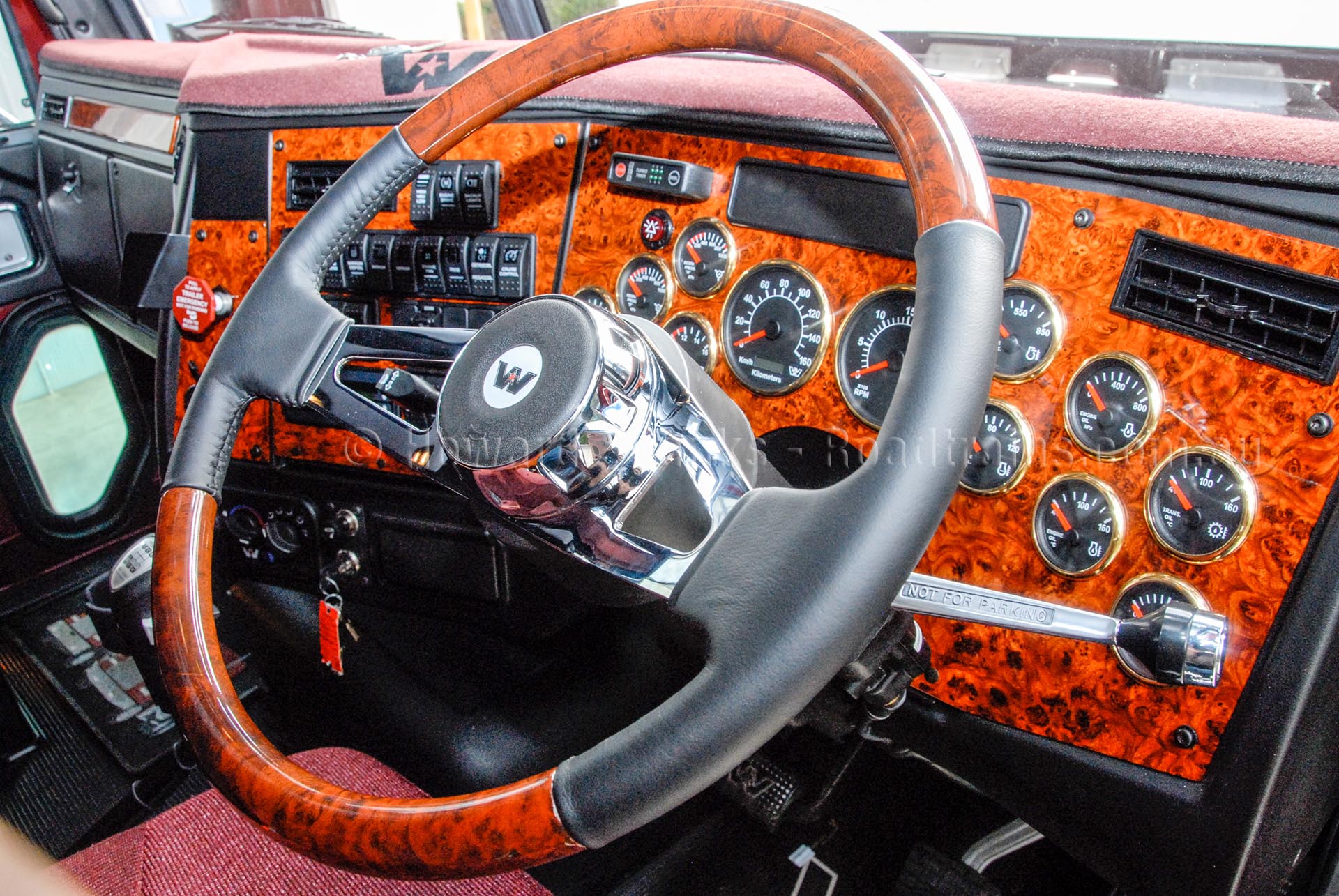