Cummins X15 Euro-6 Road Test. New emission regulations may be just around the corner, but Cummins and Kenworth are certainly getting ahead of the game with real world testing of their Euro-6 engines and models. Technical Editor Howard Shanks joined the Kenworth Safety Truck tour to experience the new high torque output of the Hummin’ Cummins under the hood of a T610. 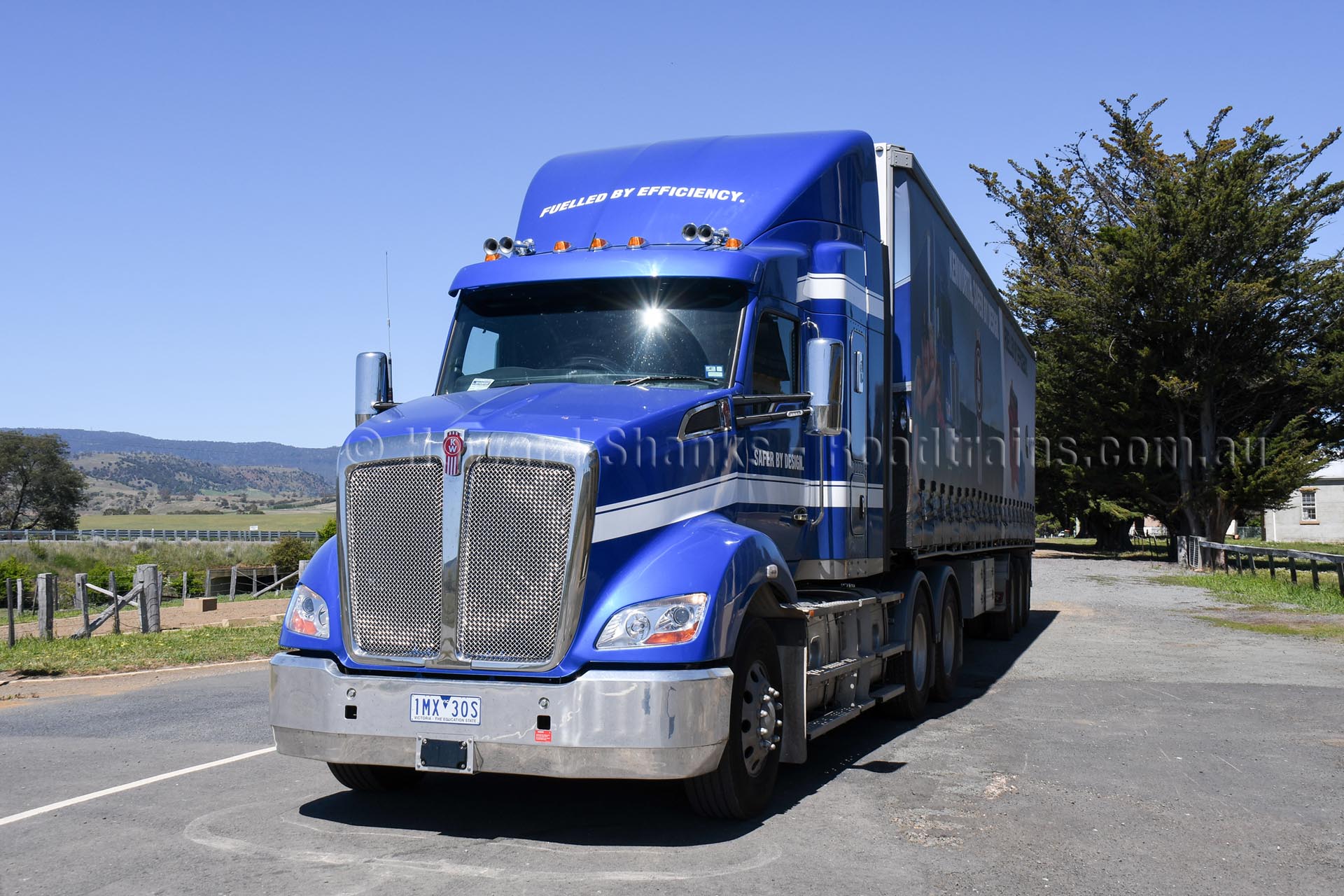 The smoko lady was closing her van doors at CJD Equipment’s Launceston depot as I climbed into the cabin of the blue T610, adjusted the ISRI seat, mirrors and steering wheel. I turned the key, the instrument lights all lit up, and a series of clicking sounds from behind the dash signalled the T610 was cycling through its own pre-start system check, then the Cummins X15 fired into life. I tapped the cruise control switch located on the right hand steering wheel spoke to engage fast idle, then turned on the pre-check light switch.

This pre-check light switch is a terrific tool as it cycles through all the truck’s external lights to enable drivers to thoroughly conduct their pre-trip light inspection quickly and effortlessly. It even activates the brake lights without the assistance of a second person.

By the time I returned to T610’s cabin both the needles in the air gauges indicated the system was fully charged air.

Before jotting a line next to the corresponding time in my workdiary, I scrolled through the driver information display menu to reset the driver score for the trip south to Hobart. Finally, I released the park brake, slipped the Cobra-shift lever into drive, eased on the accelerator and the T610 with its Freighter tautliner slowly wound its way through the dealership gate on to Westbury Road. 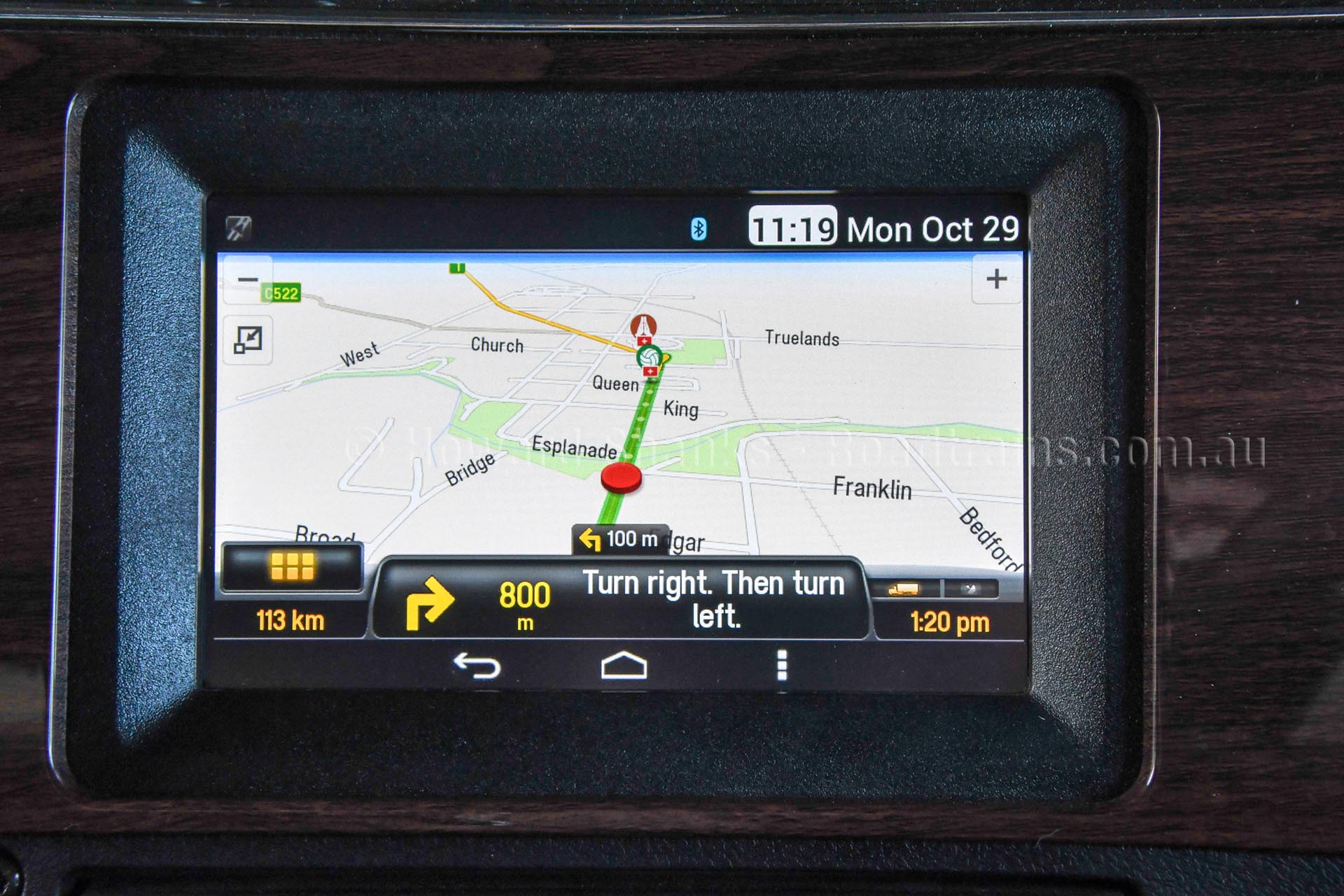 Out on the dual lane section of the Midland Highway heading to Perth (yes there is a Perth in Tasmania) I set the cruise control to 98kph and after a only a few kiilomters experienced my first coasting event, which covered almost one kilometre. Impressive! If you’re not familiar with how the Cummins X15 and Eaton UltraShift work together, it’s worth reading my article on Cummins ADEPT system. Basically, what happens is when the truck is on a downhill grade up to four percent, the internal electronic witchcraft in X15 and Ultrashift utilise the natural forces of the weight of the truck and downhill decent to save fuel. This is achieved by the transmission slipping the front section of the box into neutral and the engine dropping its’ RPM back to idle. When the truck slows or speeds up past the set speed parameters the transmission re-engages the gear and the engine revs return to the set cruising speed.

So here I was less than 20 kilometres into my journey and already the high-tech Kenworth had saved me a couple of kilometres in fuel burn. 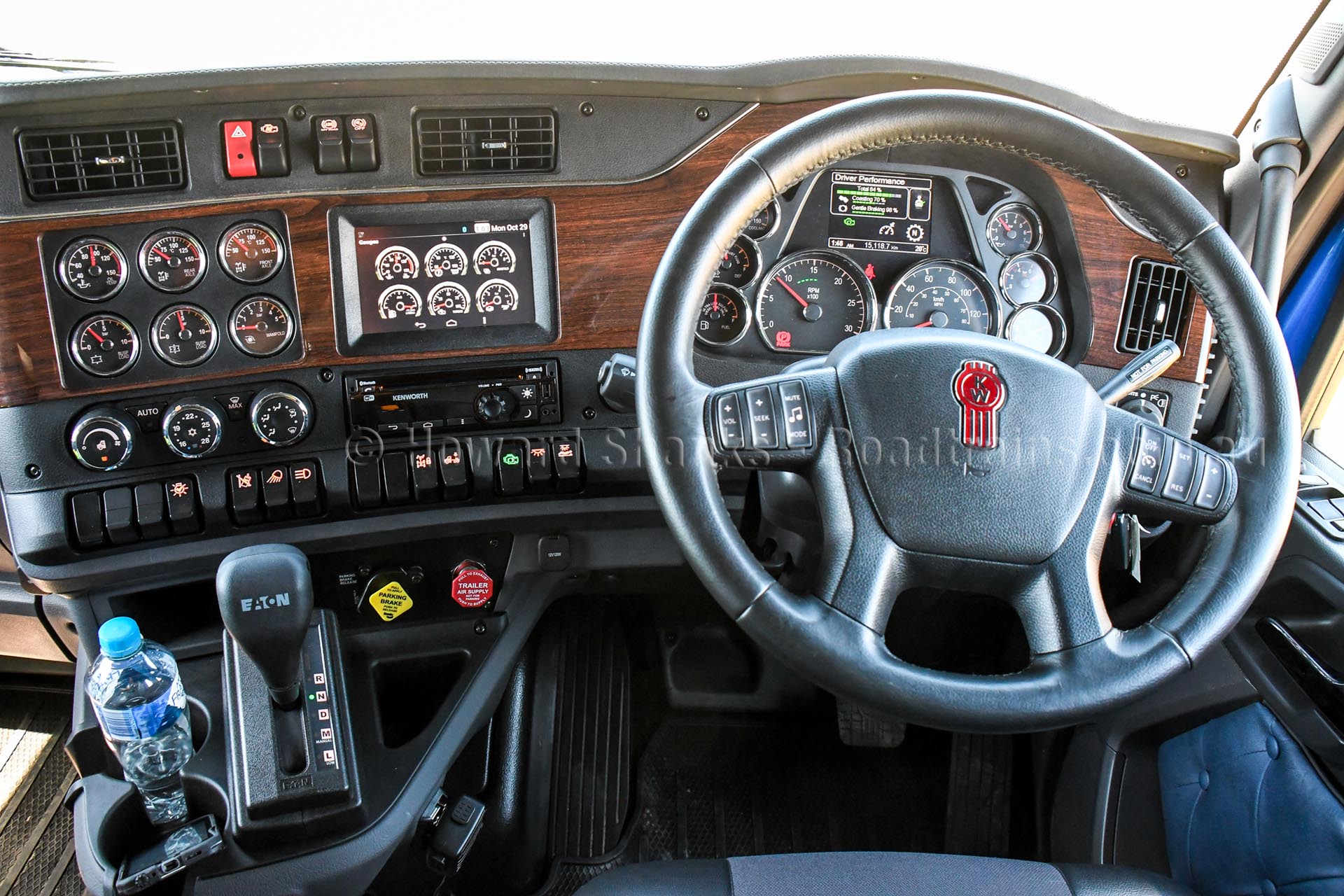 Rolling into Perth I eased off the throttle as the “80kph Ahead” sign loomed in the windscreen, by time I reached the 80KPH sign the truck had washed off enough speed without any brake application. With the CobraShift lever still in drive-mode I tapped the down shift button twice to prompt a down change as I rolled into the 60kph zone and the UltraShift did a nice quick two gear skip shift. How easy does this Ultrashift make the job, I’m sure I could get use to this in a hurry.

By the time I’d made it to the roadworks near Symmons Plains raceway not far out of Perth, I’d experienced several more coasting events. Before leaving CJD Equipment back in Launceston the Kenworth driver trainer had advised to try the ADEPT out at low speeds through the towns and even suggesting there would be a high possibly of achieving some coasting events through the long stretches of roadworks on the Midland Highway.

There is no time like the present. I tapped the minus button on the right spoke of the Smart-wheel and lowered the cruise speed to 58kph. The speed limit through the roadworks is 60kph and I needed to allow a 2kph gap for the coasting event to operate without going into an over-speed event. Sure enough on a slight downhill grade the green “N” appeared in the gear display and the engine revs dropped to 600RPM. WOW how cool is this?

The total journey from CJD Equipment’s Launceston dealership to their Hobart Dealership is 190 kilometres and the smarts in the Kenworth T610 had allowed me to coast for 34 of kilometres.

But the efficiency didn’t just end with Cummins’ Smart-coast and Smart-torque-2 features. This Kenworth T610 – dubbed the “Safety Truck” was running the new Euro-6 Cummins X-15 which takes advantage of what the engineers are calling “Down-Speeding”.

Essentially “Down-Speeding” is running much higher torque engines than we’re use to seeing with taller rear axle ratios to take advantage of lower RPM at cruise speeds to further maximise fuel economy.

At this stage, there are two engine families in Cummins Euro-6 development program. The X1 is labelled the “Efficiency Series” with power ratings up to 550hp/2050Ib-ft when matched with AMT transmissions only and optimised for down speeding. Conversely the X3 is known as the “Performance Series” with ratings above 600hp/2050lb-ft and can be coupled up to either the AMT or Manual transmissions for vocational applications such as Road-train, Heavy Haulage or customer preference for traditional powertrains.

Importantly Cummins say there is no EGR planned for the new Euro-6 engines and they are comfortably meeting the emission requirements with the aid of a wastegated turbocharger and slight increase in the adblue dose. 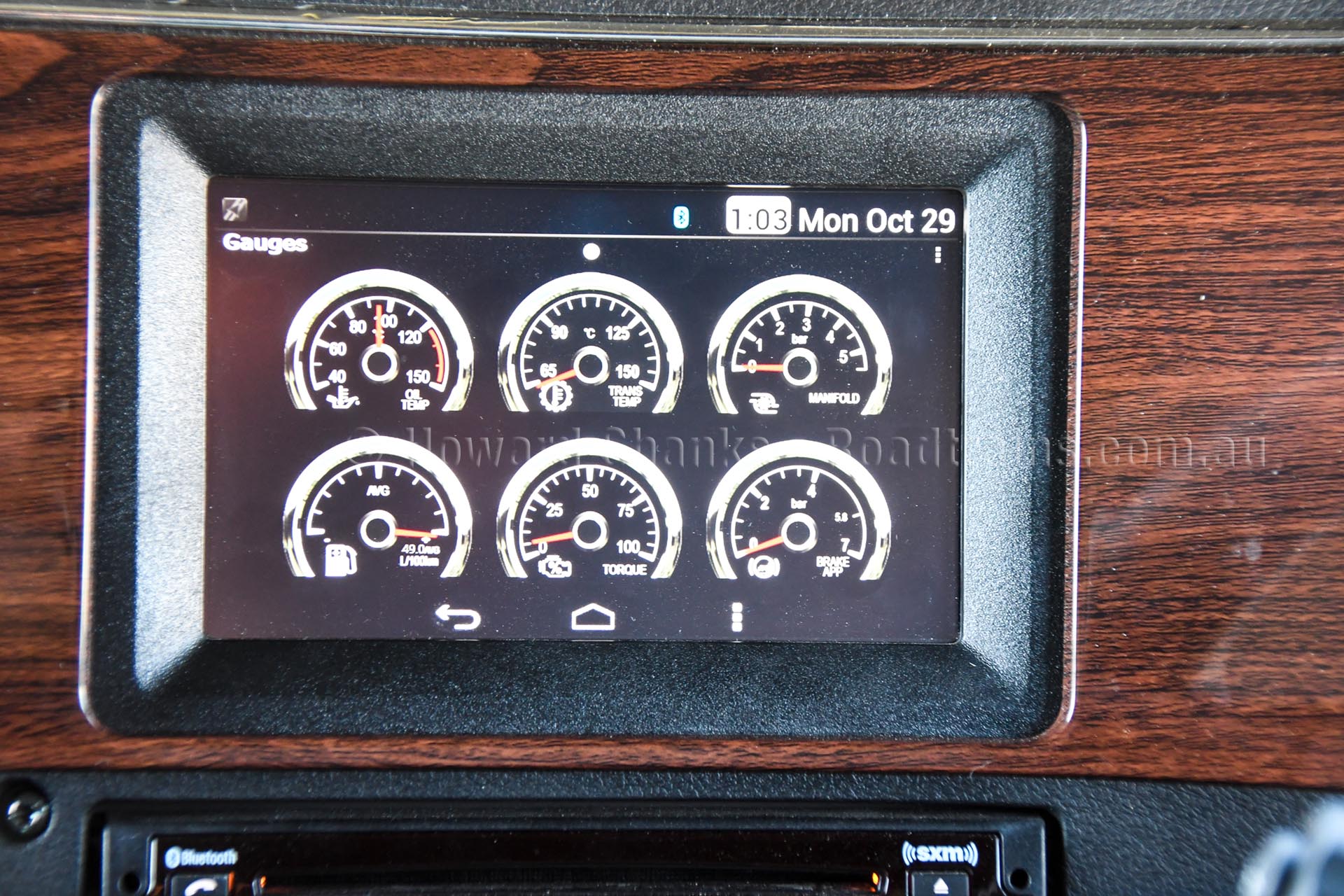 In order to transmit the increased torque from the transmission to the rear axles Dana have introduced a compact series tailshaft called the “Super Duty 300” or SD300 for short. The SD300 can handle torque loads up to 22,100 lb-ft, a significant step up from the industry standard SPL250 which has maximum torque load of 18,400 lb-ft.

Under the hood of the T610 safety truck is the Cummins X15 engine in the X1 Euro-6 spec rated at 550HP punching out 2050 lb-ft torque which is connected to an Eaton Ultrashift Plus FO-22E318B-MXP 18-speed. As stated earlier power is transmitted through Dana’s latest SD300 driveline to Dana 46-170 rear axles with a 3.73:1 ratio. This means that the engine is running at 1411RPM when cruising at 100kph.

The T610 is cruising right in the sweet spot. In fact, the big-hearted Cummins is making over 1800 lb-ft torque at 1000RPM and ramps it up to 2050 lb-ft at 1250 RPM right through to 1550 RPM with the torque falling to 1850 lb-ft at 1800 RPM.  What all those numbers indicate is the Cummins X15 is producing significant torque all the way through its operating engine range giving over an 800 RPM range where the engine is delivering over 1800 lb-ft of useable torque. 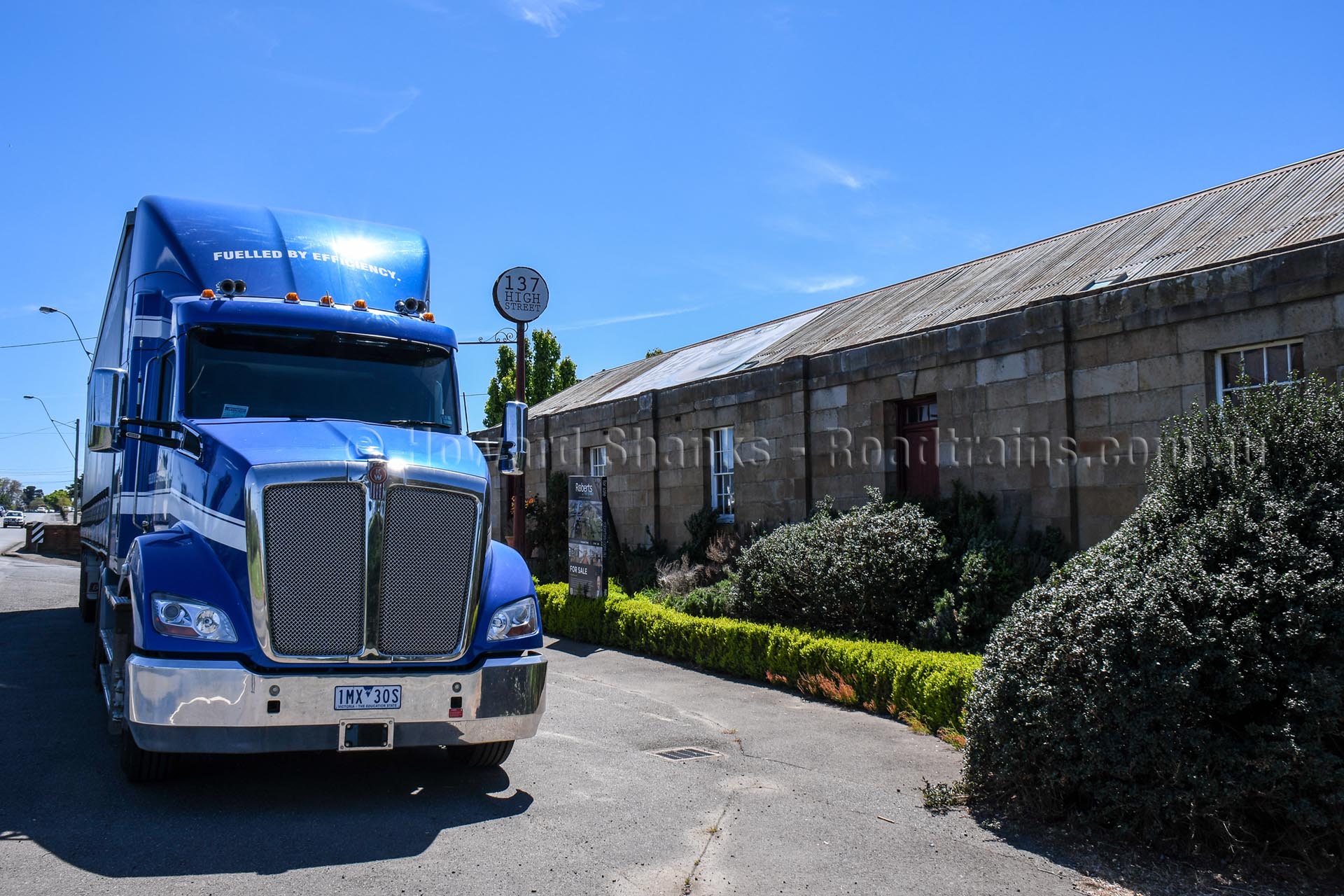 Eaton had loaded a purpose built shift file into this T610 that is designed to improve drivability, efficiency without compromising performance. Consequently, shifts typically occur in the engine’s maximum torque range of 1100 – 1500 RPM. Meantime full throttle upshifts from 12th, 13th and 14th occur at 1575RPM and drop back to 1550RPM from 15th – 18th gear. The shift calibration in this truck is very sensitive to changes in grade and will automatically downshift on grades greater than 3.5 percent to maximise speed.

The smarts inside the Ultrashift Plus are extremely clever. For instance, as the transmission detects an increase in the grade percentage it uses higher revs before initiating a gear change. Meantime the commands from the driver on the accelerator position also influence when a gear change will take place, a high throttle position mean the transmission will initiate an up change higher in the RPM. While this is great if you’re climbing a hill, it can also work against you if you’re launching the truck hard off the mark and chasing economy. 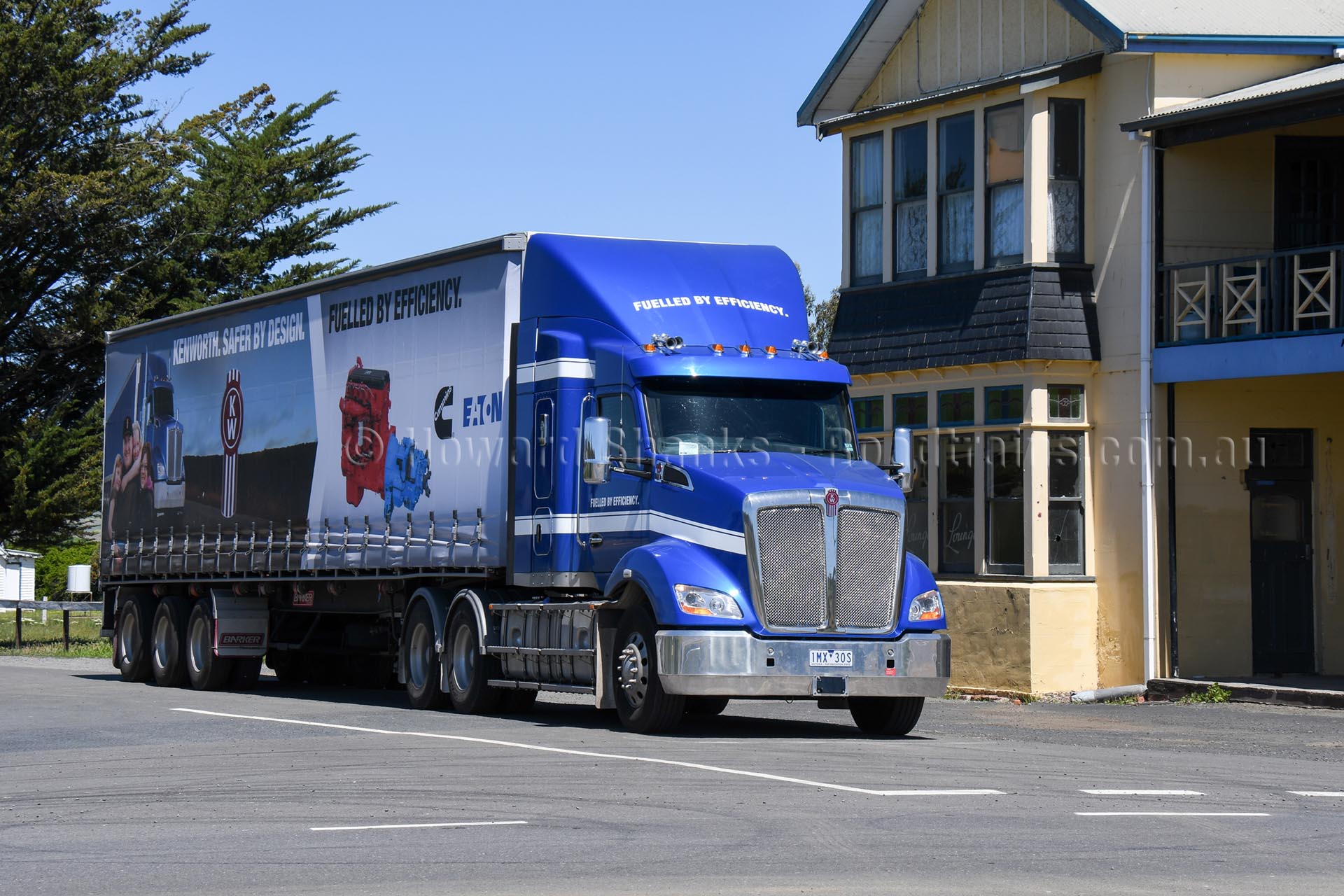 Eaton suggest to get the best economy and performance from the Ultrashift Plus transmission, to use the power only as required, to avoid sudden speed changes and try to keep the wheels rolling when approaching intersections.

From a performance point, the T610 Safety Truck marched along the Midland highway from the top of the state to the bottom effortlessly. When it comes to power and torque the Cummins delivers huge Clydesdale horsepower, not Shetland ponies like other engines. The trip time from Launceston to Hobart was the essentially the same as you’d expect to get from a current model but the most significant difference was at the fuel bowser where we achieve exceptional economy in the very high two kilometres per litre. On the return leg, the economy was even better, but more on that in the second part of the T610 Safety Truck road test.