The impending wet season was threatening to break early, yet for freight companies like Carpentaria Fuels getting the essential commodities like food and fuel into remote communities is often a huge challenge at the best of time as Howard Shanks discovered when he hitched a ride in their Kenworth C5 in a race against the rain to deliver one last load of fuel before the roads were closed.

Karumba, in northwest Queensland, is little more than a fishing village that’s located on the banks of the Norman River. The rumble of a forklift loading bags of fertiliser at dawn signalled the started of the day. 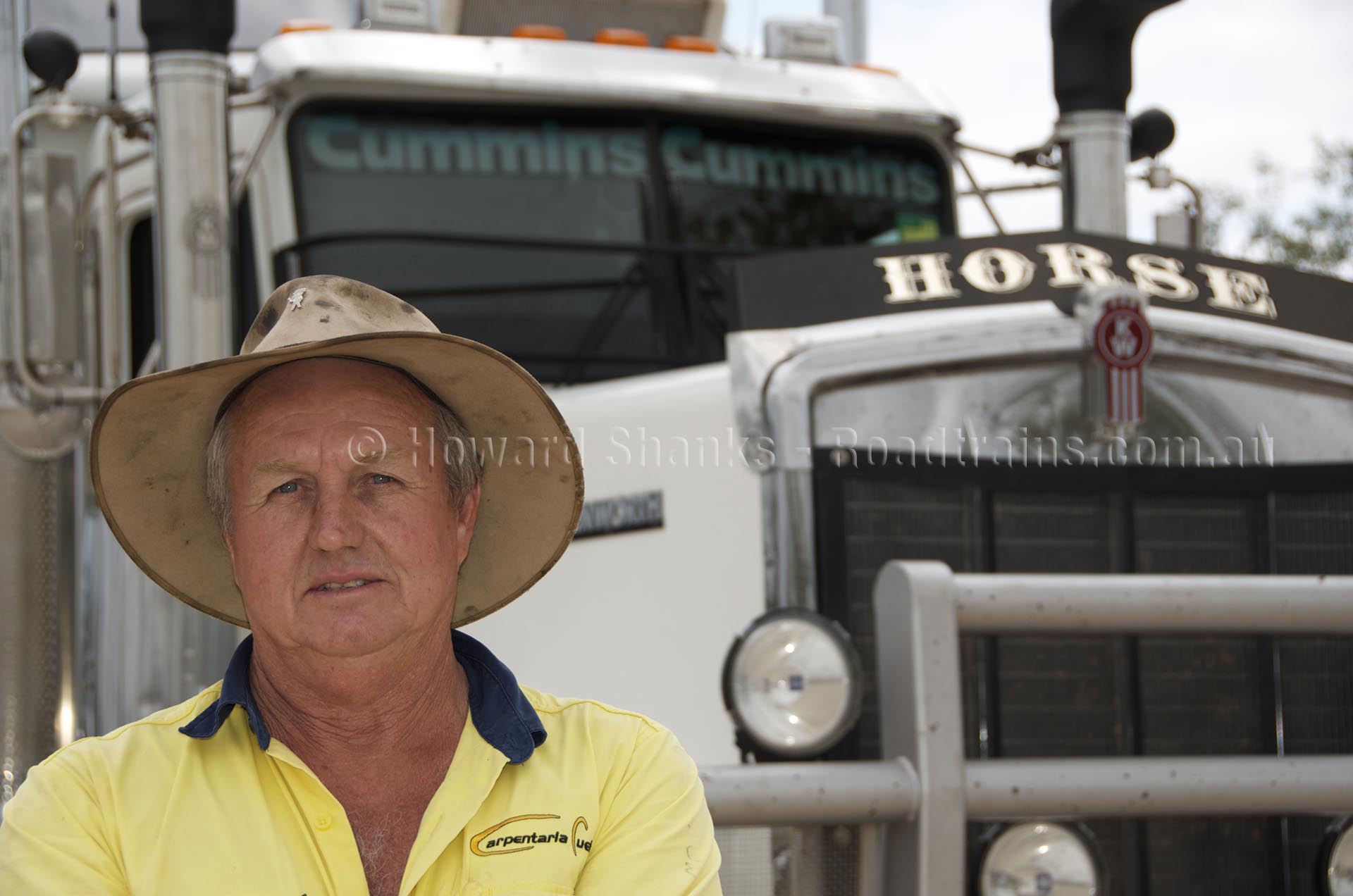 We’d arrived the night before to catch up with Carpentaria Fuels, Richard Philp who had offered to take us on a run in his Kenworth C5 to deliver over 100,000 liters fuel in his triple roadtrain way out west of Bourketown.

Richard didn’t waste anytime getting the Kenworth roadtrain rolling either, as he had to load his two rear trailers from the depot around the corner with fuel that had arrived during the night.

He told us that if the rain that was forecast for later in the week arrived as predicted it could well be his last load of fuel into that area until the wet season was over next year.

In the brooding weeks leading up to the wet season its always a challenging time for operators in the remote tropical north of the continent. 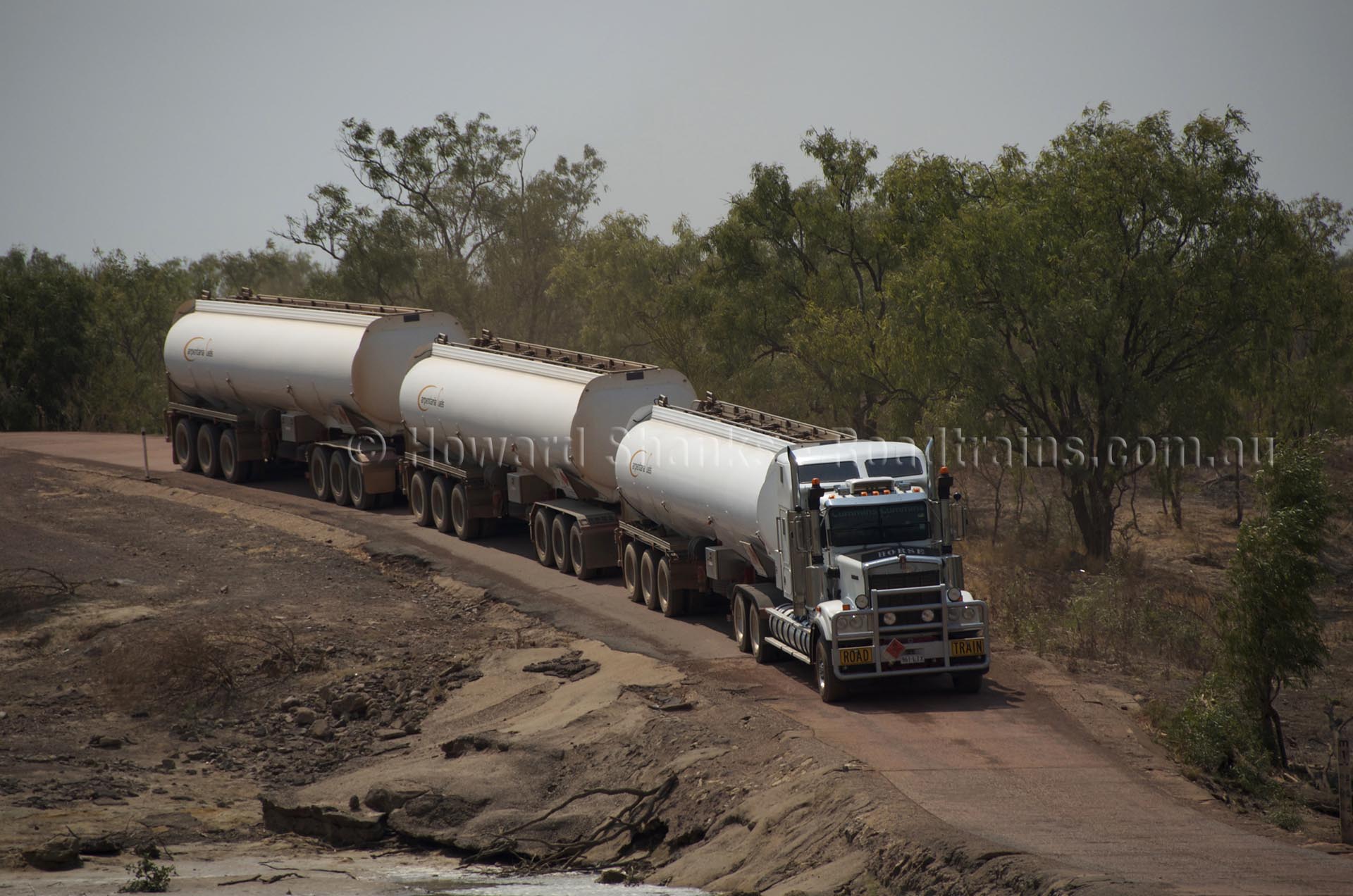 Richard gently idled the big Kenworth into the depot and guided it under the gantry ready to load the fuel. The depot has been well laid out with easy drive through access for triple roadtrains.

An hour or so after pulling under the gantry Richard had one hundred thousand  litres of fuel loaded into his roadtrain and the paperwork completed.

Its probably worth noting just how long the wheelbase of this Cummins powered Kenworth is too, at 6.75 meters its one of the longest wheelbases that Kenworth make for prime-mover applications.

Richard told us that they specify the long wheelbase for a number of reasons such as the improved ride on the rough corrugated roads and the ability to carry 2500 litres of diesel for the Kenworth prime-mover. Then there is the added storage space in the robust lockers behind the cabin, which are essential for carrying spares when operating in these conditions. 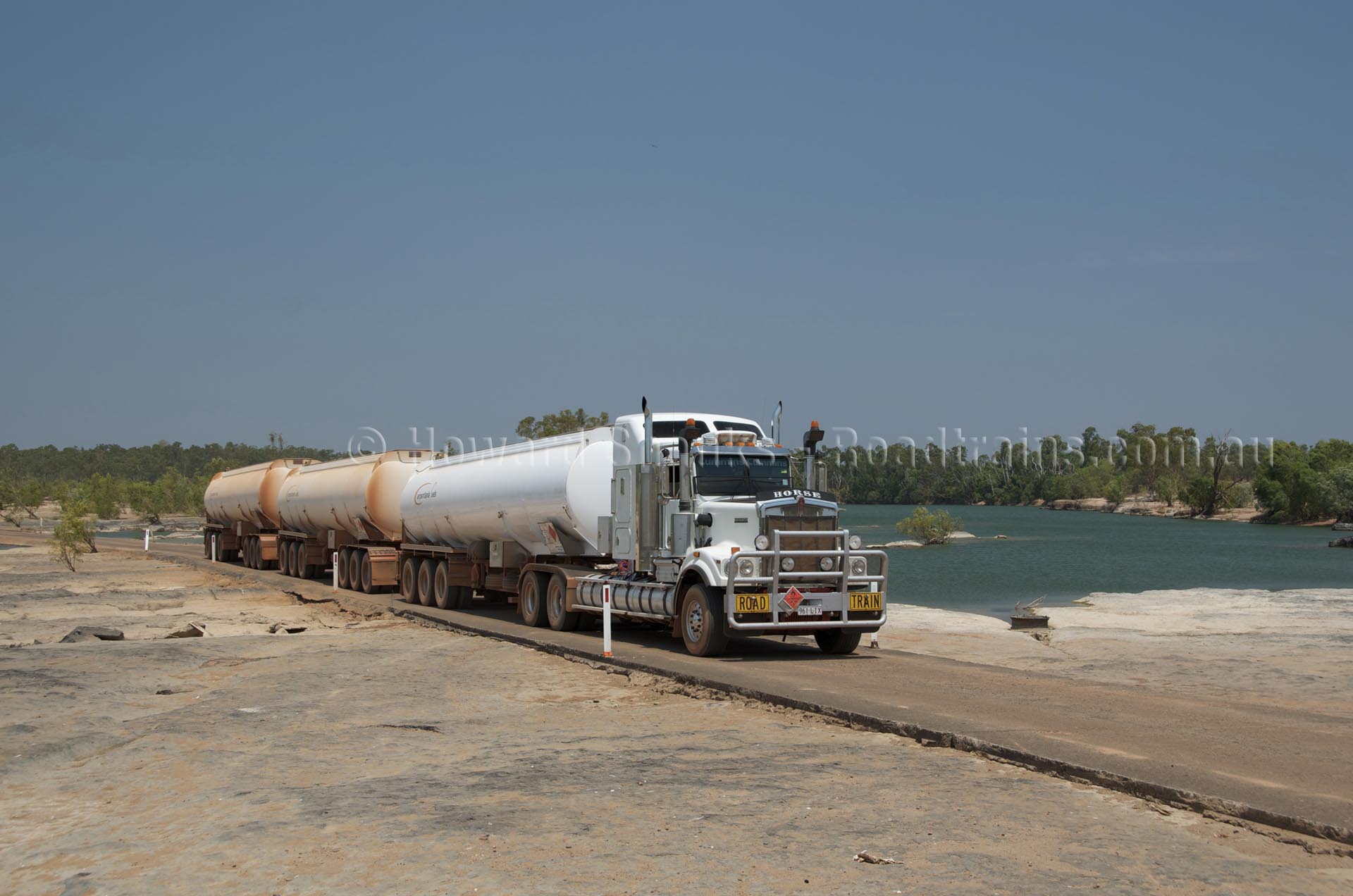 It didn’t take Richard long to weave his way out of town and get the big Kenworth C5 motoring along the Karumba Development Road towards Normanton.

Richard told us that today it’d take us a little over an hour to get to Normanton, however during the big floods last wet season it was taking over eight hours in Carpentaria’s barge the “Torres Venture” to do the same journey with essential supplies because the Norman River was so heavily flooded.

A few kilometers out of Normanton Richard eases off the throttle again and makes a right hand turn onto the Savannah Way, which forms part of the National Route 1 Highway, that circumnavigates the Australian continent.

We were heading to Burketown where Richard would make another right hand turn and head further west to deliver the three trailers of fuel. He wasted little time and kept pushing on as he was hoping to unloaded them before nightfall. 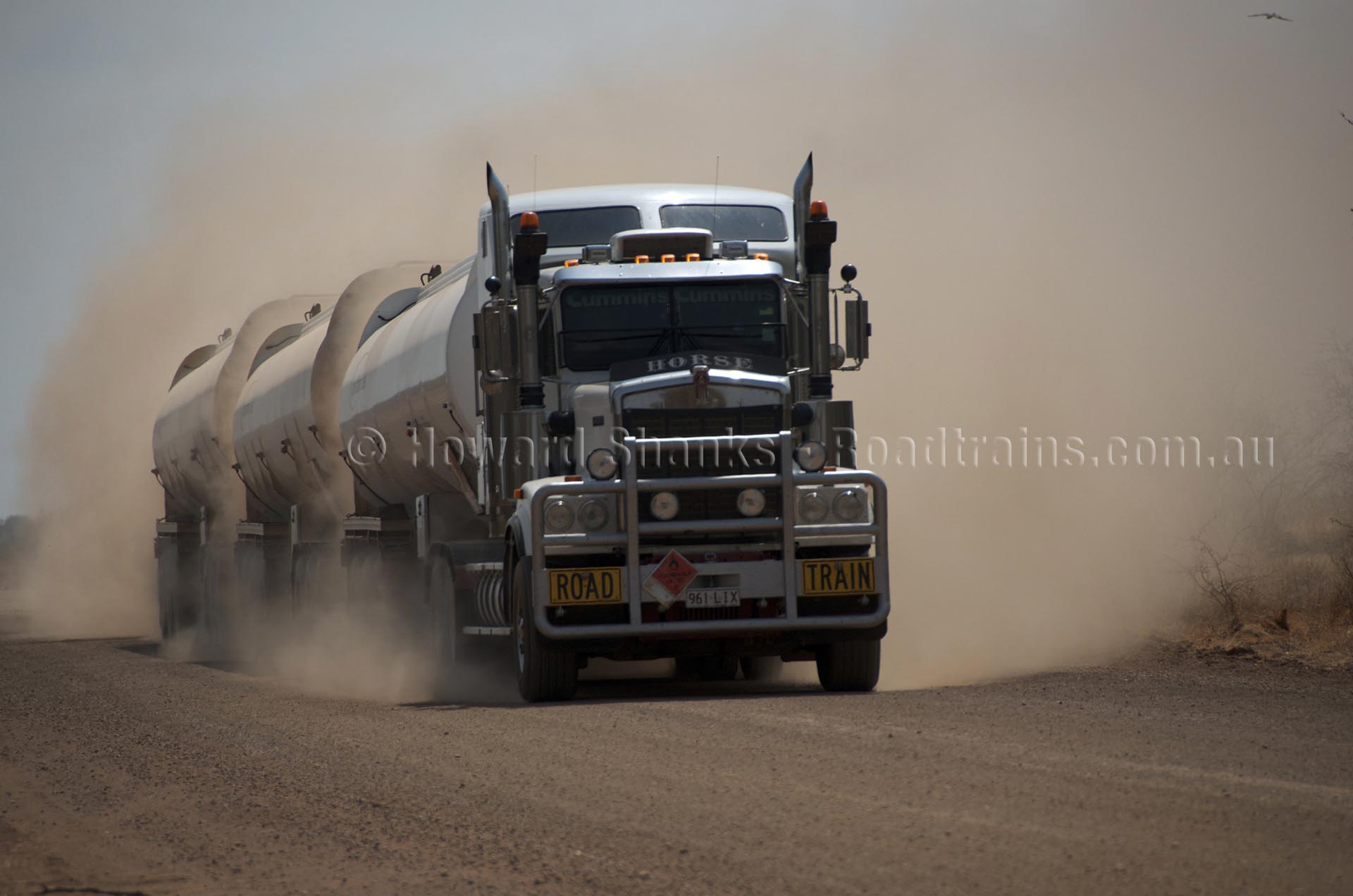 That smooth bitumen soon gave way to a bone jarring corrugated dirt track that runs for over 200 kilometers.

Richard reckons that these robust Kenworth C5s are the only truck that will stand up to the constant pounding day in day that you get in the remote northwest.

It’s around this country that the ill-fated Burke and Wills made their most northerly camp, Camp 119. On their way north, the weather had been hot and dry, however on the return journey the wet season broke and the tropical monsoonal rains began making passage impossible. A similar fate that could affect Richard on this trip.

Mile after mile, in and out of creek crossing after creek crossing Richard kept pressing on. Thankfully today it was dry and the dust was fairly bellowing from behind the trailers.

A couple of hours after leaving Normanton Richard pulled over and walked around the roadtrain checking his tyres and wheel bearings. 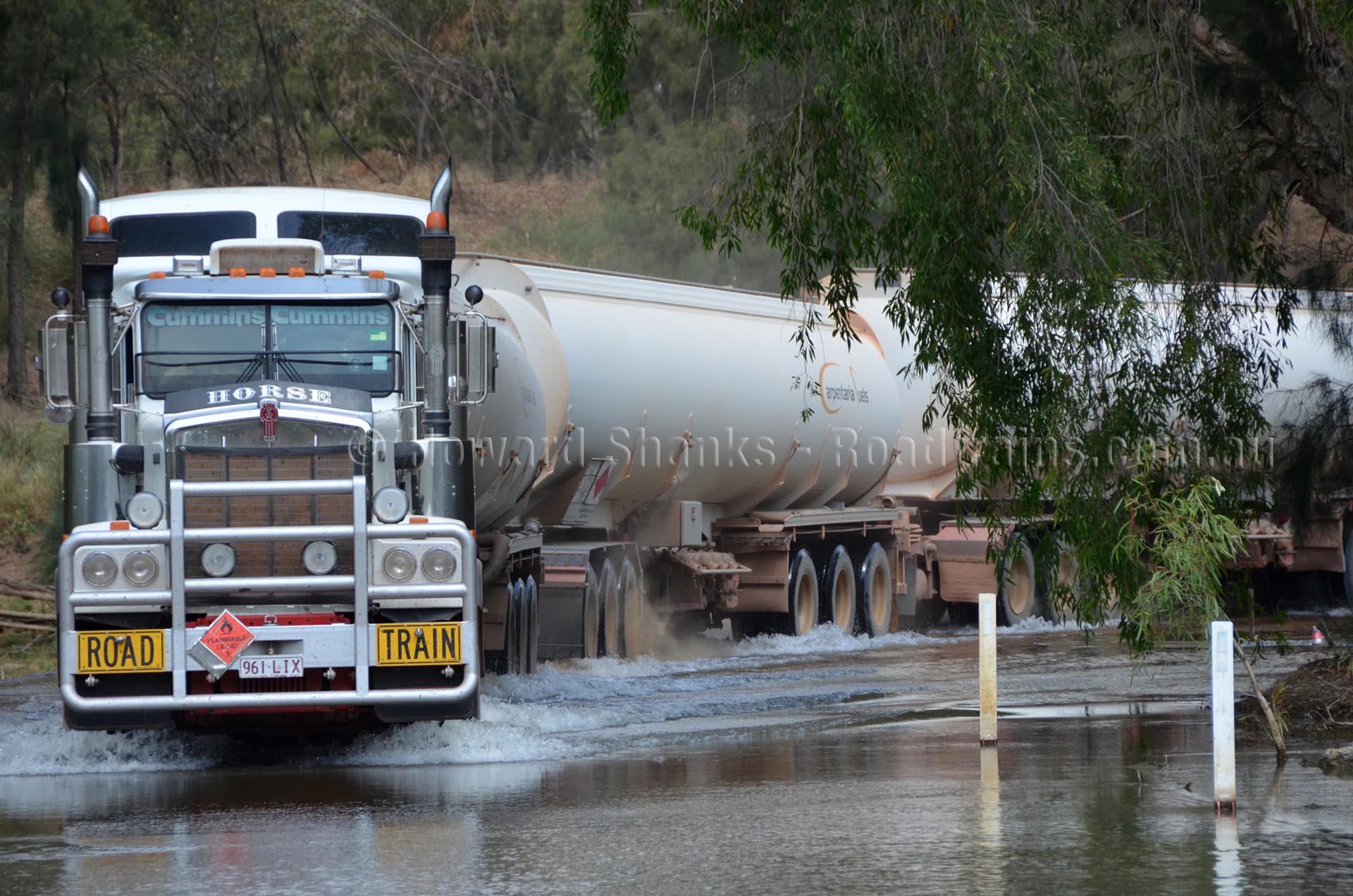 There’s some spectacular river crossings on this route that bend and snake their way along the riverbed. Before he enters one of these crossings he calls a warning on his UHF radio to ensure there are no other vehicles on the crossing or entering from the other side.

Its sweltering hot this time of year and you can almost see the heat.

Finally, Richard ambled into Burketown, which is located on the Albert River, and consequently known as the Barra fishing capital because of its terrific fishing.

Not far out of town the bitumen once again gives way to the dirt track. Then in the middle of nowhere there’s a section of smooth bitumen and Richard makes the most of the smooth running for a while before he drops down into the spectacular Nicholson River crossing.  It’s not far past this river crossing where Richard will unload the fuel…

It was just on dusk when Richard retuned and guided his now empty roadtrain back down into the Nicholson River crossing, thankful that he’d be able to unload this afternoon. 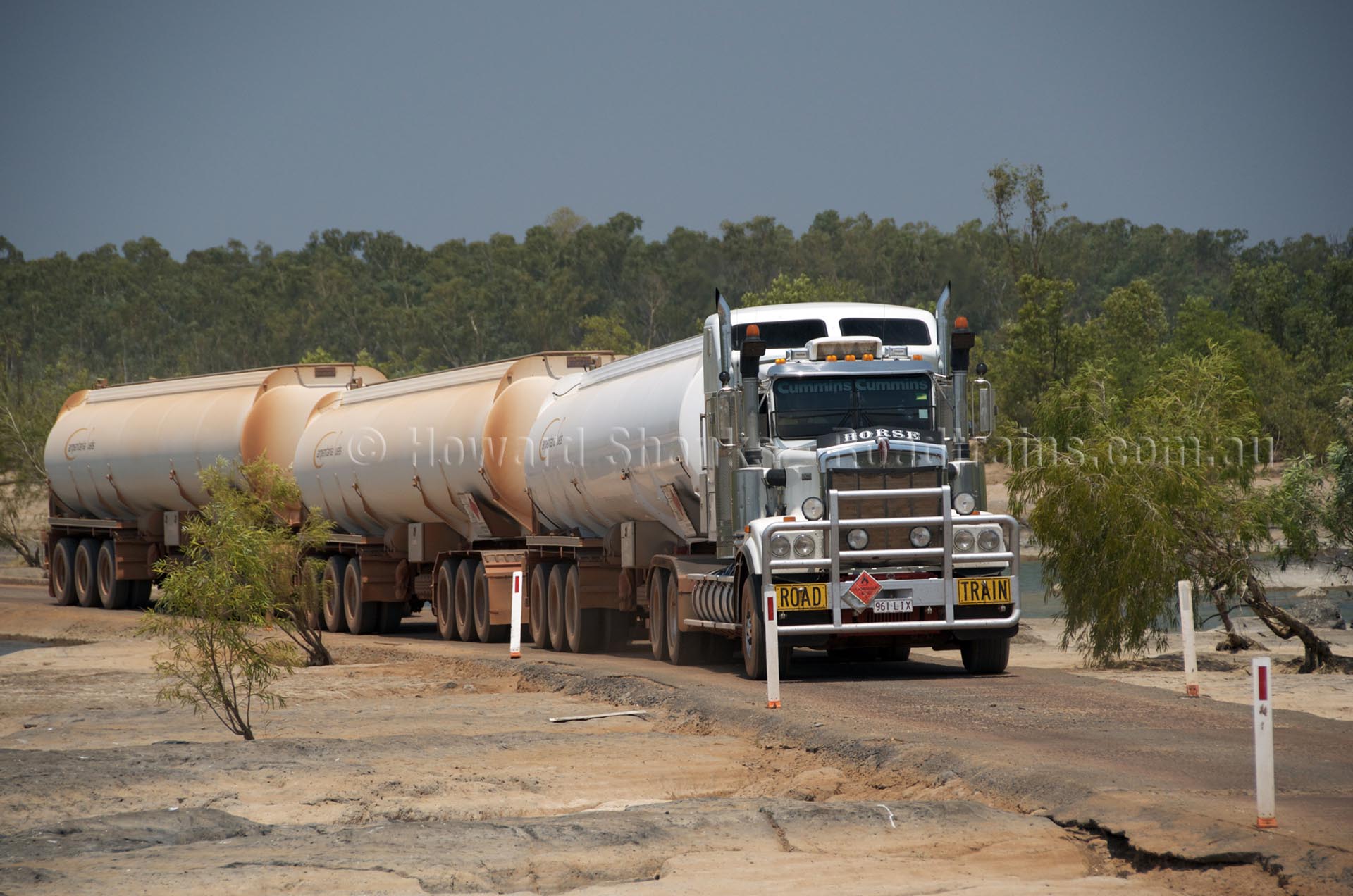 Meanwhile, it was well after dark when he made it back to the causeway with the water flowing over it.  Richard told us he knew of parking bay not too far up the road where we’d camp for the night.

Early the next morning an eerie haze hung gingerly in the dawn sky. We heard on the UHF radio that lightening strikes during the night had started a few fires.

Meanwhile some dark clouds off on the horizon looked threating which was causing Richard some concern. He even reiterated how happy he was to have unloaded yesterday.

Then not too far down the road Richard came across a cattle trailer that had caught fire during the night and he pulled over to check it out.

He told us that is why he stops regularly to check his wheel-bearings and tyres so that he can prevent an accident such as this. After a quick look, he climbed back in the cabin and pressed onwards. 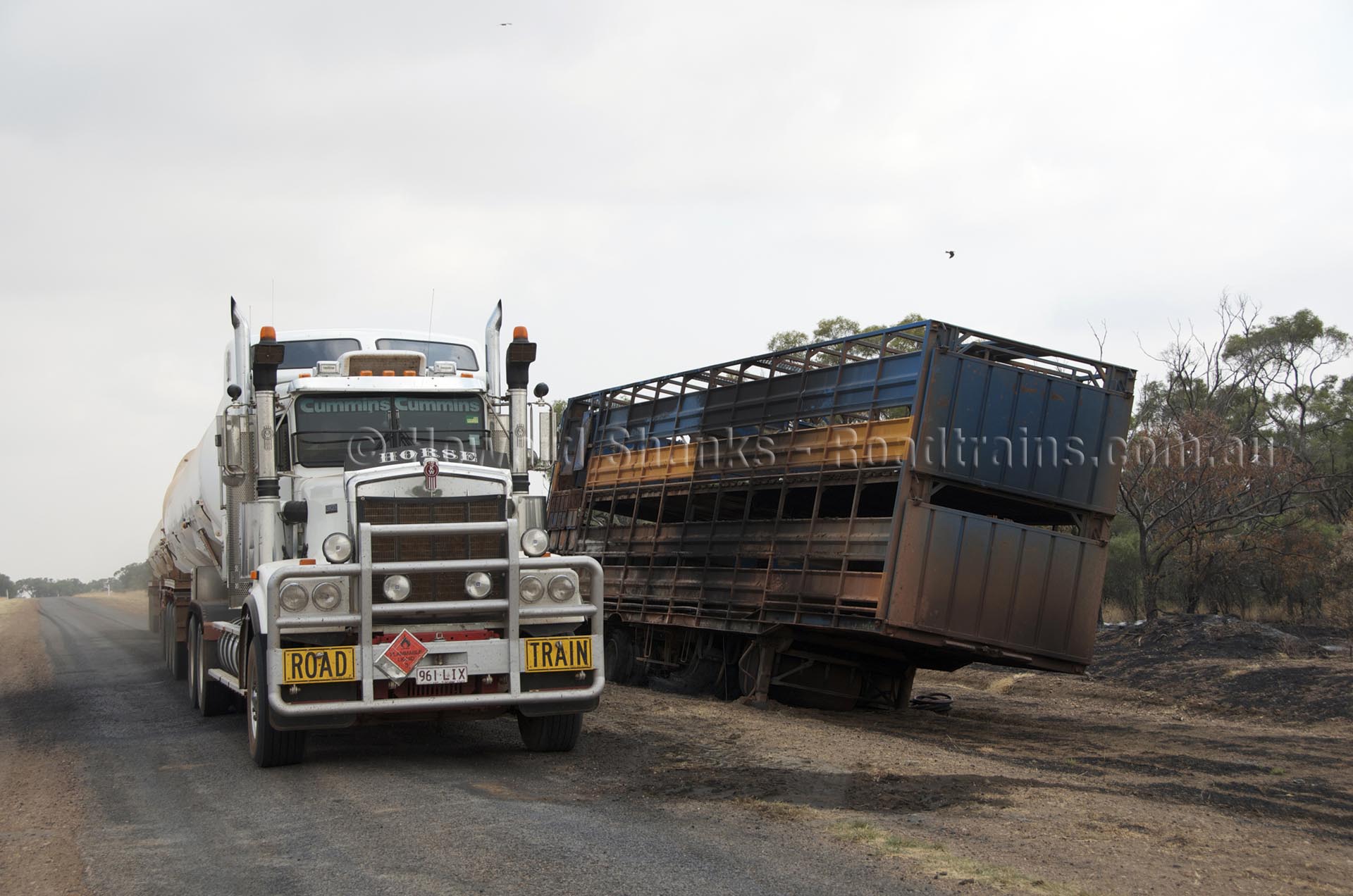 Richard admits he is more than impressed with the reliability of his Kenworth C5 and equally impressed with the power and reliability he get from the 600 horsepower Cummins and 18-speed Roadranger. Meantime he adds that the back service he gets from Brown and Hurley’s Townsville dealership is first class. He’s running the Kenworth Big-Six 6-Rod suspension with Meritor RT52-185 rear axles, which are the preferred speck up in the Gulf country.

Richard added that it’s also worth sticking your head under the bonnet and checking out the rugged front end which is something that you’ll only see on these more ruggedly specked C5’s and that is the 8.2 tonne Kenworth slipper spring and which boasts Metror’s heavy MFS73LA front axle.

He told us that when he is on the dirt tracks, that the heavy-duty front ends really comes into its own. 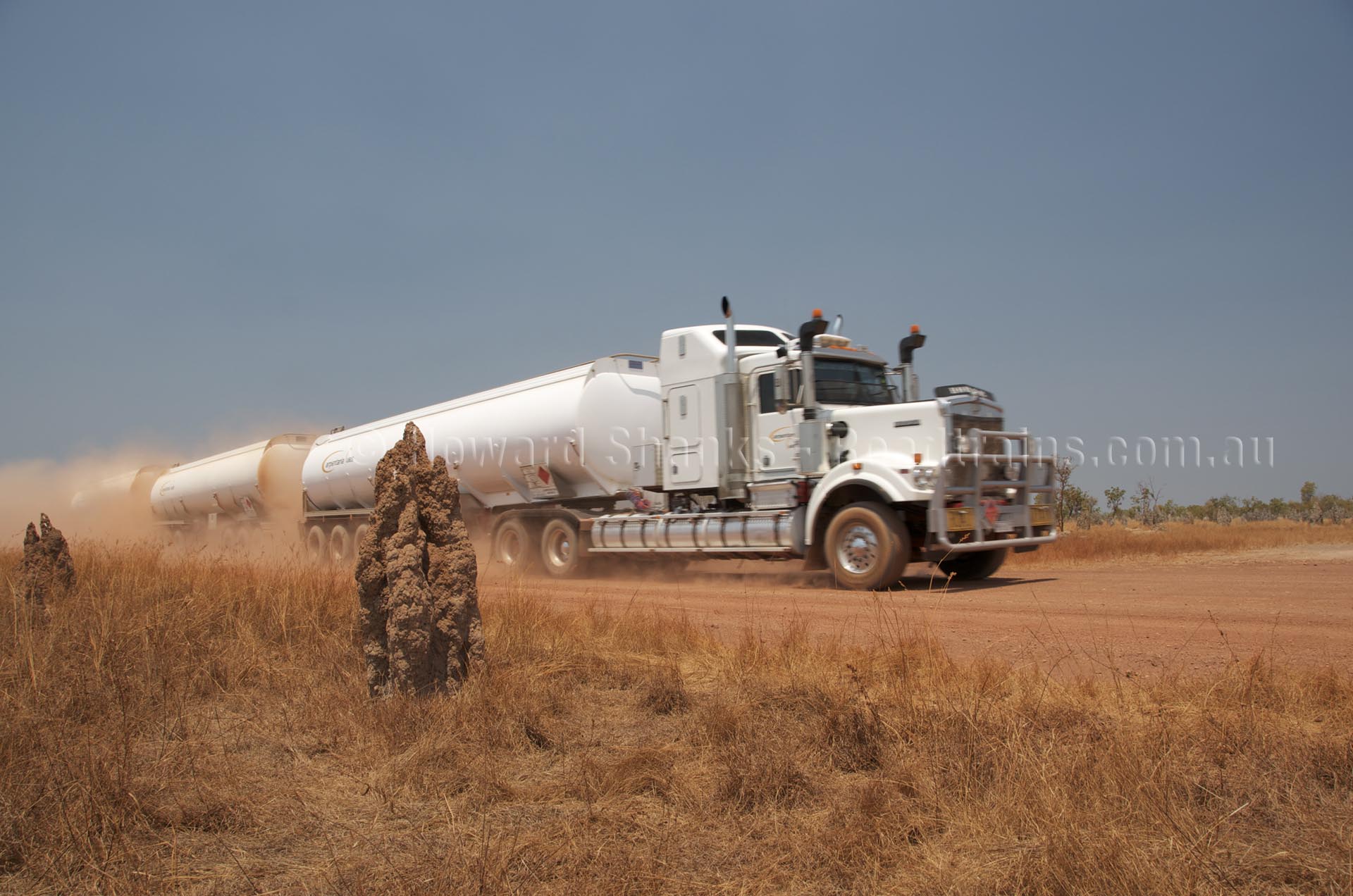 “It certainly makes the truck very sure footed,” Richard emphasized. The beefed up cross-brace keeps the whole front of truck rigid too. Combine that with the two track rods, which fix the axle in position and the C5 has very good road handling even on the roughest tracks out here.”

Finally a day and a half after leaving Karumba he veers left onto the Flinders Highway near Julia Creek.

Those dark clouds from earlier this morning were now even more threatening. Half an hour later the thunder rumbled and lightening cracked then down came the rain with vengeance.

“You can see why they call it the wet season,” Richard said.

That rain sure came bucketing down.

“Hopefully the rain will put out that fire the lightening had started earlier,” Richard added.

Yet here in the blinding rain and failing light on the side of the Flinders Highway is where we had to leave Richard and tough Kenworth C5. 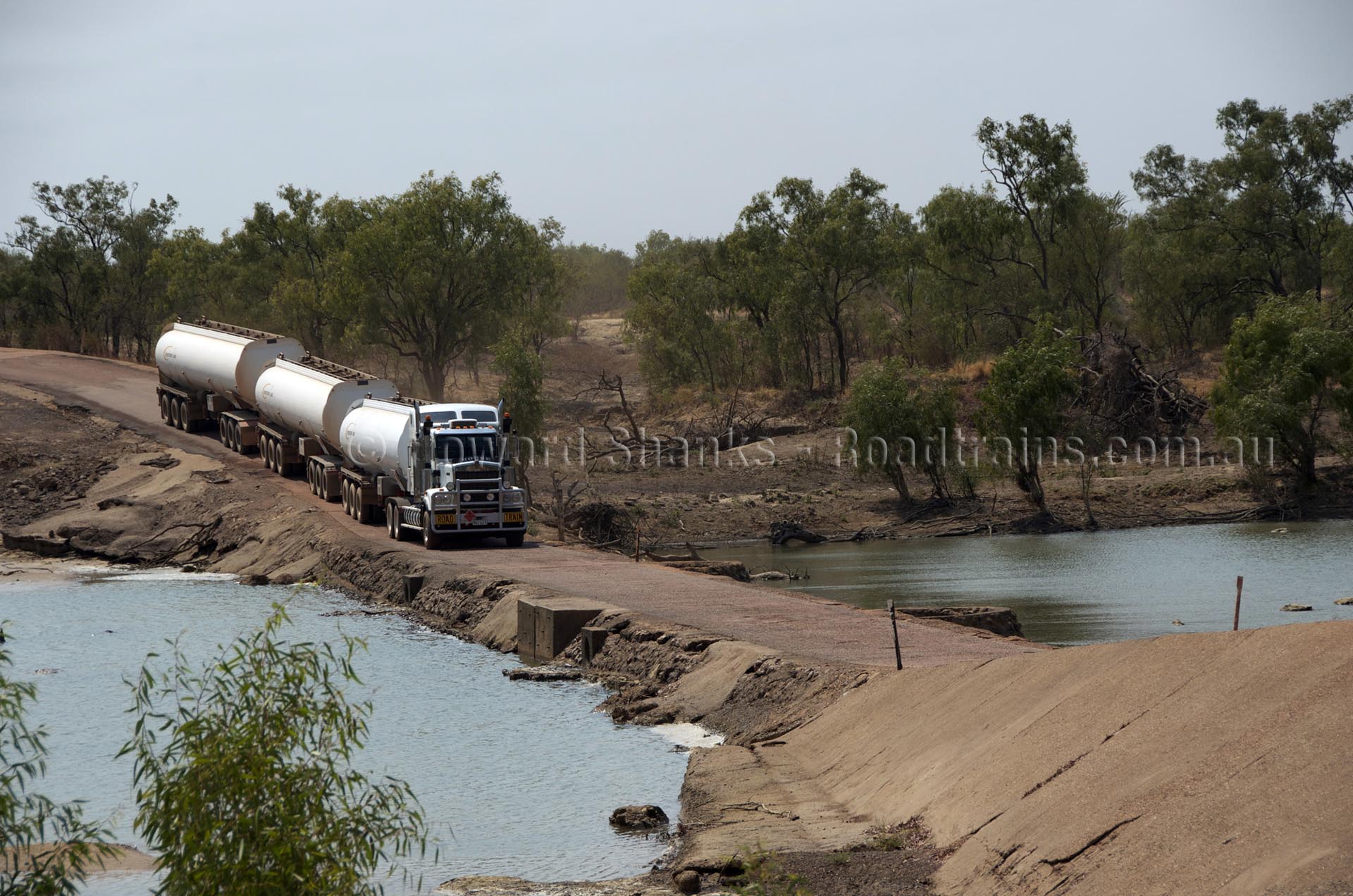