Words and photography by Howard Shanks. 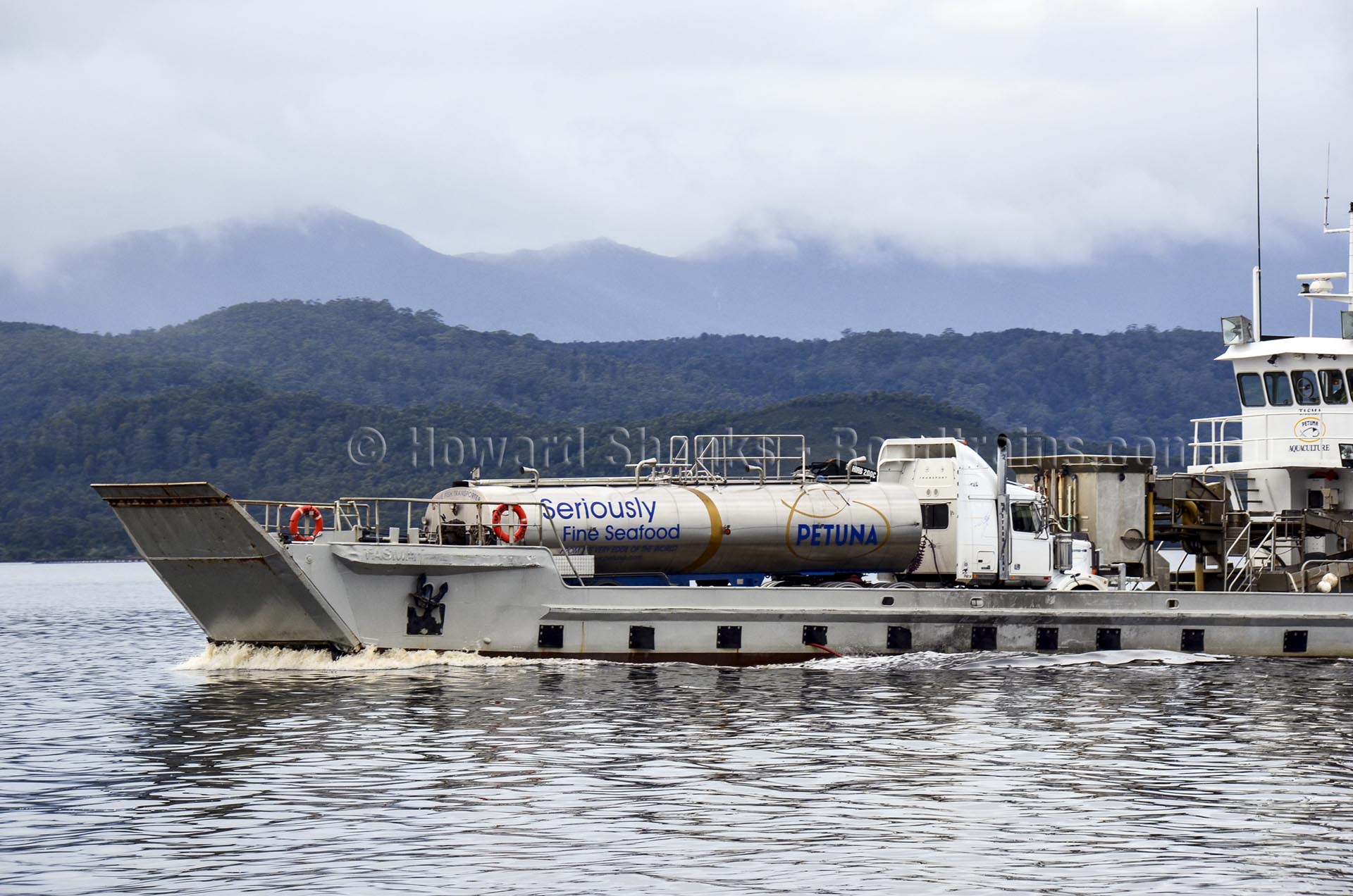 Based on the picturesque Tasmanian North Coast, G&D Transport relies on old-fashioned values, the adoption of new technologies and proven reliability of Western Trucks and Detroit engines to stay ahead of the pack.

From their Devonport depot, G&D Transport run a diverse trucking operation from site clearing, scrap metal, stock feed, to Aquaculture transport. They are even accredited demolition contractors. The affable yet fiercely determined Tony Dike, Business Development Manager, is the “D” in the G&D Transport. He smiles as he introduces his right hand man Alan “Tiger” Holden who is the company’s transport coordinator, “Tiger will look after you over the next few days and he’ll make all the arrangements for you to get on the barge down in Strahan.”

By his own admission, the road for G& D Transport has at times been rocky but with no shortage of perseverance and a desire to set their own course rather than follow the paths of others, general freight loads diminished as demand for their speacilised live fish transport grew.

Easily stressed and far more vulnerable to climate conditions than any other animal, Tony confirms that the Aquaculture Industry demand particularly high standards of care during transport to ensure animal welfare and overall meat quality. Consequently, trailers purposefully modified for fish transport coupled with strict adherence to cleanliness and maintenance standards are paramount in keeping the customers satisfied. 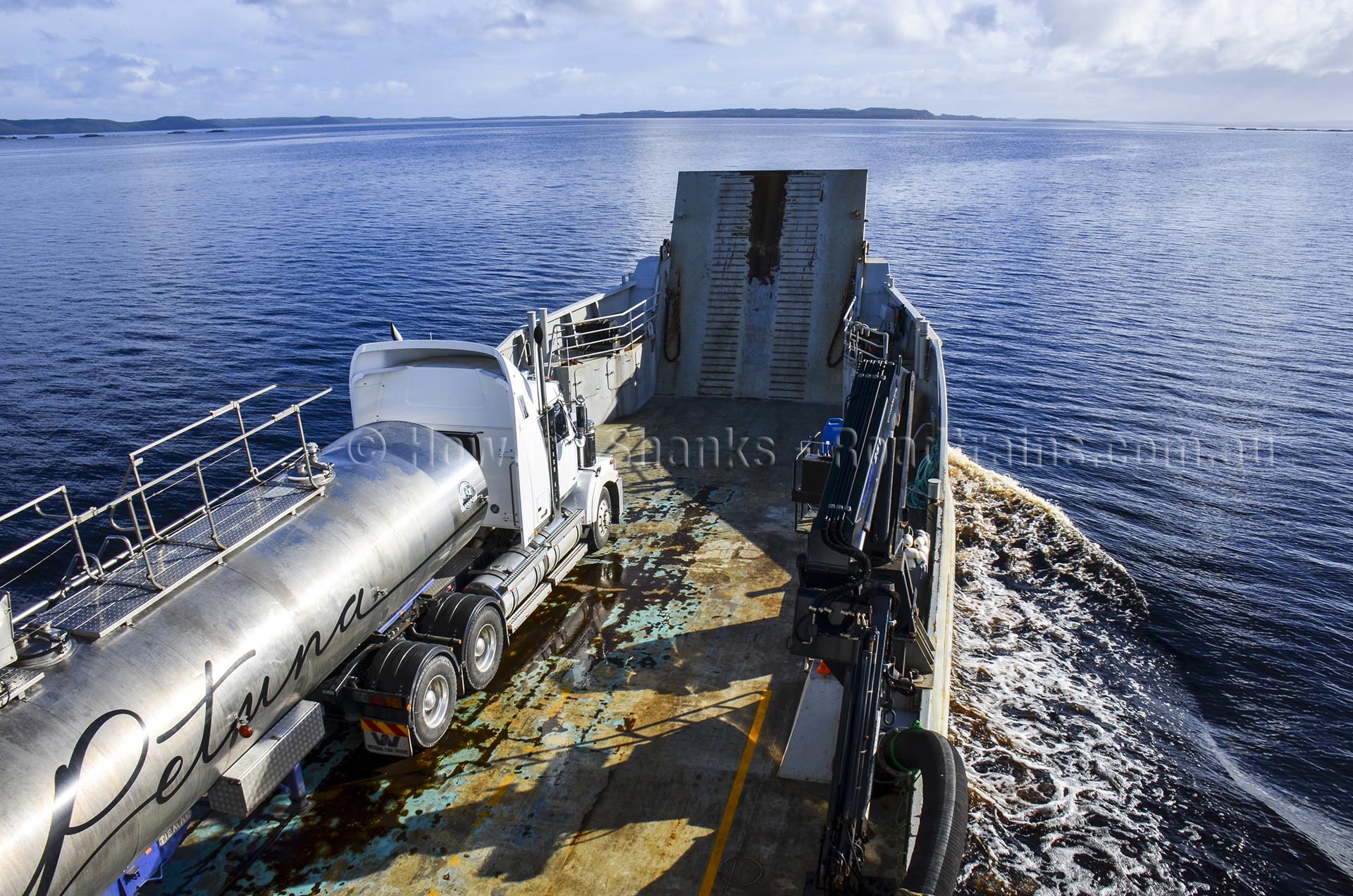 “When we have the live-fish on board we need to be extremely reliable,” Tony added. “On the journey from the fish hatchery to pens in Macquarie Harbour we have to stop at regular intervals to measure the water temperature and ensure the oxygen is aerating the water in the tanker. Its important not to stress the fish.”

Outside a bitterly cold southerly wind pounded huge raindrops against the office windows as Tiger introduced himself. “Hauling fish comes with its own issues. It’s different in heaps of ways to any other freight.” Tiger begins. “It’s probably not for everyone and we certainly didn’t set out with a vision to speacilise in fish transport, but we could see the potential in it as the world wide demand on Tasmania’s Aquaculture industries grows. We work damn hard to make it work too, however like most things in transport, it s a job that still comes with competitive pressures.”

“That’s why we’ve specified these new Detroit powered Western Star 4800 trucks for our Aquaculture operation,” Tiger revealed. Traditionally our trucks are always purchased new and generally kept for about five years. By then they’ve clocked up between 750,000 and 800,000 kilometers at that time we either trade or sell them privately.”

“The terrain here in Tasmania is very demanding on a truck especially down on the West Coast where there are numerous long steep climbs and descents,” Tiger continued. “We need a truck that has plenty of power for those long pulls, a decent engine brake and something that will deliver good reliability with maximum economy. When Phil Salter from West Star Trucks suggested the Detroit powered 4800 would fit the bill we took a good long look at it.”

The chassis is 3/8” high tensile steel single channel with a 5,105-millimeter (201-inch) wheelbase to accommodate the 40-inch Stratosphere sleeper. 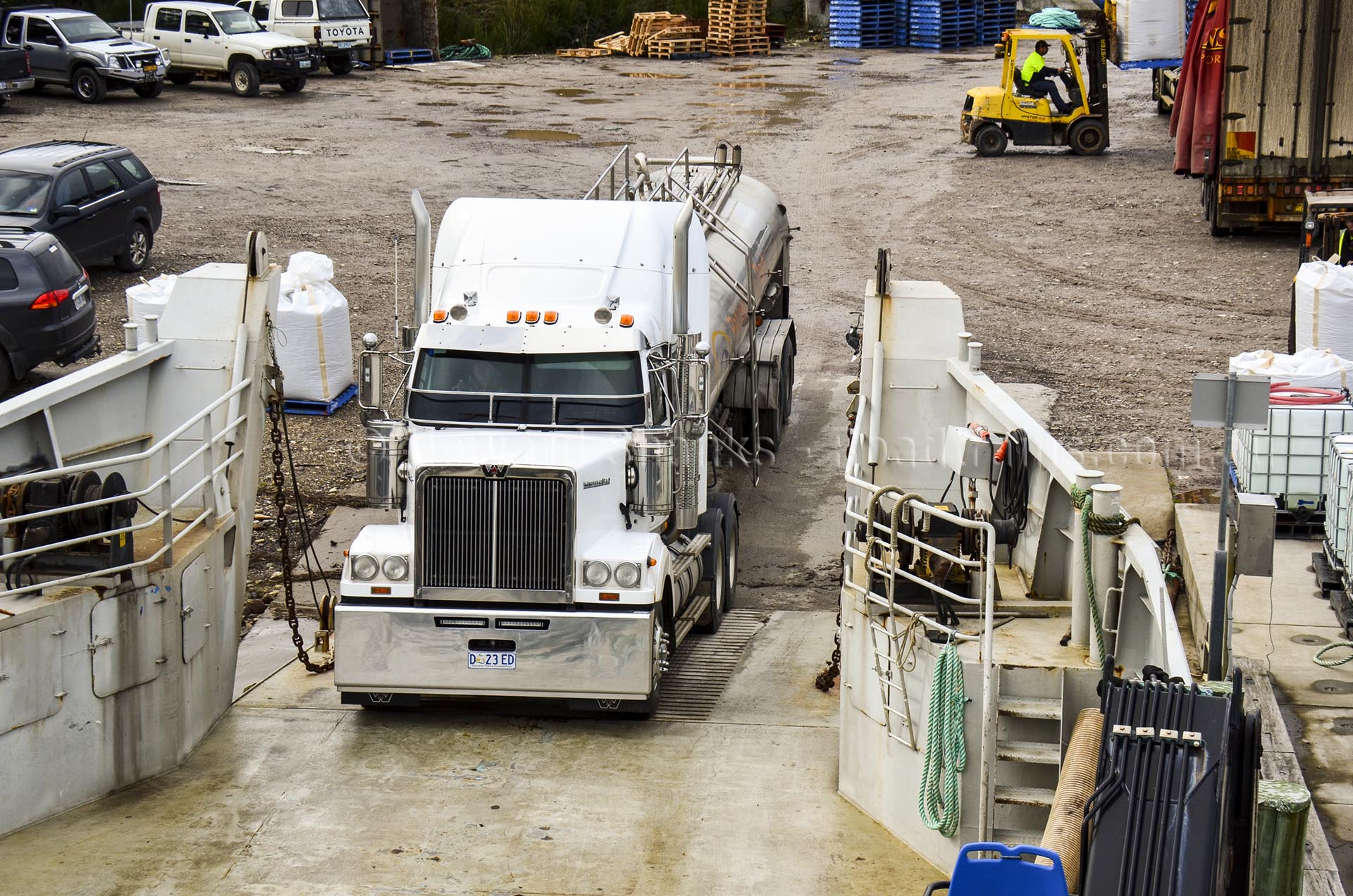 Up the front of the chassis Phil specked the 6.5 tonne Meritor, MFS16 axle with 6.600kg taper leaf springs, that include threaded bushes and high capacity wheel bearings long with a TRW TAS-85 power steering box.

“This front axle has bigger wheel bearings which last far longer than a lot of other front axles with the smaller bearings,” Phil added.

“One thing that attracted us to the Western Star Constellation was the fact that the cabin finish is extremely well done and it is very durable,” Tiger pointed out. “Our original 4800 Western Star is getting on a bit now and when all the trucks are lined up together its hard to tell which trucks are new and which ones are old.

That’s saying something too, as each truck can spend up to four hours a day out at sea on the barge. When it blows up and it quite often does down the West coast the trucks get pounded with seawater.”

Phil Salter pointed out that the reason the Constellation cabins are so durable is because they made from double sided galvanized steel that is then treated with a 17 sage cathodic E-coat system and finally finished with aluminised wax rustproofing in all cavities.

“The fiberglass bonnet and cab skirts are extremely durable and well suited for severe service duties such as this one down the West Coast,” Phil added. 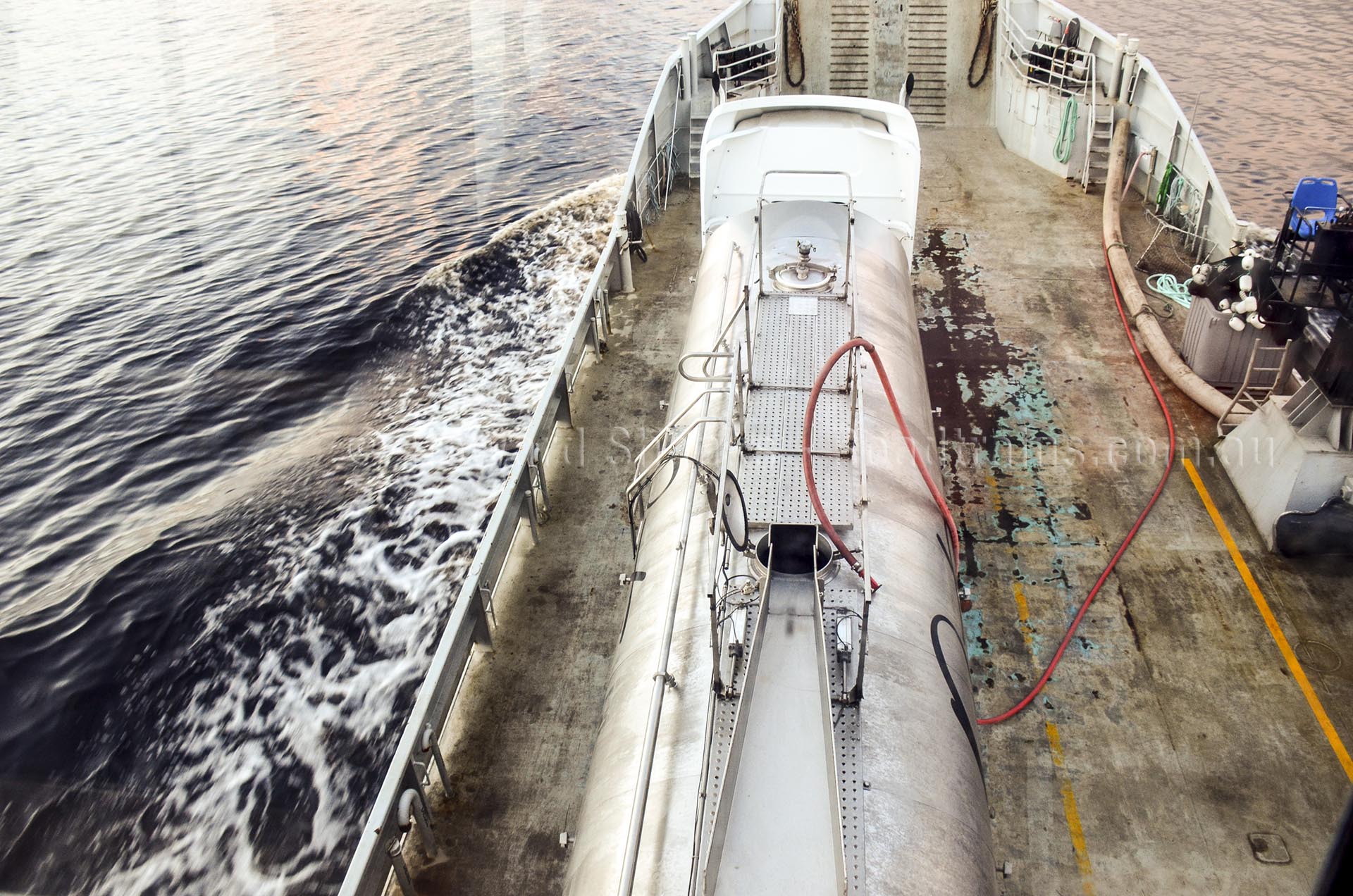 “The barge will leave at 6.30am tomorrow from Strahan,” Tiger said. “Gavin Direen will be in the first 4800 and he’ll be loading the harvested fish. The by the time you get back, Gavin Saunders should be there ready with a load of live fish.”

“Probably pay to swing by the barge this afternoon and introduce yourself,” Tiger added. “By the way keep an eye out for black ice and snow, there has been a bit of that over the past few days.”

Forty minutes after leaving G&D Transport’s Devonport depot, Tiger said to head south down the Ridgley Highway and follow that till it meets the Murchison Highway.

The scenery along this route is nothing short of spectacular, and it’s easy to see why the West Coast has a revered reputation as tourist haven for its World Heritage Wilderness Park. Although this time of year there are few tourist as it damn cold.

Commonly referred to as ‘The Wild West’ largely due to its extreme isolation, it is regularly considered “outside” the tamed and agriculturally developed eastern side of the island of Tasmania. Up until 1960 the only way to get to Strahan from the north of the island was a perilous journey by sea which required negotiating the notorious ‘Hell’s Gate’ at the entrance to Macquarie Harbour. A road linking the town with the east of the state was built around 1930 but it too was hard slog.

Yet the west coast has been mined, it has had railways penetrate, and roads and power lines move through the landscape, it has been entered, but in many locations – where mines or other activities have closed, or settlements become abandoned, vegetation and time have in many cases hidden these locations. The west coast has a much more wet and sometimes harsher climate compared to the east coast, frequent low pressure systems hit the west coast and cause low level snow, ice and small blizzards that block the west from the east coast. In winter temperatures at sea level hover around 10 degrees and some times struggle to get over 6 degrees.

By late afternoon, the short tour of Petuna Seafood’s Strahan operation had concluded, we’d met Donald who would be looking after us on the barge, given some safety instructions and shown where to park the next morning.

Macquarie Harbour is a body of water that is seven times the surface area of Sydney Harbour. The natural mix of clean, cold fresh water flowing from the Franklin & Gordon Rivers into the salt waters of the Southern Ocean provides a perfectly natural environment for growing premium quality Ocean Trout and Atlantic Salmon.

It was still dark when Greg Direen began reversing his 4800 Western Star on to the Combie Trader II. He skillfully guided the tanker into a chute on the port side of the barge. That chute on the barge connects to a chute on the trailer, where the harvested fish are fed into the tanker. Because fish are naturally attracted to running water they literally swim up a pipe, which is connected to huge water pump, into the harvester then down the chute into the truck. 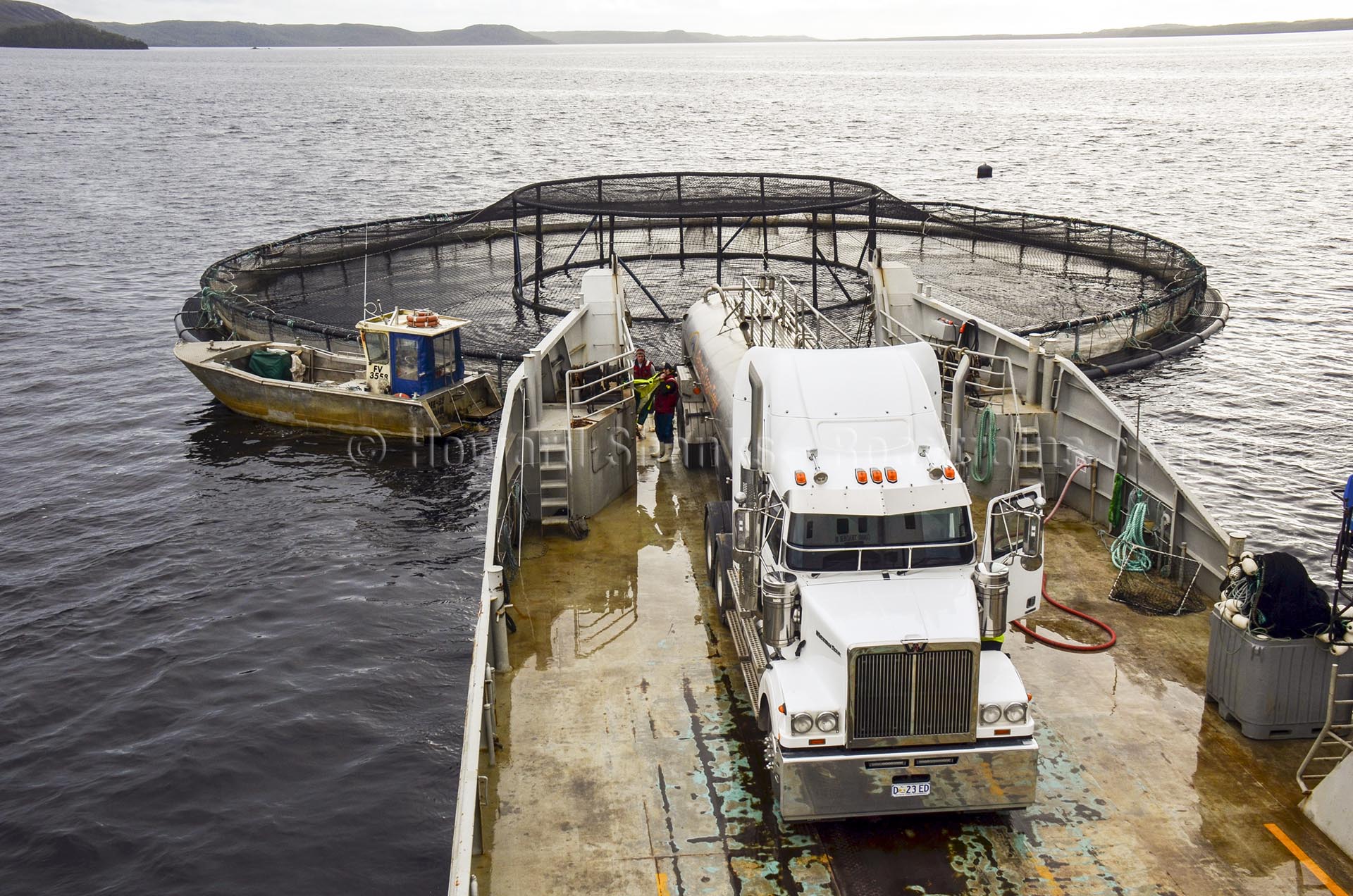 It takes roughly an hour to sail out to the ponds where the fish are grown for up to two years. The Australian designed onboard harvester, by Brisbane based Seafood Innovations, can process 30 Ocean trout per minute and up to 60 Atlantic Salmon per minute.

Greg explained that he normally carries 2000 Atlantic Salmon or Ocean Trout depending on the demand. This operation is the only place in the world where the fish are harvested at sea and transported in a slurry of ice water to the processing plant at Devonport.

So successful is the system that demands for Petuna Seafood’s fish are highly sought after and they have been granted additional fishing leases to expand their operation in Macquarie Harbour in the near future.

“I can’t fault it, the ride, comfort and road handling are absolutely fabulous,” Greg volunteered. “The Airliner suspension delivers a great ride and it simply gets the power to the ground far more smoothly.

Later that afternoon Gavin Saunders explained how he likes the room in the 40-inch Stratosphere sleeper. In fact he cited the insulation as exceptional as he can get a good sleep in the bunk even on the coldest nights.

Gavin said that the power and reliability of the Detroit engine makes a huge difference as well.

“We took delivery of these Western Stars earlier this year and so far they’ve clocked over 80,000 kilometers trouble free,” Tiger concluded. “The teething problems that normally come with new trucks simply haven’t happened with these Western Stars.” 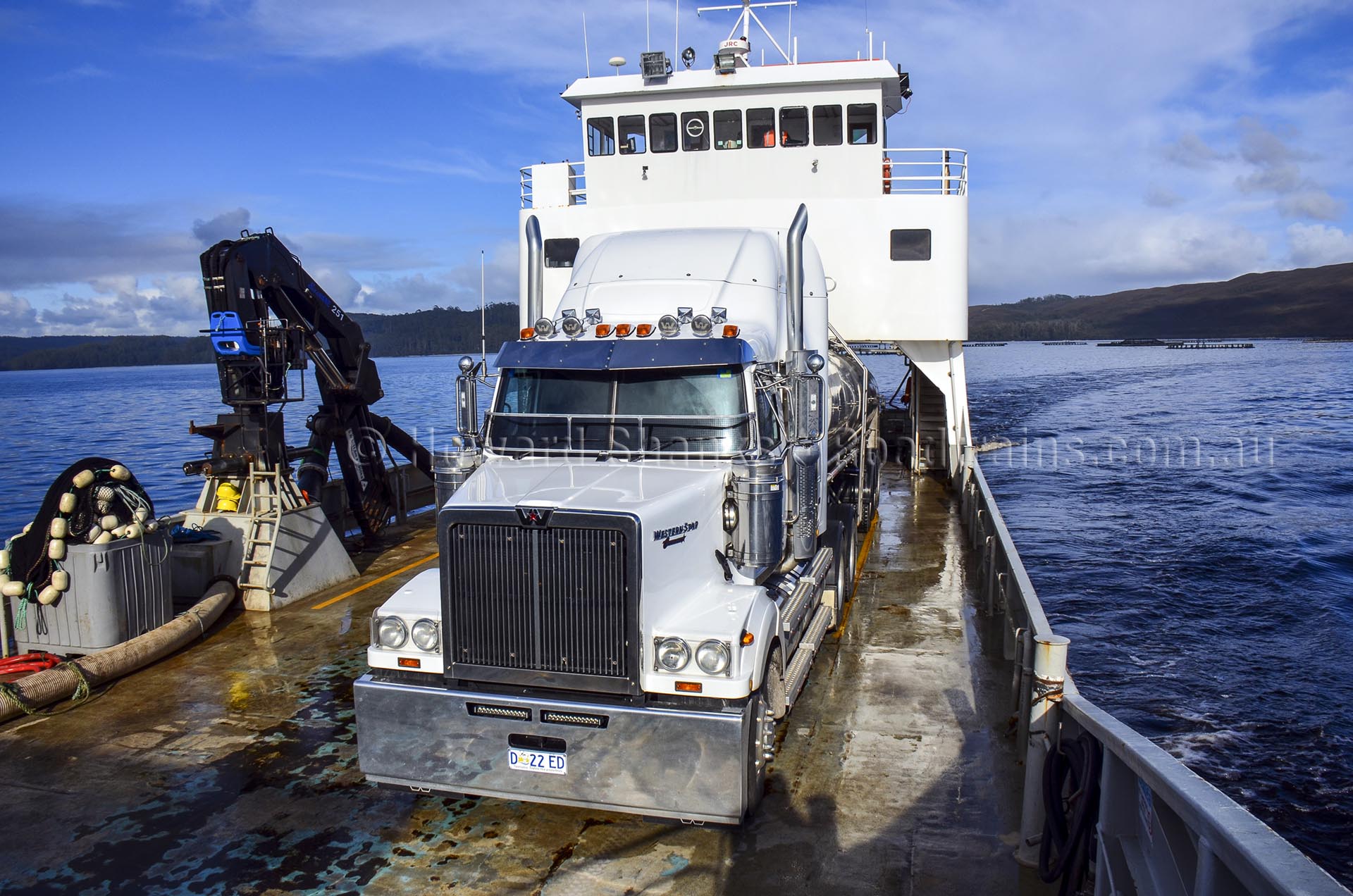 Interaxle Driveline     Dana Spicer SPL170 ‘XL’ with half round yokes