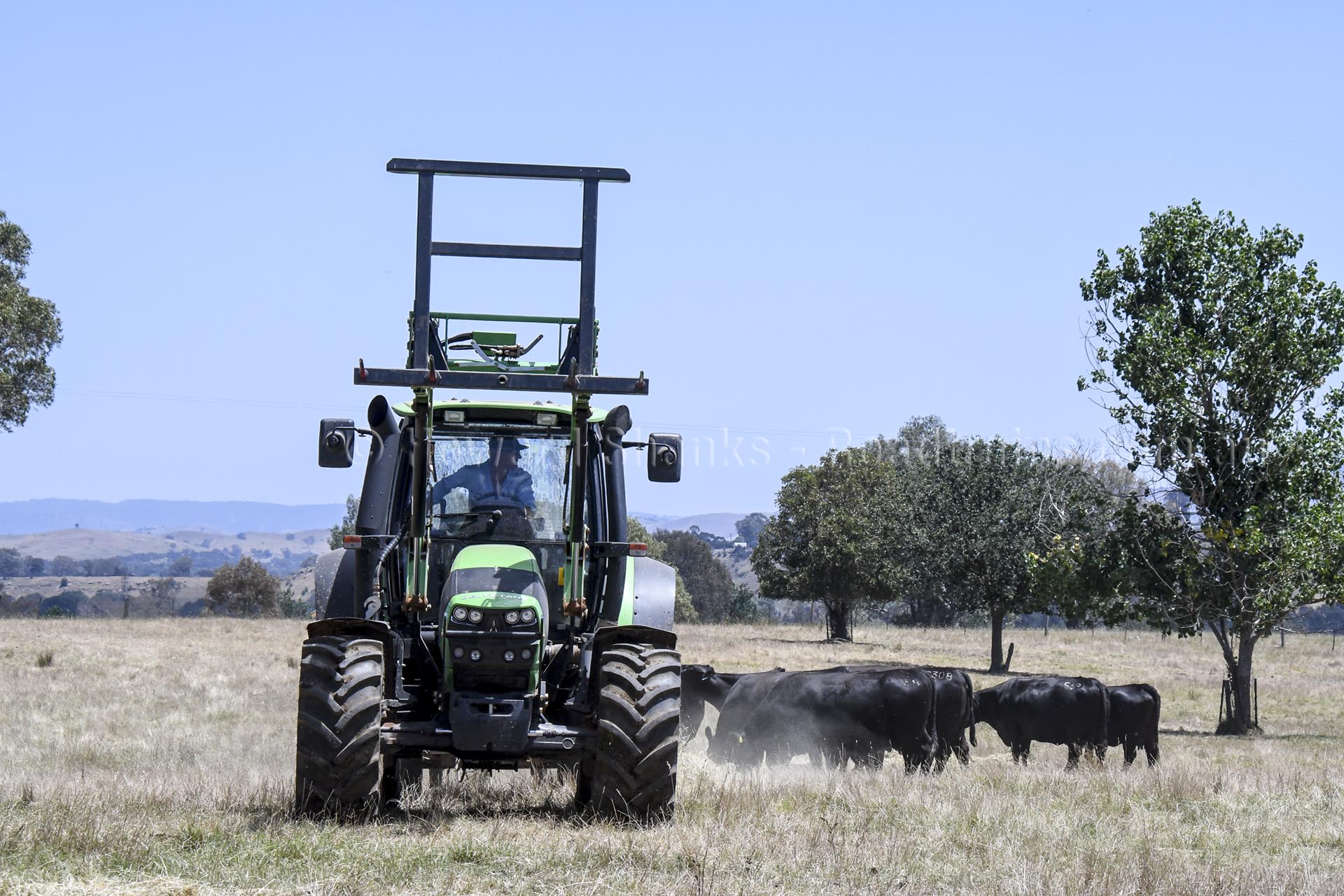 Deutz-Fahr M600 Agrotron with the Agrolift 4020 Plus loader

Simplicity, reliability and ease of use along with local back service, is what swayed Northeast Victorian premium beef producer James McCormick to invest the new Deutz-Fahr M600 Agrotron.

James and wife Emily run a Te Mania Angus recipient and donor cow head at Mansfield, Victoria, in the heart of the high-country cattle area. Keeping their herd fed is not only a full time job for all the hands but one with high machine utilization, which sees their Deutz-Fahr M600 Agrotron clock up several hours on a daily basis.

Te Mania Angus cattle are reportedly sort after for their high marbling steers and premium meat quality. The breed’s unperturbed temperament enables them to be handled with low stress stock handling principles, which improves a trust between the animal and its handler that stays with the animal throughout its life. This is an important part of ensuring quality premium meat package.

At the McCormick’s farm on the north side of Mansfield, it’s mid summer and the mercury is nudging a low 40 degrees Celsius, under the shade of the large tree in their back yard. In the surrounding paddocks the grass is short and golden brown.

James steps out from under the shade of the tree and extends his hand with warm friendly greeting and introduces himself.

“You’re picked one of the hottest days this summer to turn up,” James smiles.

“Well you’ll really get to see how well the air-conditioner works in the M600 today,” he adds. 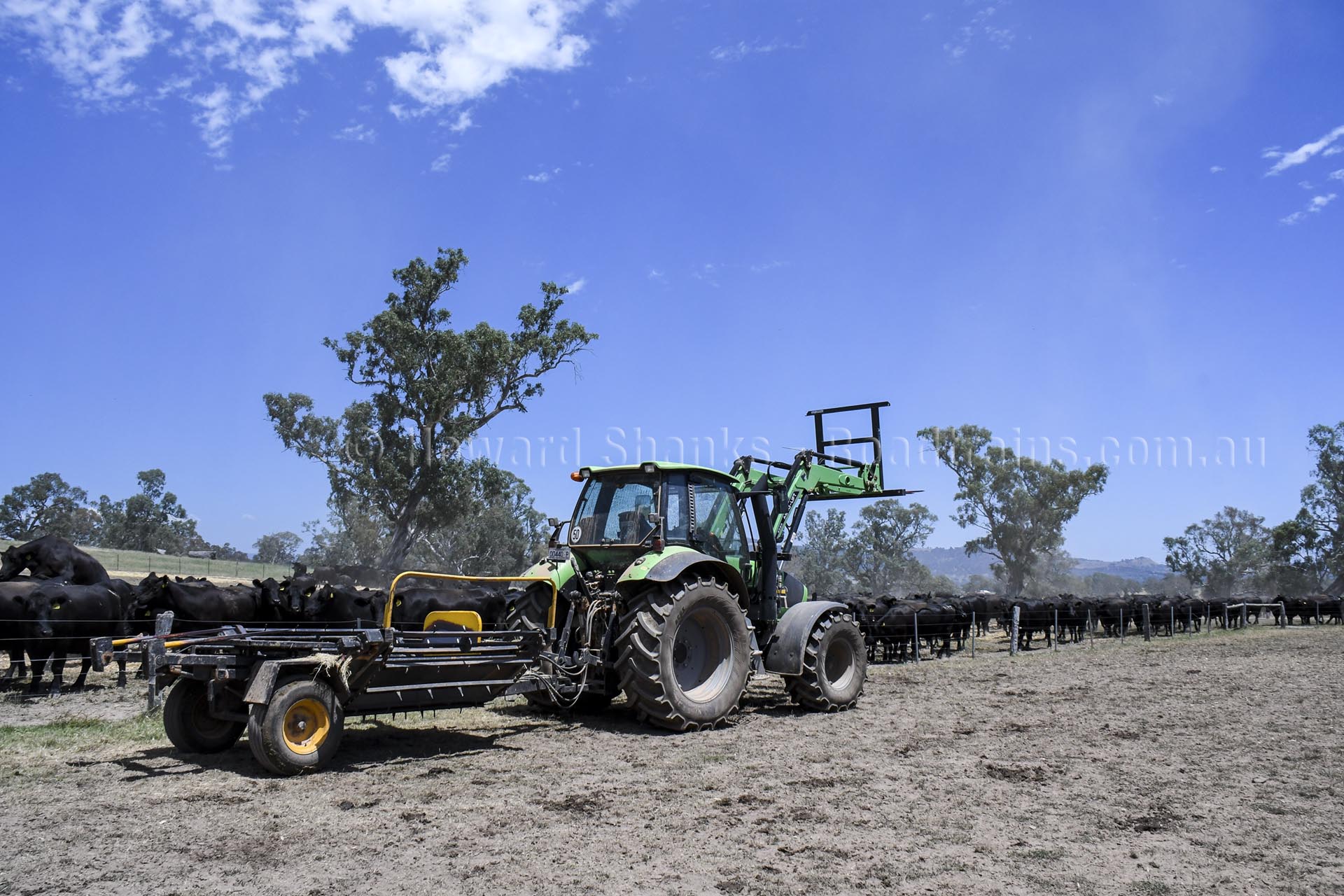 “Our tractor usage is higher than you might think primarily because we have several cycles that coincide with each other from ground preparation, planting and harvesting,” James explains. “Then in between planting and harvesting our silage crop we have to feed our cattle, so our M600 Agrotron rarely gets time to cool down.”

“I specified the Agrolift 4020 Plus loader with the quick hitch option to allow for efficient implement change over,” James continues. “At the moment I’ve got the forks on for lifting round bales and later on this afternoon I’ll swap them for the bucket to scoop up some dirt down the back paddock. It only takes a few minutes to change each implement.”

“Even though the Agrolift 4020 has comes standard with the Euro front implement hitch, which in theory will fit most attachments from European manufacturers, some my older attachments just won’t fit. Our local dealer Mick Hearn from Mansfield Farm Equipment did a few modifications to the Deutz-Fahr quick release so I could attach the implements from the old tractor this one replaced.”

“One of the main attractions with the M600 is the incredible visibility out of the cabin when using the front end loader,” James explains. “It is by far the best I’ve experienced. I did spend some time looking at other brands and narrowed down a short list and the visibility was one of the swaying features.” 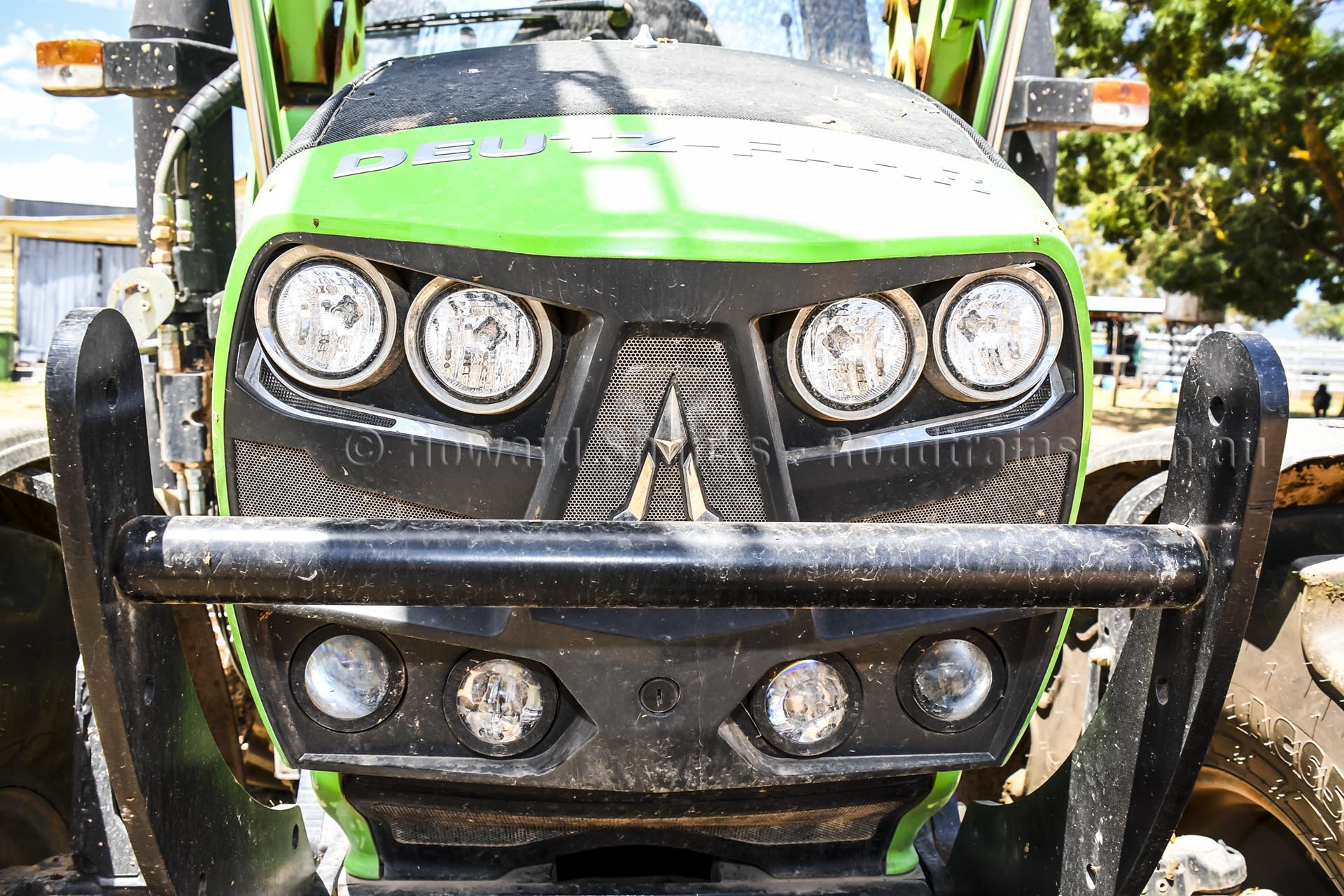 Performance wise the Deutz-Fahr M600 Agrotron has a 6 cylinder, 2 valve per cylinder, 6-litre DCR common rail, turbocharged and intercooled engine that delivers 141-HP at 2300 RPM. The engine is 100 percent Bio-diesel compliant and runs a powercore air-filter with dust ejectors.

As one of the oldest and largest engine manufactures in the world, it instills confidence knowing that in the heart of this machine is an engine that is backed up by a legacy like Deutz.

“Like all forms of business efficiency and productivity need to be constantly improved to reduce operating costs and that’s the philosophy behind the host of intelligent technologies built into the Deutz 6-litre DCR engine,” Mick Hearn, Owner of Mansfield Farm Equipment explains. These new Deutz engines have the power control feature, which ensures that there is enough power on hand when needed, but at the same time fuel consumption is reduced. It might sound some what contradictory but the innovative combination of the ECM and Deutz Common-Rail-Technology deliver a very efficient engine control system.”

James agrees with Mick, citing thier M600’s performance in the paddock is more than what he expected and very pleasing with the economy of the machine when it comes time to fill it with fuel at the end of the shift. 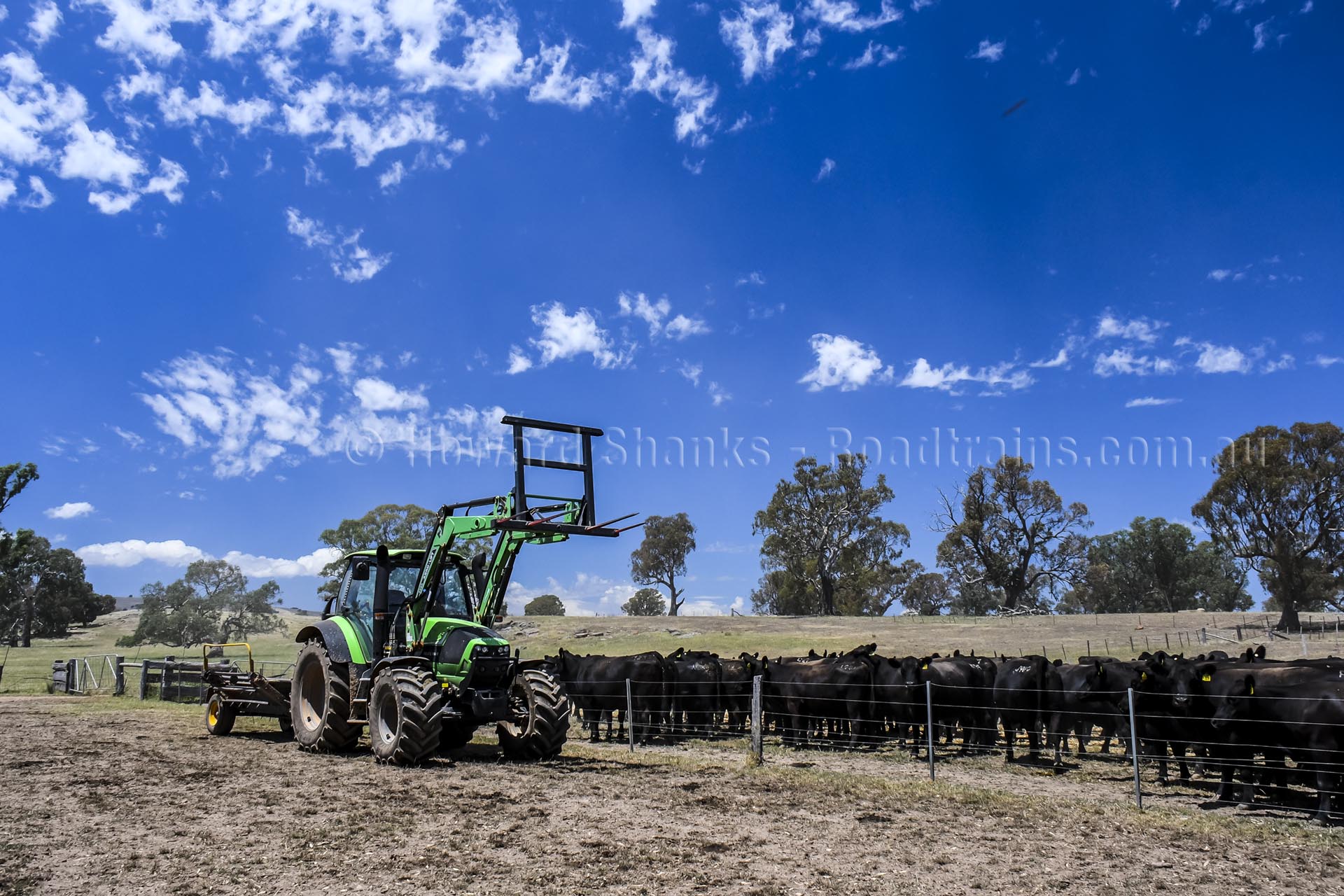 The M600 Agrotron has the highly reliable and well regarded ZF transmission, while it offers peace of mind, there is nothing that is cutting edge about this gearbox, but it’s simplicity ensures proven longevity. The main gear shifter has six ranges and is located to the right of the operator.

The four power-shift gears in each range can easily be operated with push buttons, either on the gear shift or on a toggle switch on the arm rest. This gives the M600 a 24×24 transmission.

A display on the dash shows what power-shift gear you are in. 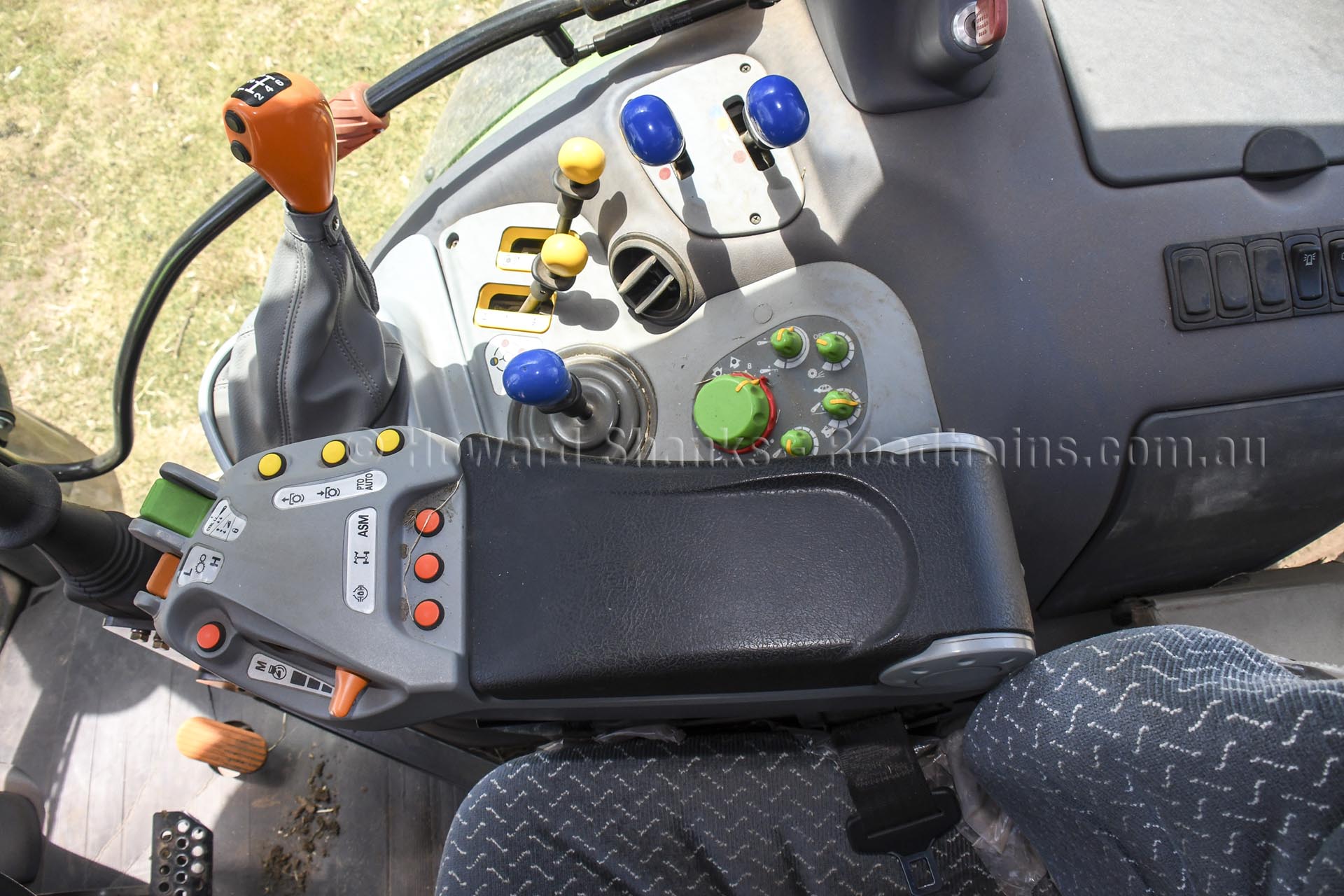 Most of the controls are conveniently spread out on the right-hand armrest and console. If you’re new to Deutz-Fahr tractors you might be taken by the vivid array of colors used to color code the different controls. Orange is for the transmission, Yellow for Power take-off (PTO)  Green for linkage and Blue for hydraulics.

A slide on the armrest easily controls the engine rpm via your thumb and as a bonus there is pre-set engine rpm memory button. Further back in the console are buttons for four-wheel drive, diff lock and ASM (acceleration simulation mode), which automatically engage and disengage both 4WD and diff lock, depending on the forward speed and steering angle.

Meanwhile any of the four PTO speeds can be selected using two levers on the console, while a button conveniently placed on the arm rest engages the PTO. 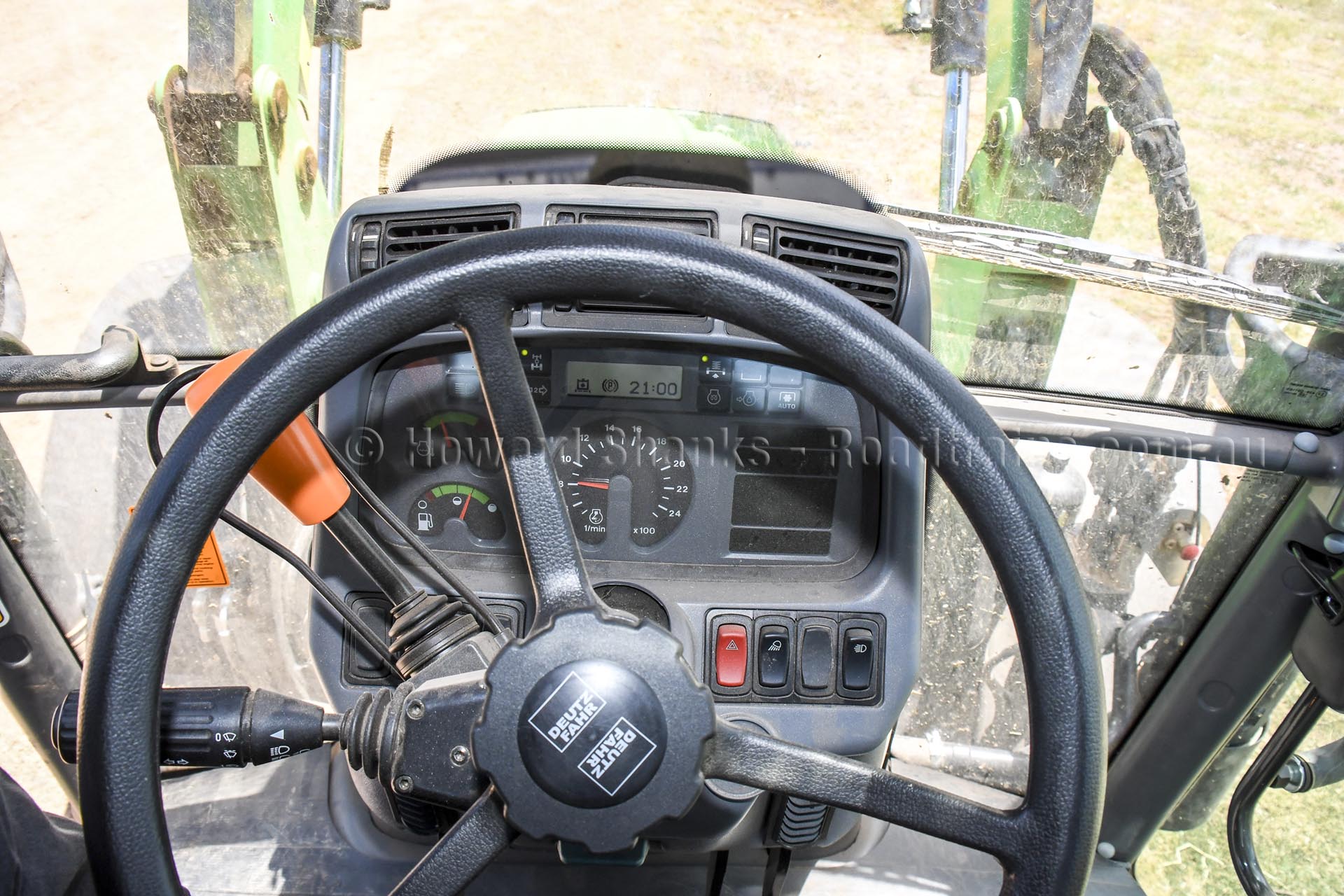 It is impressive to see four remotes as standard on the Deutz-Fahr, as opposed to the three fitted on many other tractors. All four remotes feature an adjustable flow rate tap on top, while the controls in the cab use a cross gate joystick style lever. This is used to control two remotes, along with single levers for the other two remotes. All controls are lockable and offer four positions, up or down, neutral and float. 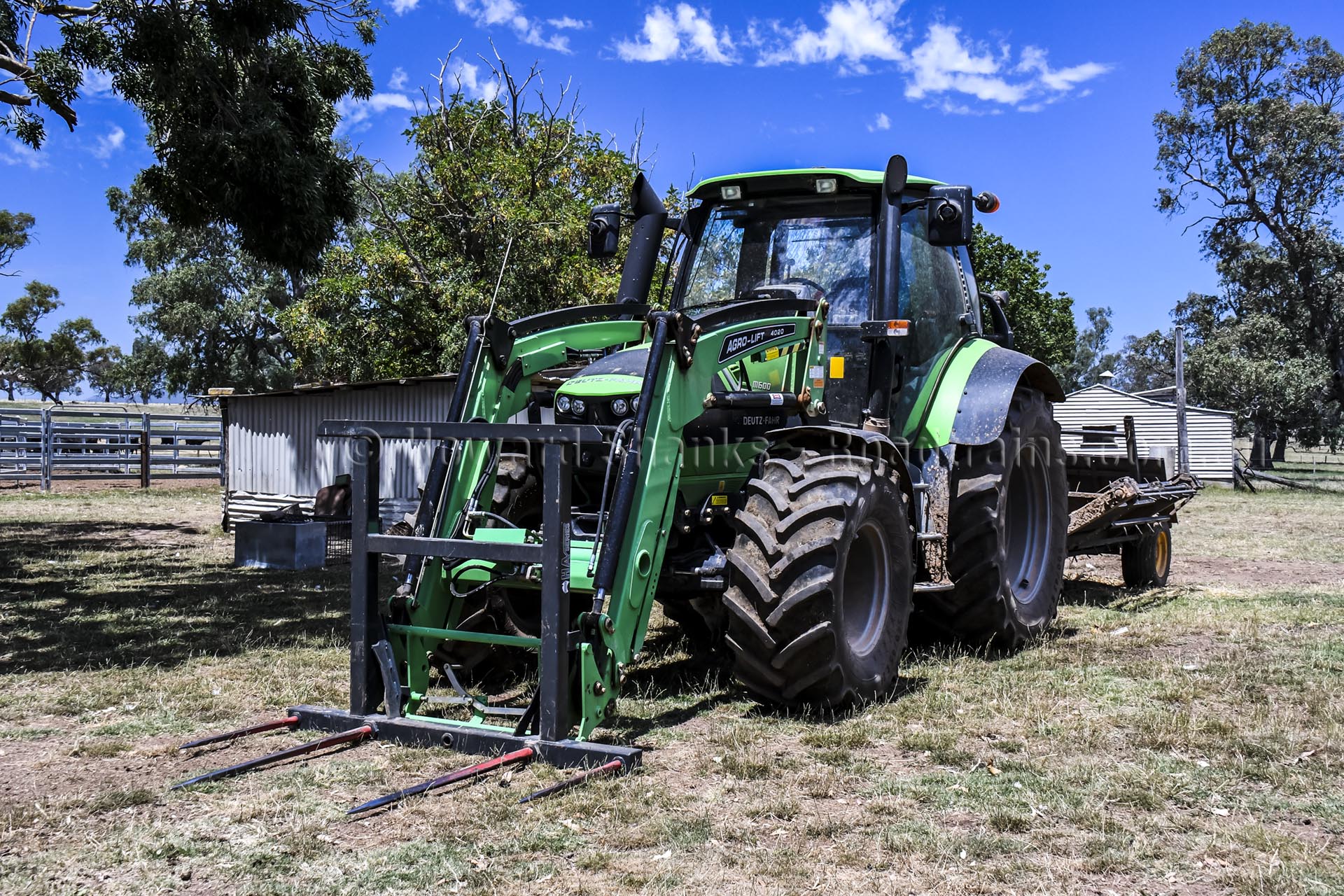 James said the two-point cab suspension delivers a smooth ride around the paddocks. Visibility all around the cabin also rated high on his features list.

“It has a top speed of 50kph and the engine is only running at 2100 rpm, but drop back to 40kph and the revs drop further to 1680 rpm, which means I can get to and from my furthest paddocks in a timely manner without burning a lot of fuel,” James adds.

“Buying locally from Mick at Mansfield Farm Equipment means I have great back up service right at my back door. That might not sound like much but when you’re in the middle of harvest and the machine needs servicing quickly so we don’t have downtime then that’s when it counts.” James explains. “It’s really hard to put a price on that kind of service. But it’s reassuring for us to know we have that back up support.”

“Price wise the Deutz-Fahr M600 Agrotron complete with the Agrolift 4020 plus loader was very competitive. There wasn’t much between the M600 and the other tractors on my short list.” James concludes. “The reason I chose the M600 just came down to simplicity of operation, reliability, the visibility and of course the local back-up service. And so far I’m more than happy with it and I wouldn’t hesitate to look at another one in the near future.”