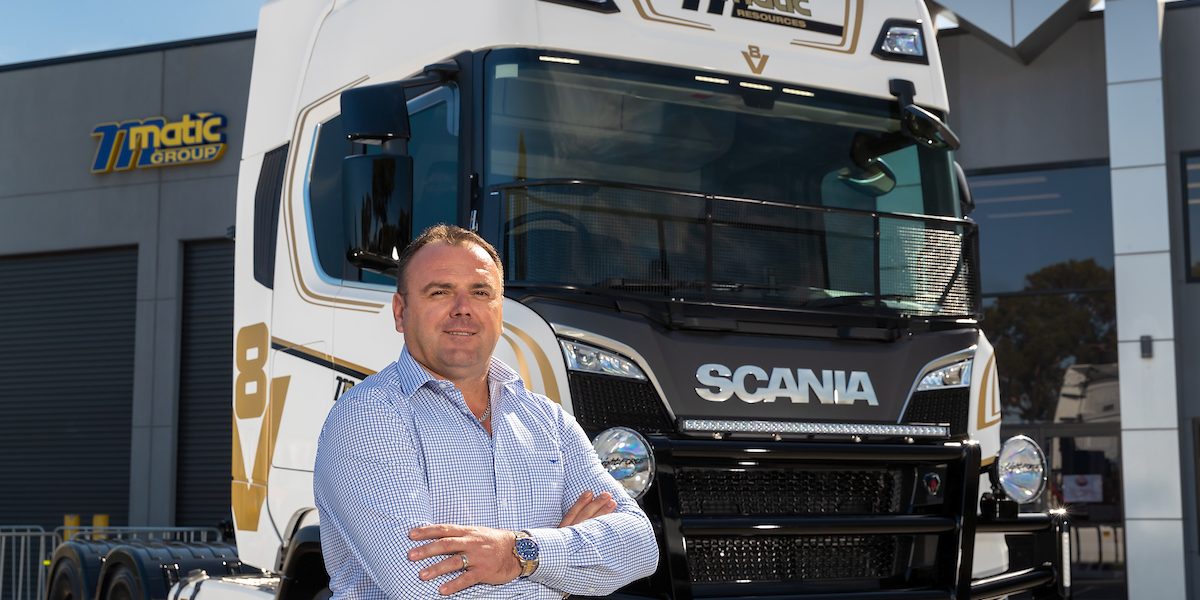 Scania Australia has begun deliveries of its limited edition 50th Anniversary V8  trucks that mark the half century of V8 power for Scania with a limited run of 50 celebratory trucks for Australia. Danny Matic, owner of the Matic Group in Perth was handed the keys to the very first of the limited-edition trucks by Scania WA Regional Executive Manager Michael Berti on 31st March. 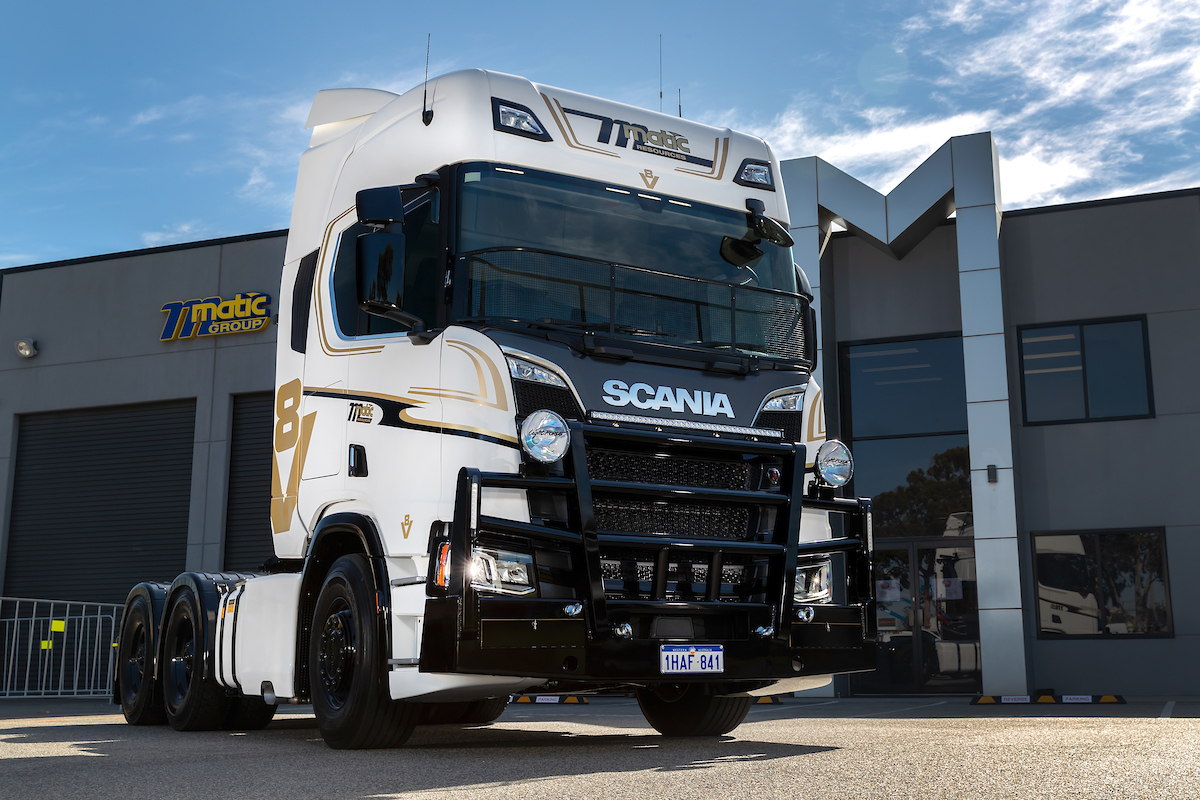 “I was on a visit to Sweden last year and I saw the 50th Anniversary truck and I decided then that I would have one,” Danny said.

“The truck is rated at 145-tonnes and will be used by the Matic Resources Division to haul a 100-tonne heavy haulage float carting machinery up to the Pilbara out of Perth,” he said.

“One of my Scania R 620 V8 drivers will be driving it. He’s a convert from American trucks and is very excited to be getting into the new R 650.”

“It’s a great way to end Q1, handing over one of our 50th Anniversary trucks to Danny Matic,” Michael Berti said.

“Danny has around 20 Scanias on his fleet now across a range of applications and this new truck is an absolute standout. The special black and gold Matic Resources livery completes this truck and perfectly matches the limited-edition graphics, black rims and the bull bar. This is one tough looking unit.” 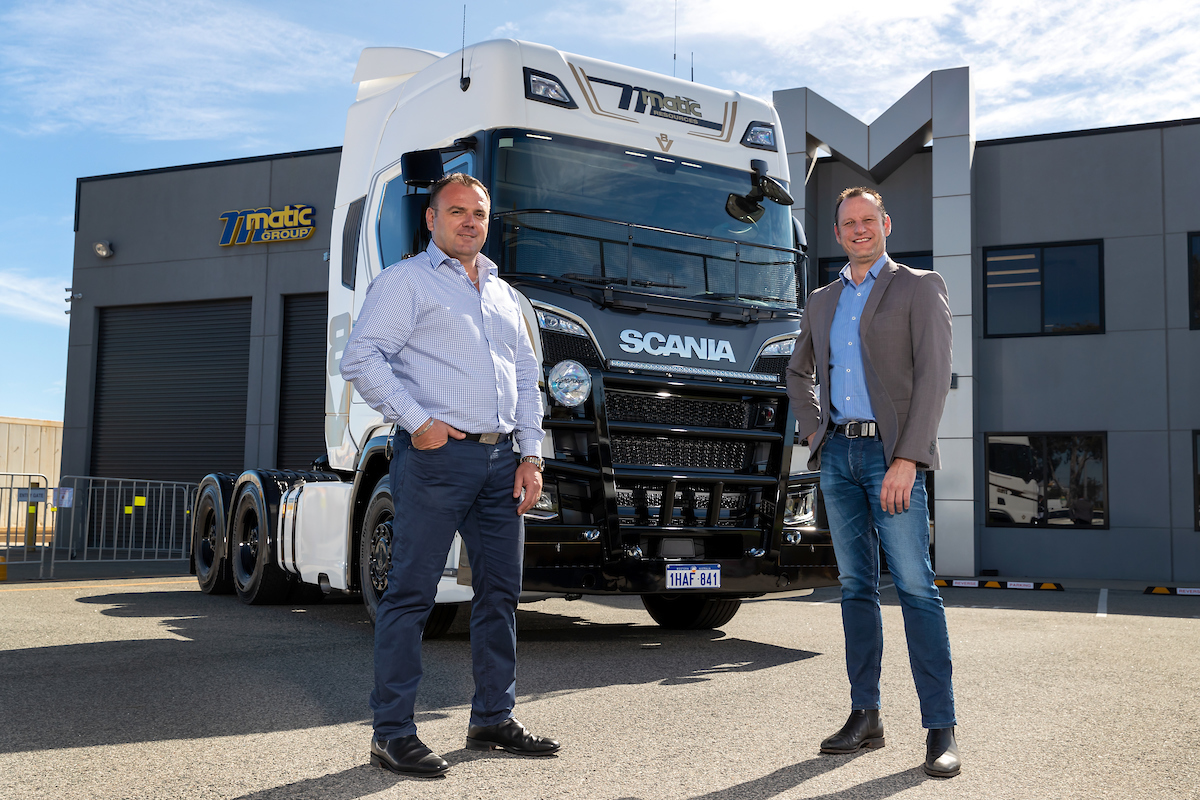 Inside, the anniversary trucks feature a premium leather-lined cab designed for comfort, safety and quietness, although the legendary Scania V8 growl will be heard and felt, just as it should be for a truck celebrating 50 years of unstoppable power and torque.

Further special features include a numbered plaque signed by both Scania Australia Managing Director Mikael Jansson and Sales Director Dean Dal Santo, identifying the vehicle as being an anniversary special. 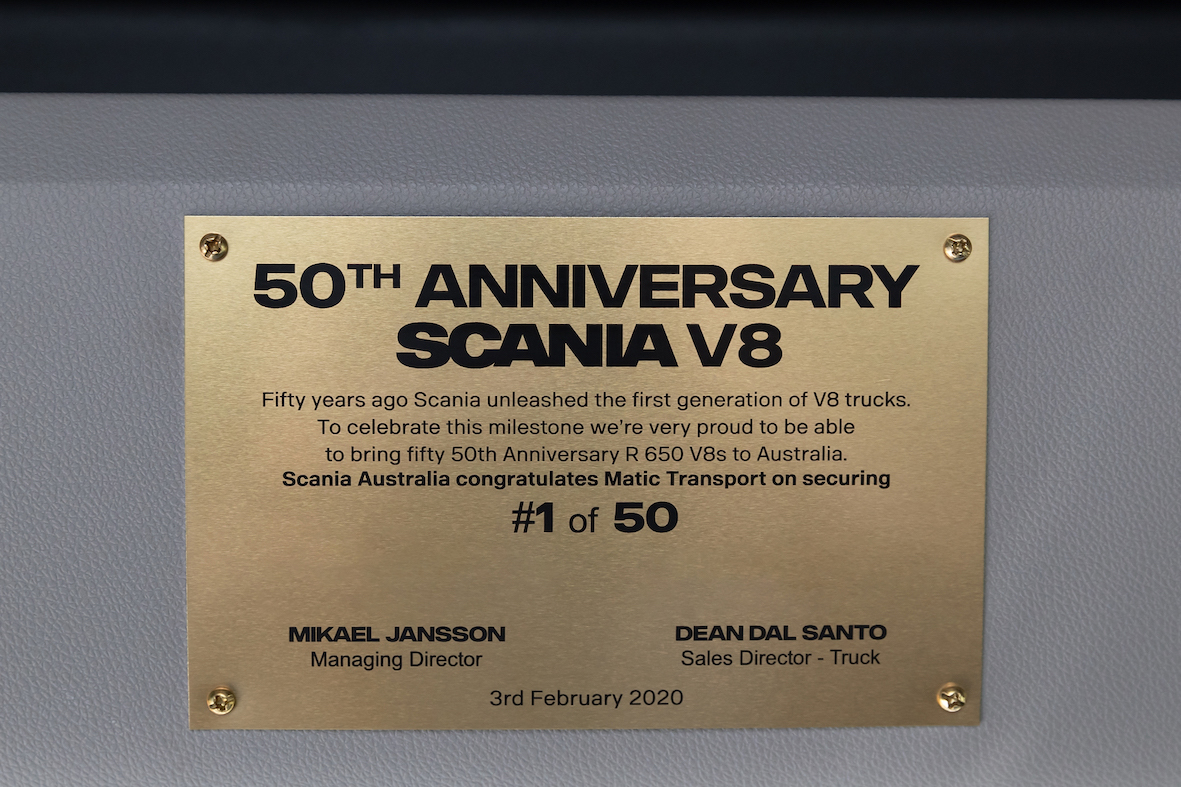 “The Scania 50th Anniversary Edition recognises the huge role the V8 engine has played in the consistent growth of Scania as the brand that delivers high horsepower with low revs and low fuel consumption,” Dean said.

“Scania is the sole supplier of V8 engines for the heavy vehicle market in Australia and our V8 range starts at 520 hp – a figure that would have been all-but unfathomable when the initial 350 hp V8 was launched –  and reaches as high as the flagship 730 hp V8, which is the most powerful on-highway truck you can buy in Australia, complete with 3500 Nm of torque,” he said. 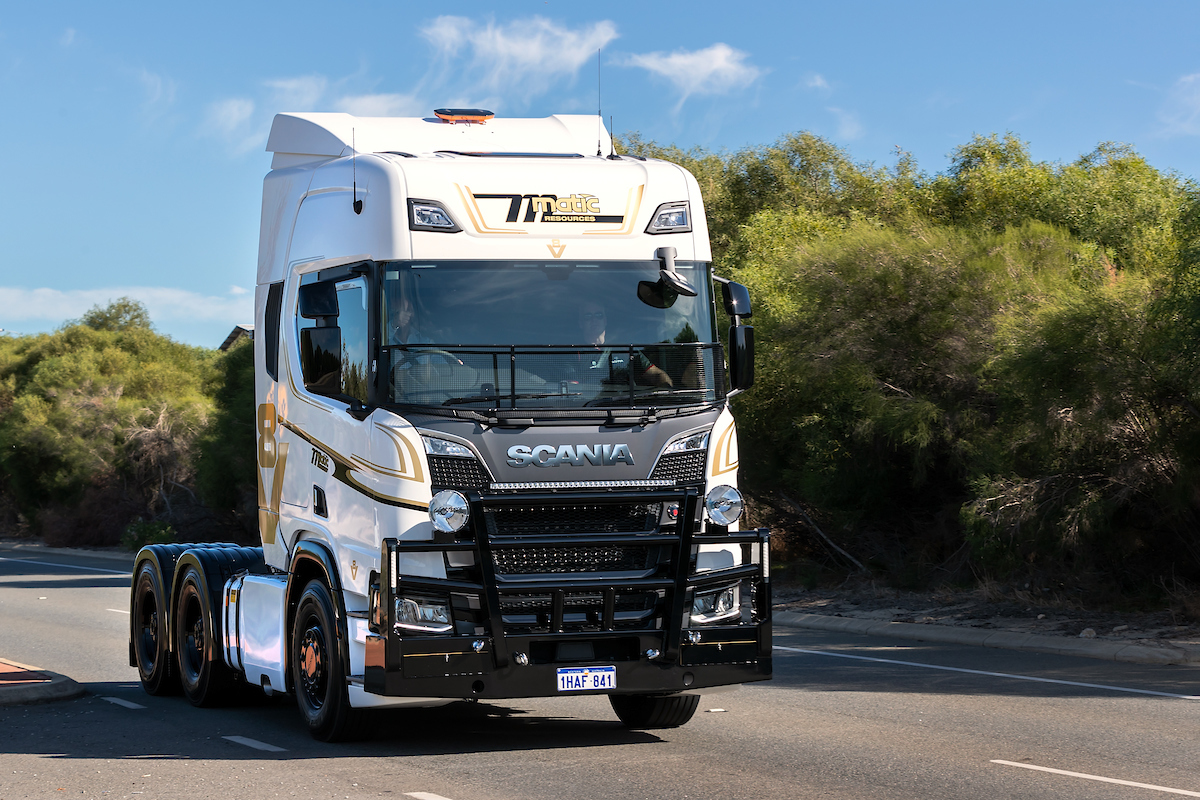 “The special edition R 650 has been specified with Australian customers in mind and will provide an eye-catching hero to any fleet.”

The 650 hp engine is one of the latest high-technology engines Scania has introduced with the New Truck Generation. In addition to producing peak torque of 3300 Nm (300 Nm more than the 620 hp version), the new generation 650 hp is Euro 6 compliant and delivers impressive fuel efficiency.

The new generation 16.4-litre V8 family is built on many of the successful features sourced from previous generation V8 engines: out of approximately 650 components that make up the entire engine, 200 are completely new.

Trucks powered by the legendary V8 engine account for around half of the more than 1000 Scania trucks sold in Australia each year, making Australia one of the more important global markets for the V8 range. 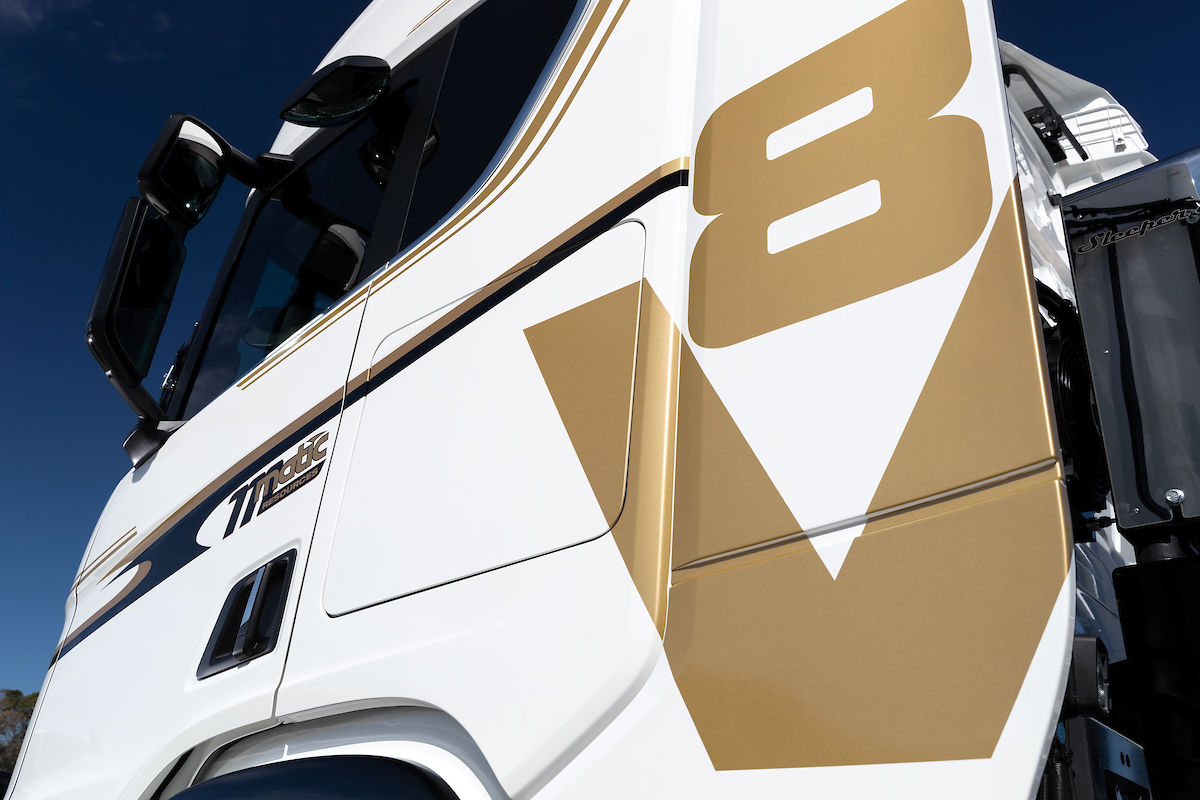