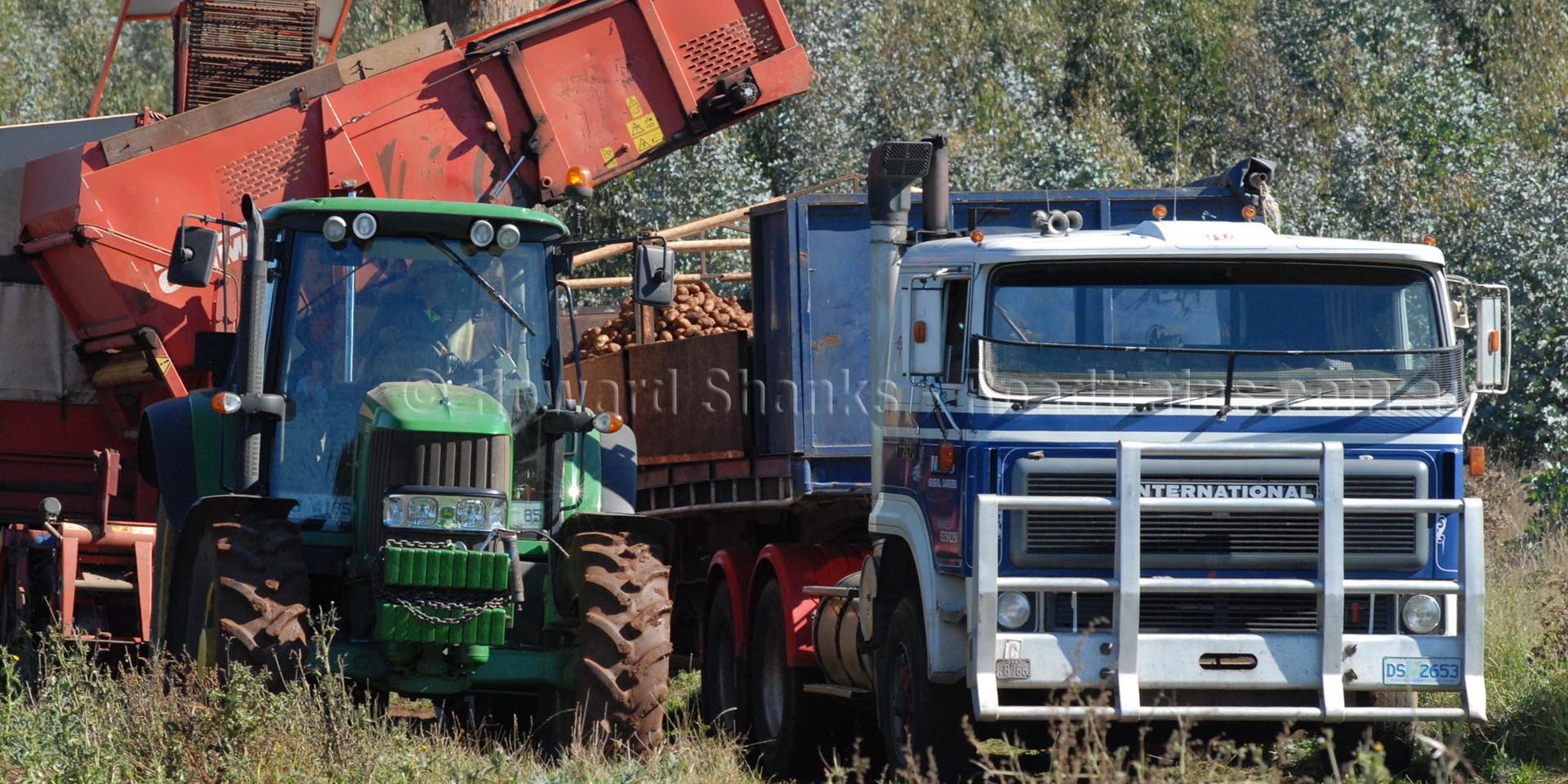 “The blood red sun beat down and baked the red clay ground.
Dust kicked up around the John Deere wheels. There’s no trace of rain in sight …” Pertinent words from Merle Haggard’s song, ‘In My Next Life’, are a common sight around the country. Yet, in North East Tasmania the massive irrigators have once again produced lucrative yields of spuds, Howard Shanks investigates. 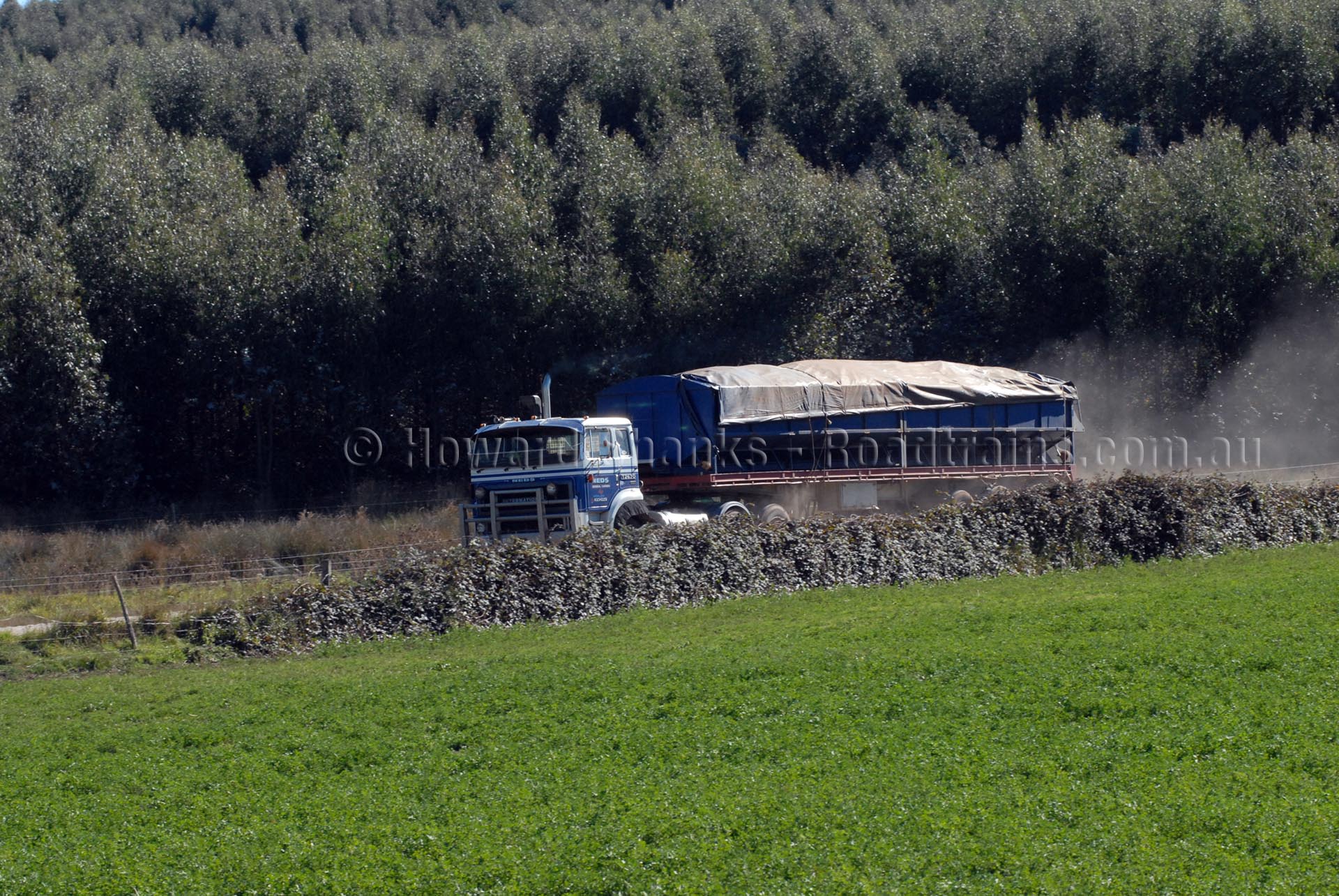 “You’d better make that an eight ounce for Skeet, get one for Heath and I’ll have another, thanks Jan,” David ‘Spud’ King smiles and places a twenty dollar note on the bar as publican, Jan Rainbow, hoists the first eight ounce glass up to the tap.

It is a typical Friday night at the Winnaleah Hotel, where David gathers with most of the other locals at the end of each week. The evening news is all but finished. “Come on you fellas hurry up and finish your footy tipping, Jan says, passing a hand full of tipping-forms back over the bar. 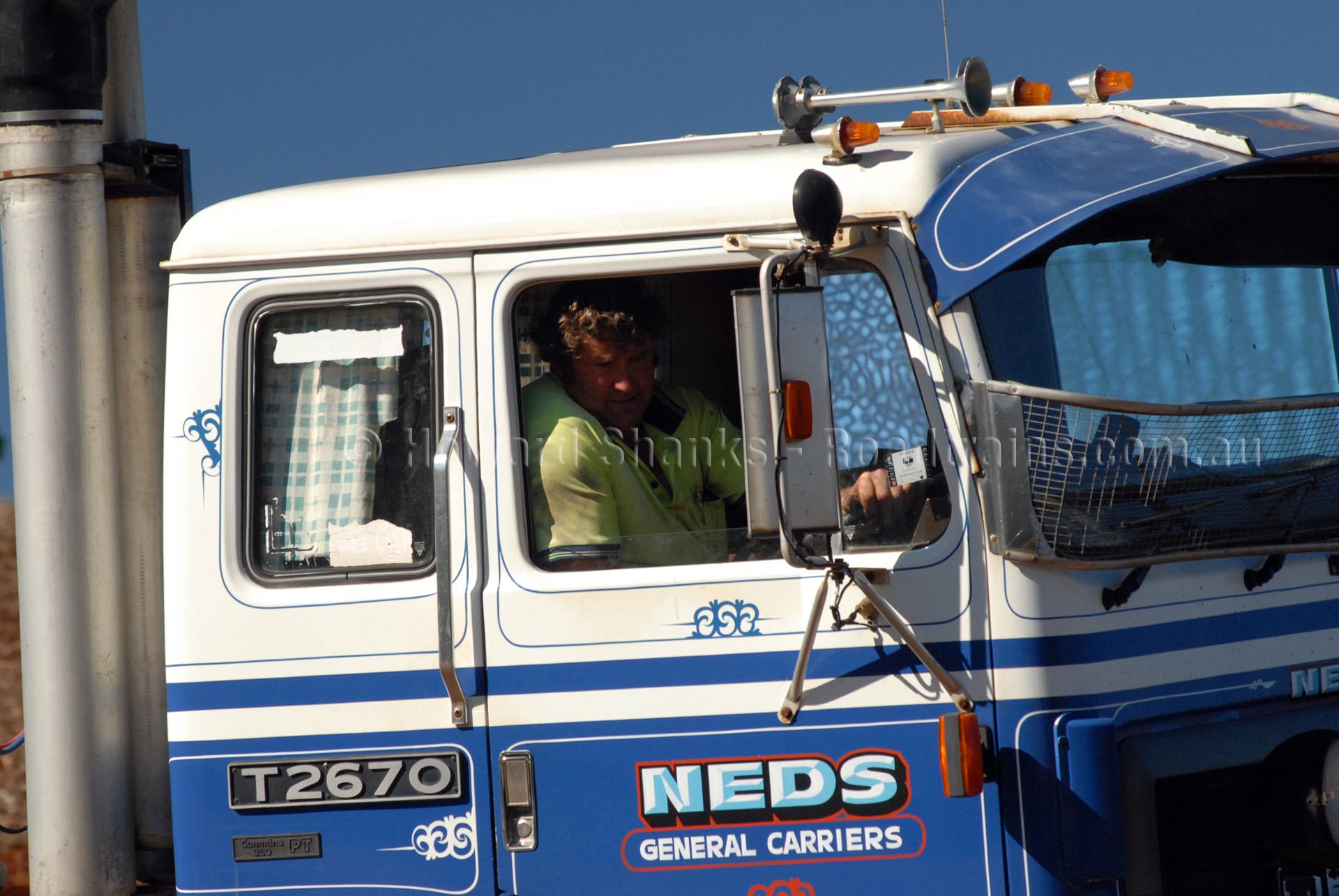 Tonight, David reckoned the Western Bulldogs would beat Essendon, Skeet wasn’t so sure. He, on the other hand, was favouring the Bombers. Heath was undecided but ended up marking the Bulldogs down for the win after a hurry-up from across the bar. “ You’d better make your mind up soon,” Jan smiled, wiping the bar. “They kick off in a few minutes.”

Apart from football, (the AFL variant) which is taken very seriously down here, the annual onion and potato crop is the other big topic this time of year. 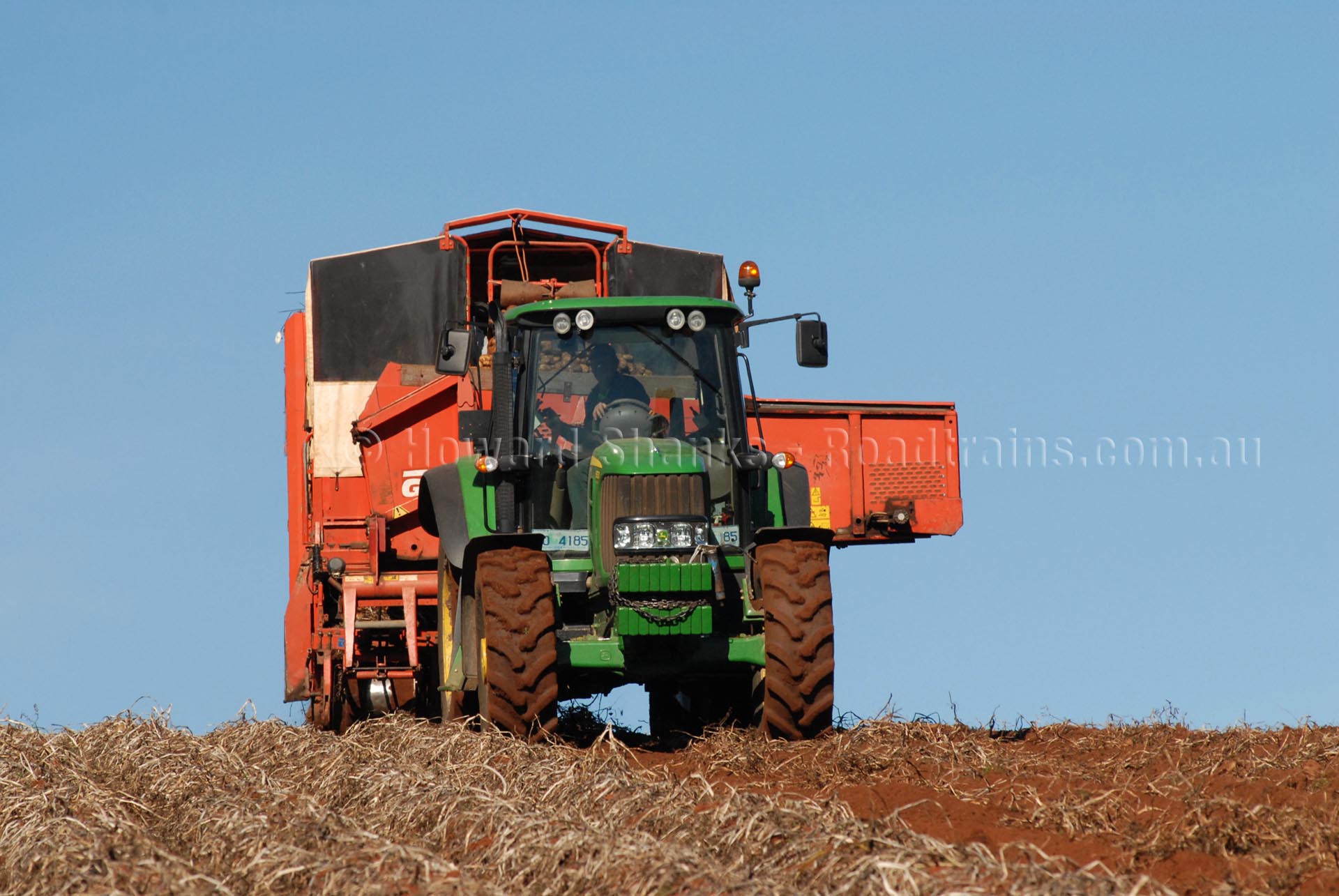 It is said that you can find anything about anything these days on the Internet. Except that is, if you are after any really in-depth information on a little town called Winnaleah up in the back blocks of North East Tasmania. Even the infamous ‘google.com’ doesn’t know much about it, and most of the locals would rather it stay that way too.

Nevertheless, Winnaleah is a town that four-wheel-drives, Blunstones and cattle dogs call home. It is a town where rabbits can be seen scurrying across the main street in the early morning light. It is also home to David “Spud” King, his fleet of International T-Lines and the purpose built trailers they haul during the annual potato harvest. 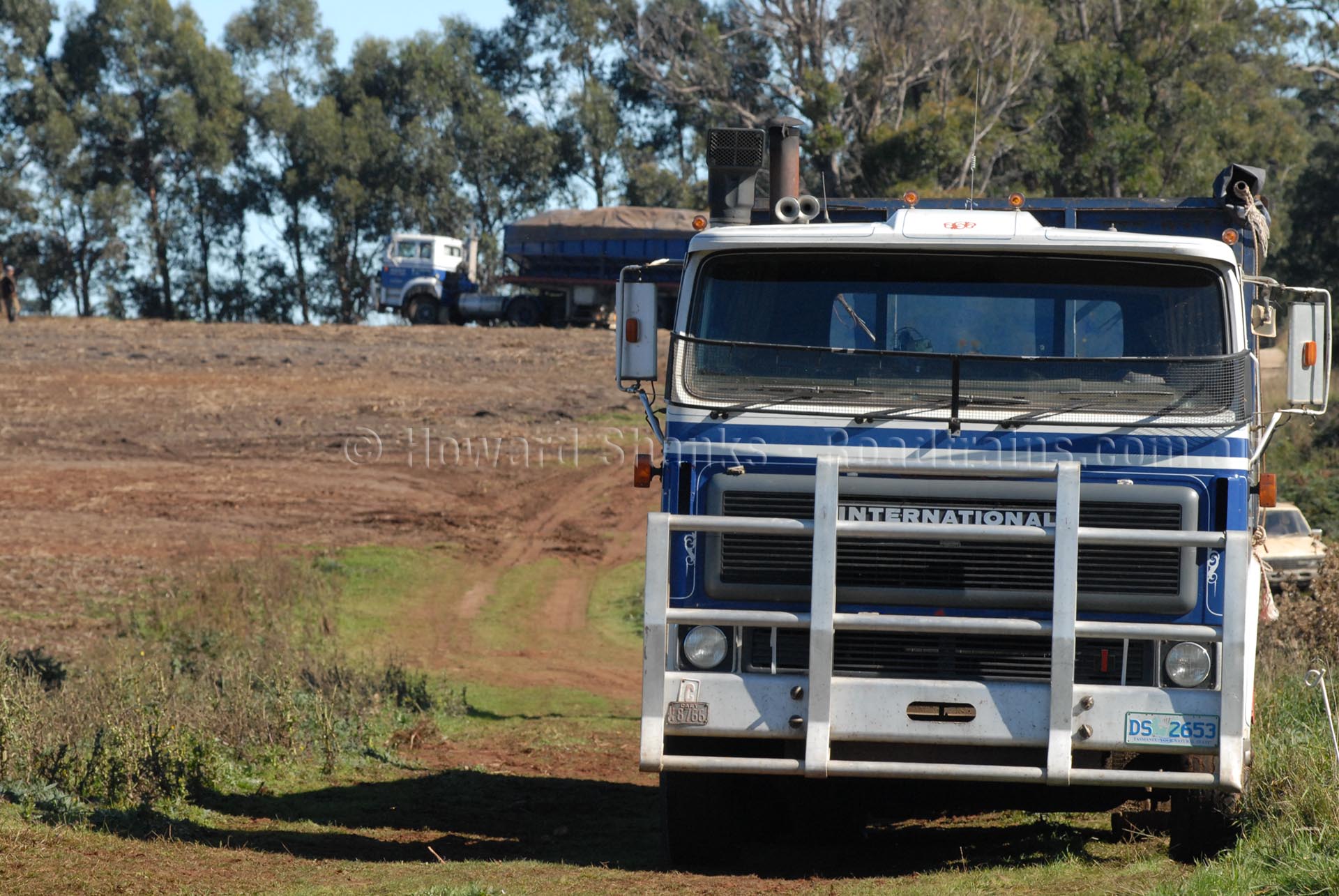 Each year from March through to June, during the harvest you won’t see one of David’s trucks standing still for very long as demand for his services is high and has been for decades.

Characterised by an innate sense of humour and rare generosity of spirit, are just some of the qualities that have earned David the respect of his peers and life membership to his beloved footy team the Winnaleah ‘Magpies’. Making his own way in the world has meant a long and often challenging ride for David. He has gouged and grown the business he took over from his parents that runs trucks across the length of the island state. There have been mistakes along the way, but no more than the lessons they’ve taught. Even so at 50 years of age in the smile of the man that runs NEDS Transport there is still a hint of a youthful rebellious streak. 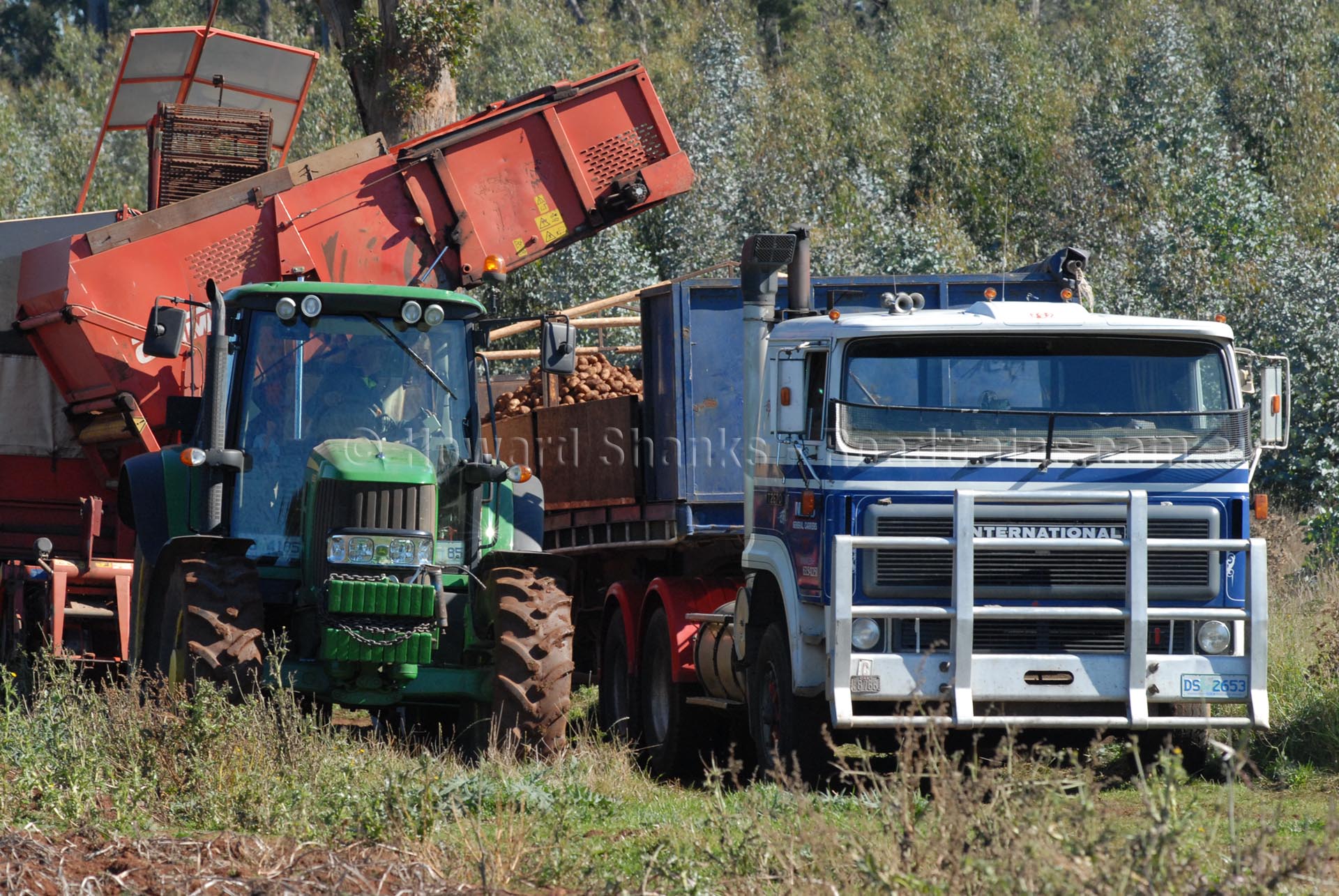 “Back when my parents, Ron and Meg, had the business it was more of a general freight come bus service,” David began. “What you need to realise is that the town and the area was a lot different four to five decades ago. Farmers didn’t have their own trucks, and the freight, for the most part, was bought out on the train when the line ran through to nearby Herrick.”

“The freight on the rail finished up in the late seventies even though the rail continued to run carrying logs out of Herrick for a few more years,” David continued. “After the rail stopped carrying general freight Dad started running a truck to Launceston five days a week and back to Winnaleah providing a general carrying service for the community. That was really the turning point, and the start of what became known as North East Delivery Service. Over time people just shortened it to NEDS. We still have the school bus run too,” David added. 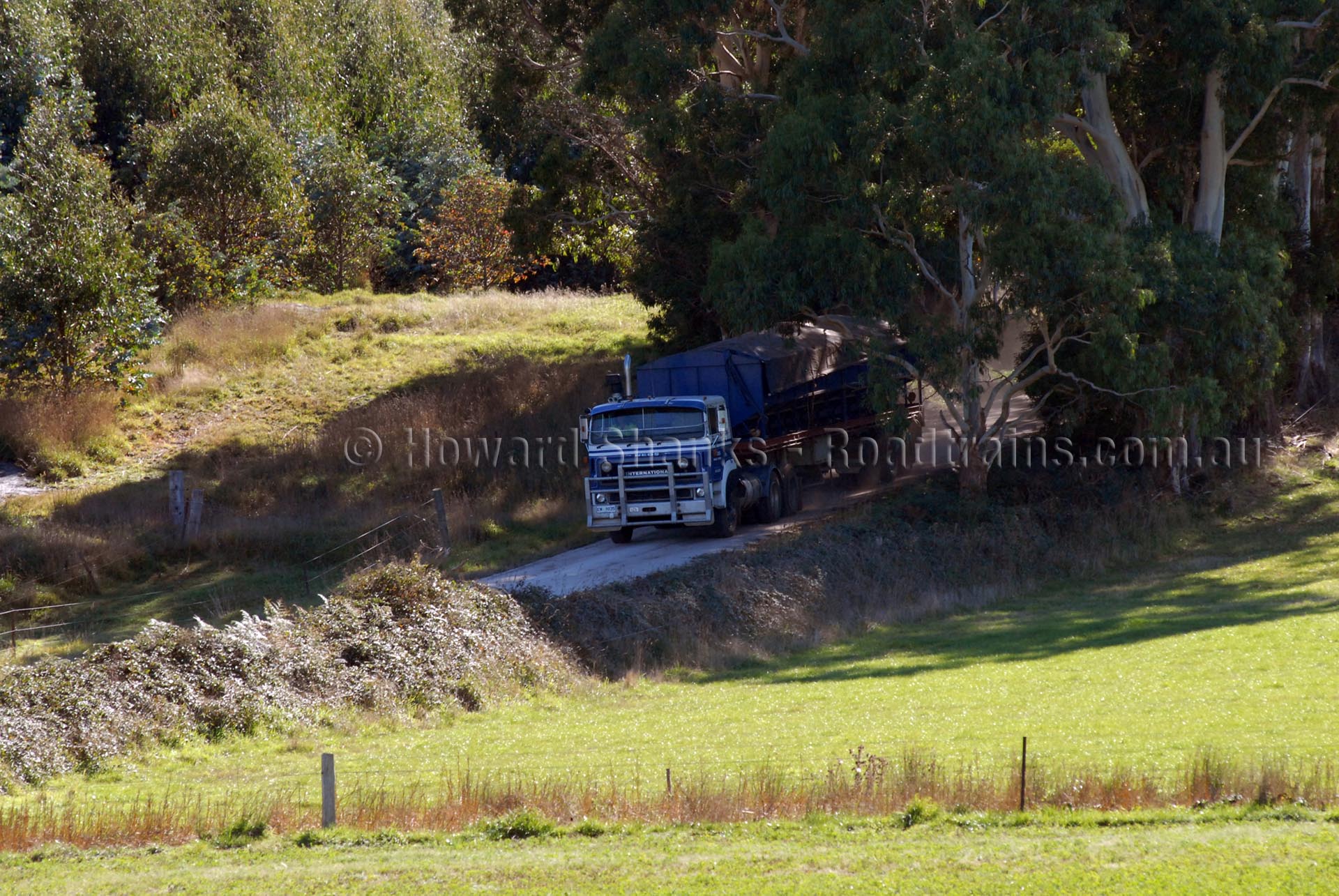 He paused, took a sip from his glass, returned it to the bar and smiled thoughtfully. “I must tell you,” he said, leaning forward grinning even more. “When we were little kids dad had the paper run for the area and some mornings he would take one of us kids, either of my two sisters or me, with him.  We’d have to be up at three in the morning to pickup the papers, bread and milk in Scottsdale. Back in those days everybody pitched in and helped, mind you it wasn’t much fun when the fog was thick and roads icy,” David mused.

“Some years back we (NEDS) were trying to be everything to everybody,” David explained. “We never liked to see anybody stuck and always tried to help everyone out. However, from a business perspective that doesn’t always work. We needed to streamline our operation and review our goals,” David added. 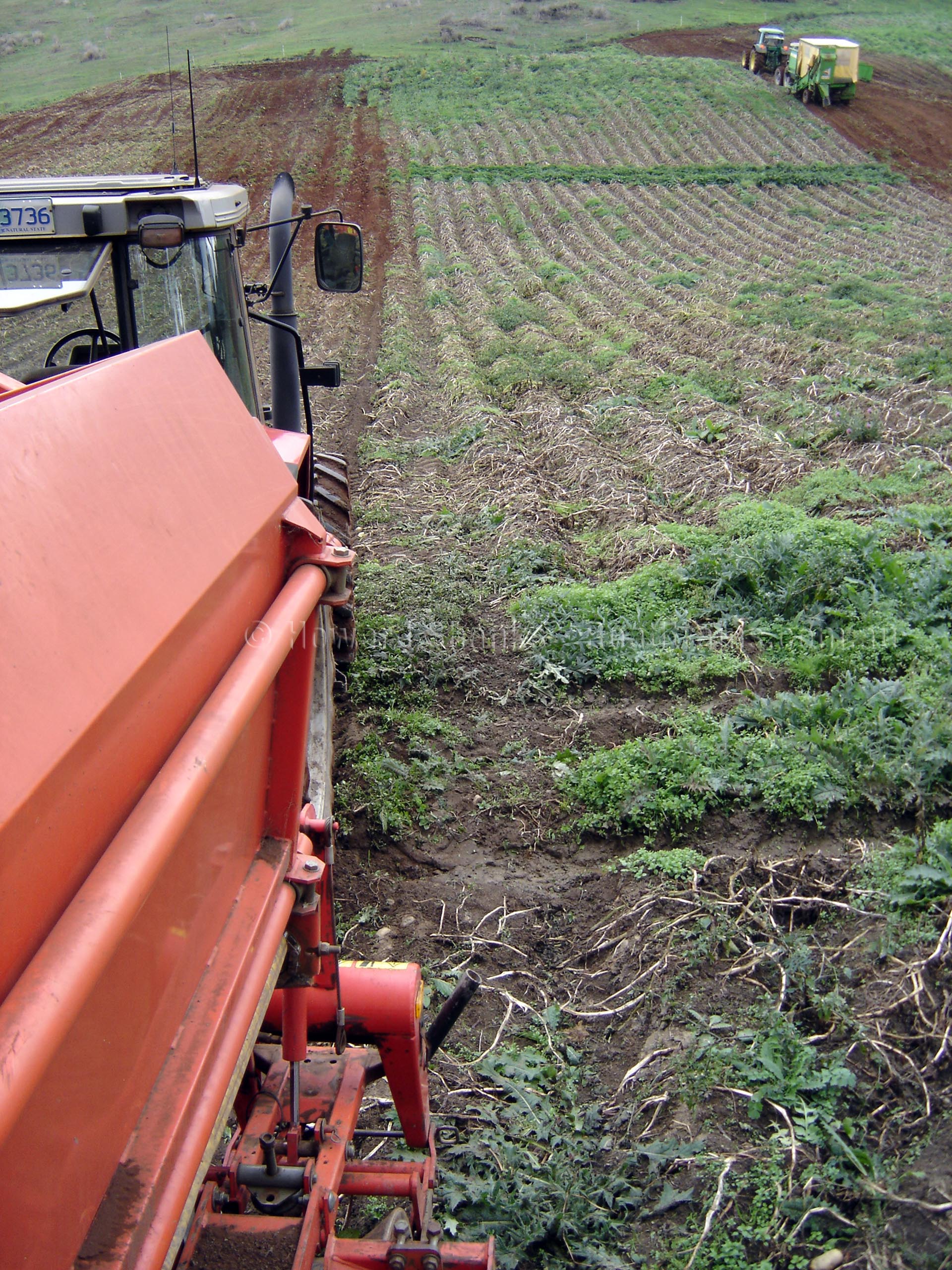 While this would appear quite an extreme move, the business had reached the stage where it needed to gain a clear direction before it became unmanageable. The decision to focus on bulk handling and transportation for key customers allowed NEDS Transport to better guarantee service of the highest quality.

“We made the decision to stick to specialised work in transporting of onions and potatoes from the paddock to Simplot’s facilities in Scottsdale and Ulverstone,” David explained. “We also utilise the trucks by swapping the spud bins for tippers with the local forestry when the harvest is over,” David added.

“Today we want to grow with our current customers and be selective when identifying new customers. It’s a period of consolidation.”

“There is something that I must add here”, David said fervently. “Neither myself nor NEDS would have achieved or be where we are today if it wasn’t for the behind the scenes efforts of my sister Cathy. Her tireless efforts are really the backbone of our company,” David explained.

“Most mornings, Cathy is up well before dawn and sees her husband Kent off in his livestock truck, but that’s another story. Then she does her school bus run before arriving at the office to start the paper work. During the day she’ll often ferry the truck drivers between trucks and paddocks. Like any trucking business there is always something to do and Cathy is usually always first to help out. I suppose you’d call her our rock,” David mused.

After a thoughtful pause, David added, “I sometimes wonder if Cathy really knows how much we all, that’s our clients too, appreciate her tireless efforts. Maybe this little story will go someway to letting her know …” 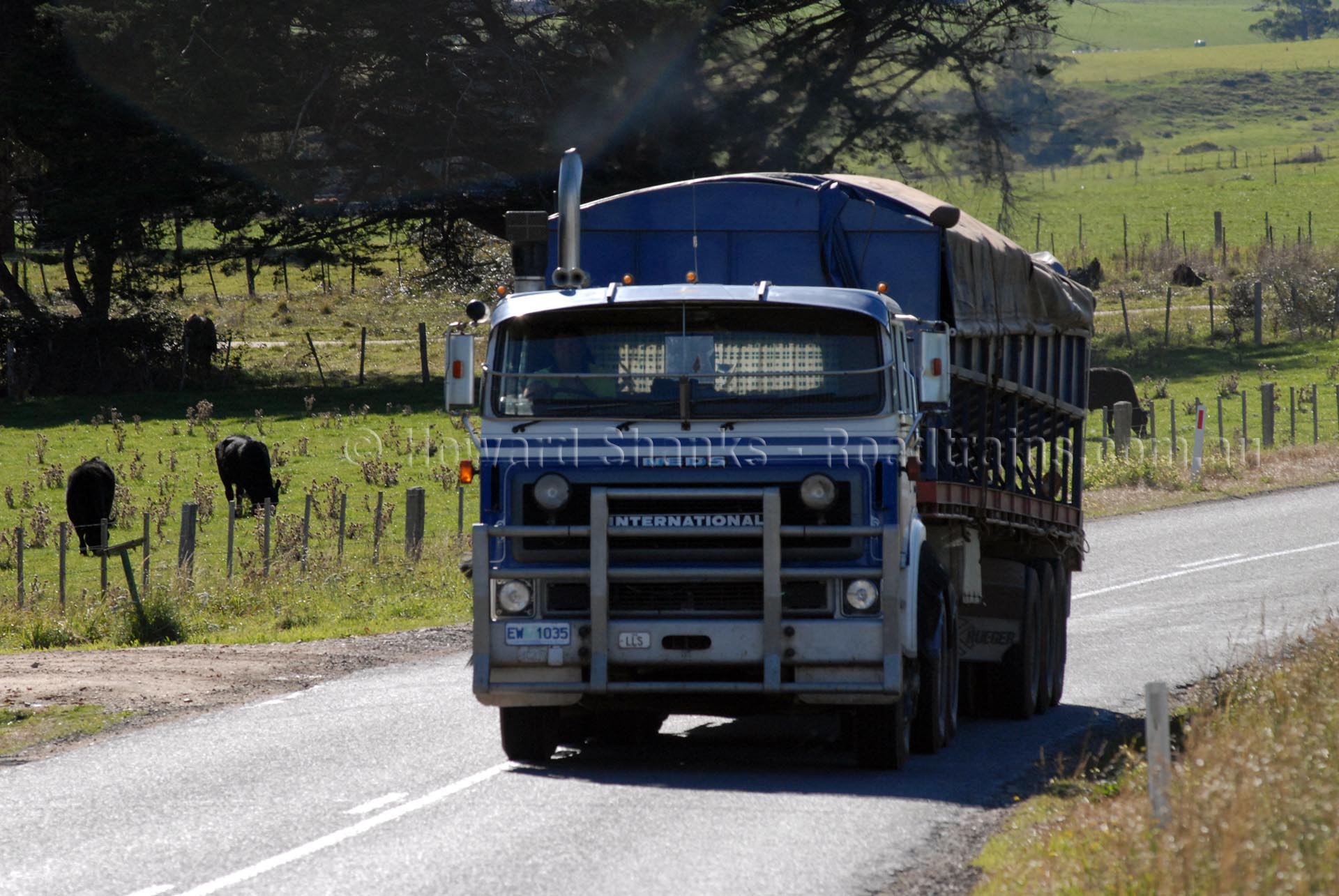 Consequently the general freight run was sold a few years back. “Many years ago we gave a young fella a start around the yard when he was a school kid, David recalled. “Anyway he started doing the run to Launceston with his brother and eventually when he got his license did it on his own. Now he owns that business.”

Tasmania’s potato industry is the largest sector of the State’s vegetable industry, making up approximately 70 percent of the total value. The annual harvest averages 380,000 tonne, which equates to approximately quarter of the nations potato production.

“The main advantages of potato production in Tasmania are the quality of the product and the continuity of supply of the product,” David informed. “This is due largely to the well-structured, fertile and well-drained red soils, availability of water and temperate climate without extremes in weather conditions.”

“What makes this area so good for growing crops is the ability the farmers have to irrigate their land,” David continued. “Back in the early seventies, the Government agreed to make the water of the nearby disused Cascade Dam (constructed 1934) available for irrigation. The scheme services around 60 properties in what’s now referred to as the Winnaleah Irrigation District through a 35-kilometer network of piping.”

David concedes like many transport operators that getting good drivers is one of the biggest challenges facing trucking companies. “It’s a little bit harder too in our case,” David revealed. “Because our work is seasonal it also adds to the challenge as most drivers really want full time positions. However, each year we seem to manage and usually get a good crew.”

There are six International T-Lines in David’s fleet with the majority powered by Cummins PT320 engines through nine-speed Roadrangers transmissions. There’s one that has a Cummins 400 Big-Cam-2 with a 13-speed box. “I know they are not the latest trucks around,” David said. “But they are and have been extremely reliable over the years and they are also very maneuverable in and round the tight gateways of the farms.” 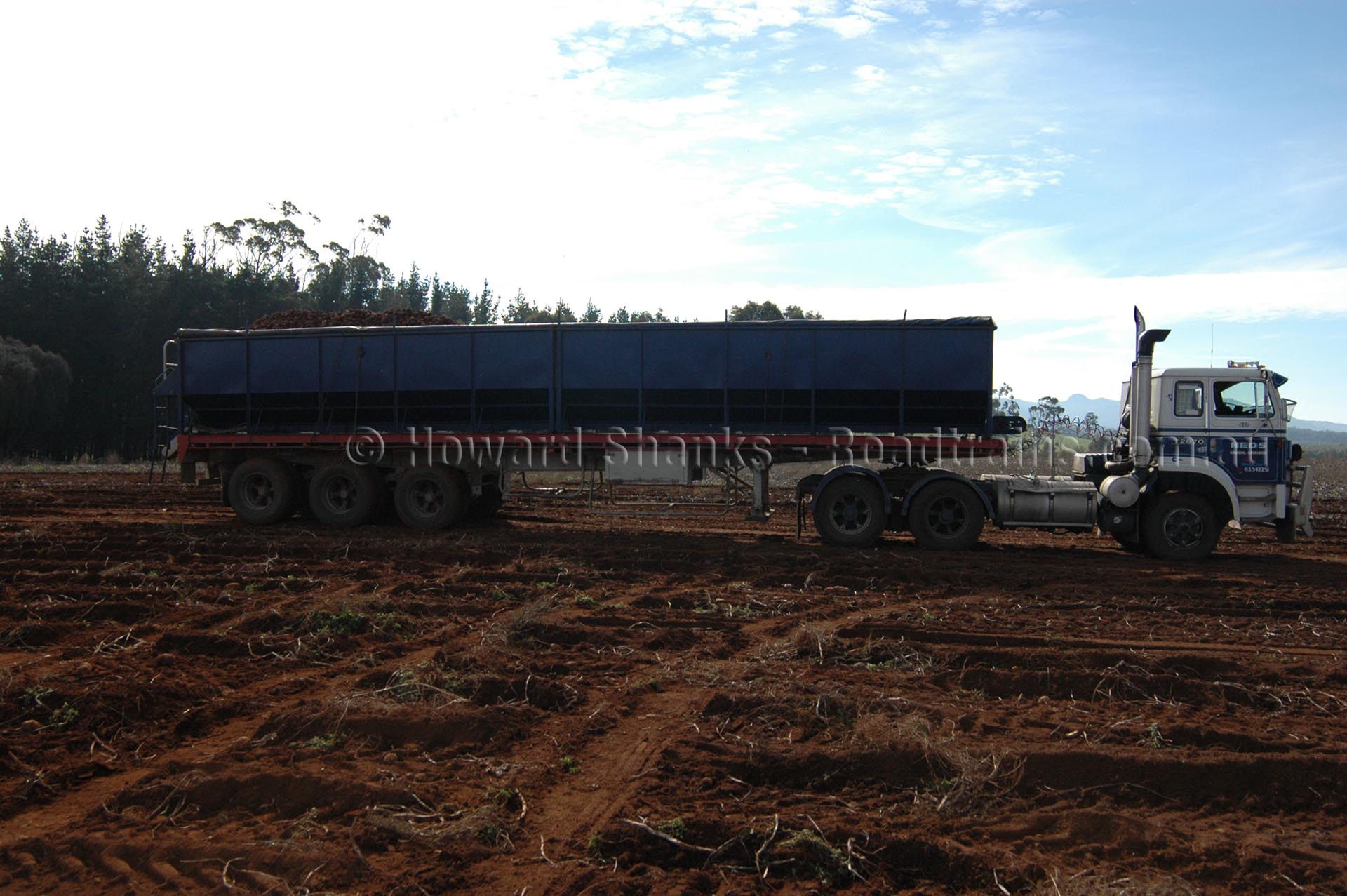 “In terms of vehicle usage these old T-Lines get it pretty easy compared to a mainland truck,” David continued, “It probably will take us ten or more years to clock up the same amount of kilometers an interstate truck would do in three or four years on the mainland. We have very short hauls, approximately 50 km leads with the potatoes, but the boys do a few loads each shift,” David smiled.

The trailers are purpose built and use an internal electrical conveyor belt to unload into the stackers at the Simplot storage facilities. “They are high productivity pieces of equipment,” David explained. “However they also require high maintenance to maintain there efficiency levels and they have little use for any other application, which means we look to get many years service out of them to recoup our capital investment.”

The first quarter siren had just sounded; the Bulldogs were in front by 26 points, as the next round of drinks were placed on the bar. “We’d better stop yapping and watch this game before it’s over,” David smiled.

And he was right, it was time to settle in, watch the game and reflect on remarkable efforts of this humble man who is undaunted by life’s challenges and manages everything from a wheelchair.